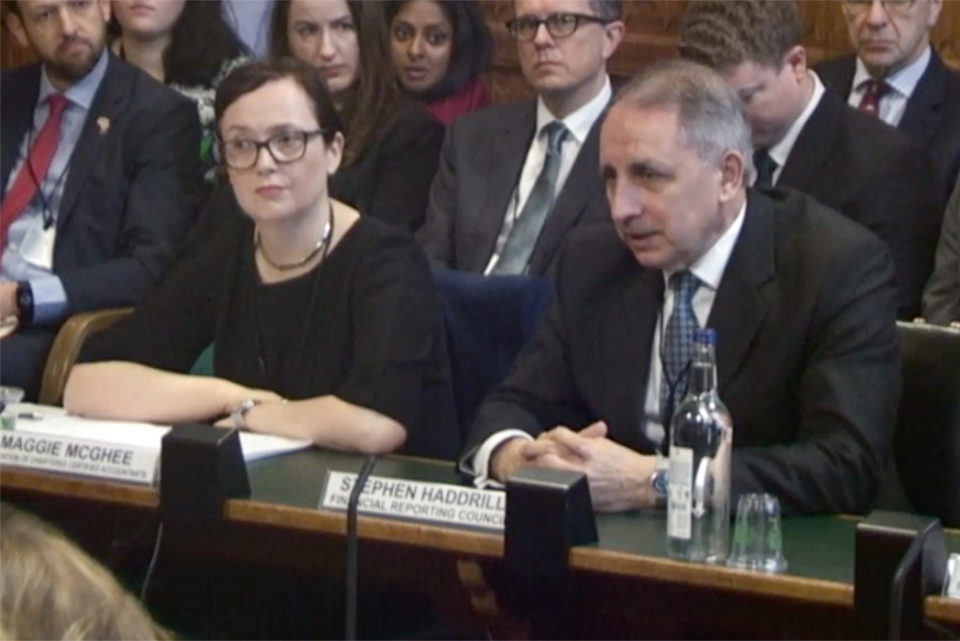 The head of the UK’s beleaguered accountancy watchdog said auditors are “clearly responsible” for finding fraud in companies.

Stephen Haddrill, chief executive of the Financial Reporting Council (FRC), said accountants too often buy into a “mythology” that they will not find wrongdoing while checking companies’ accounts.

“The auditor is clearly responsible for finding fraud in the company,” he told MPs today.

Whether auditors hold responsibility for spotting deceptive accounting has come under the spotlight in recent weeks, after the new boss of Grant Thornton said his firm was “not looking for fraud” when it undertook audits.

Speaking yesterday, the head of the government’s review into the future of audit said auditors should “probably not” be hunting for fraud, but said the matter should be looked into.

Read more: Auditors should not be ‘policemen’ – but that could change, MPs told

FRC boss Haddrill appeared in front of the Business, Energy and Industrial Strategy (Beis) Select Committee, chaired by Rachel Reeves, as part of a series of hearings about the audit sector.

His organisation has been subject to intense criticism over the past year, including an accusation by MPs that it has been “toothless” in its enforcement of audit standards.

The FRC was subject to a damning review conducted by Sir John Kingman, released in December, which described it as “a rather ramshackle house, cobbled together with all sorts of extensions over time”.

Kingman said the FRC had taken an “excessively consensual” approach to regulation, calling for it to be scrapped and replaced with a new statutory regulator, which he said should be called the Audit, Reporting and Governance Authority (Arga).

In November, Haddrill announced he would step down from the FRC by the end of 2019, saying “it should be the job of a new chief executive to lead the FRC when the way ahead is decided”.

Later that month, Reeves raised doubts about whether he would be able to maintain his position for that long. “I’m not sure whether he’ll be able to survive as long as he currently wants to,” she told City A.M.

That view was echoed by Kingman during a Beis committee hearing last month. The Legal & General chairman said the FRC needed a “new chief executive and a new board” as soon as possible, ahead of any legislation to create a new statutory regulator.

Haddrill told MPs today he could act “straight away” to begin changing the board if Kingman’s recommendations are adopted by the government, saying the process could begin at its next board meeting in March.

Read more: Audit’s perfect storm: How bean counters found themselves at the centre of a public uproar

The watchdog boss, who took up his position in 2009, said he had regrets that the FRC had not been more aggressive in pre-empting wrongdoing in audit, particularly in the wake of the crash a decade ago.

“Frankly, I think I should have had more foresight in the wake of the financial crisis than I did,” he said.

He said the FRC would likely need a budgetary boost to begin implementing changes to its operations. He said that would mean requesting an extra £4m to £5m per year on top of its current £36m budget.

Haddrill accepted Kingman’s suggestion of scrapping and replacing the FRC. “I think we need a statutory body to do this work, we shouldn’t have a private company with a slightly disparate set of powers pursuing what is actually a vital national interest,” he told MPs.

In an exchange with Reeves, the MP asked Haddrill why the FRC was not more open about when it has concerns over a company’s audit.

“Why isn’t this information in the public domain?” she asked. “The whole point of this inquiry and the inquiry into the collapse of Carillion is that audits are incredibly important, and you’re sitting on this information from last year of 15 or 20 audits that has been referred to enforcement.”

Haddrill defended the amount of time it takes the FRC to complete investigations into audits. “I think it’s utterly appropriate that the first thing that happens before the matter is publicised is a proper consideration about whether there should be a disciplinary investigation,” he replied.

Read more: Audit must reclaim its Victorian roots to win back public trust

McGhee told MPs that there needed to be a culture of firms giving auditors the time to raise concerns about finances, even if their suspicions proved incorrect. “It’s all very well and good if you find something… the vast majority of times you will exercise professional scepticism and it won’t be true,” she said.