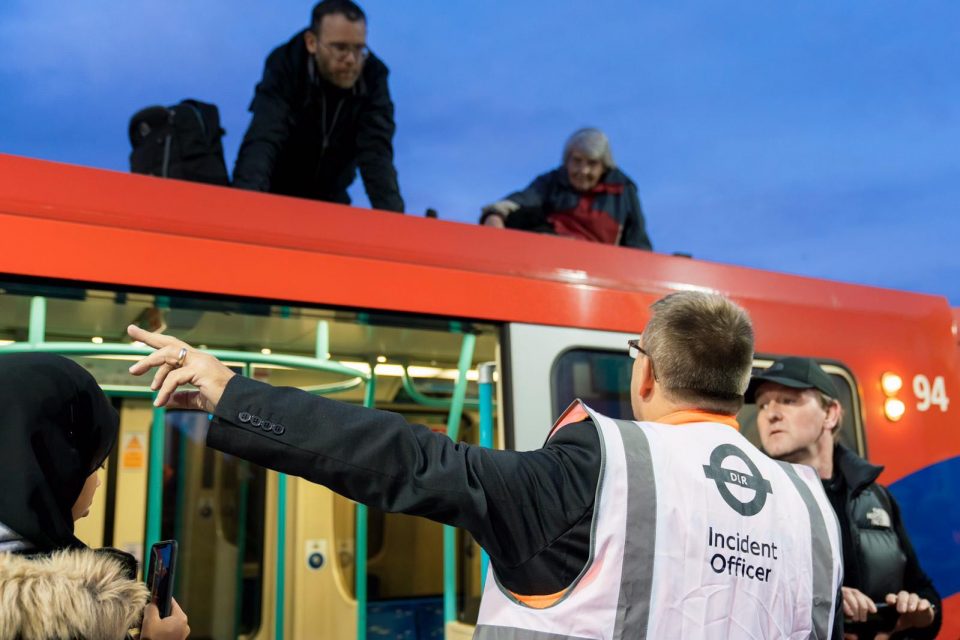 Eight arrests have been made after Extinction Rebellion protesters caused severe delays on the Docklands Light Railway (DLR) and Tube during rush hour today.

Furious commuters reacted by dragging a climate change activist from the top of a train before appearing to attack him.

Commuters into London’s financial districts faced a morning of rush hour misery as Extinction Rebellion protests brought services to a halt on the DLR and Jubilee Line in east London.

Transport for London and British Transport Police (BTP) cleared the protesters from the lines by 8.30am, however, letting service resume.

“Four arrests have been made in connection to the Stratford and Canning Town incidents,” BTP said.

Four people have also been arrested in connection with disruption at Shadwell.

At least one protester glued themselves to the roof of a DLR train at Shadwell station, with Extinction Rebellion calling the disruption “necessary to highlight the emergency and immediate action needed to avert climate catastrophe”.

The protests sparked fury among some commuters, however, and resulted in violent scenes at Canning Town when an activist was dragged from the top of a train to the platform.

Mayor of London Sadiq Khan said: “I strongly condemn the Extinction Rebellion protesters who have targeted the London Underground and DLR this morning.

“This illegal action is extremely dangerous, counterproductive and is causing unacceptable disruption to Londoners who use public transport to get to work. It is also an unfair burden on our already overstretched police officers.”

“The Tube & all modes of public transport are part of the solution to climate change, not the problem,” it tweeted.

“Can we kindly suggest you stick to protesting against those who create the problem. Not our industry, members + hard working commuters.”

But Extinction Rebellion spokesperson Robin Boardman defended the action, saying the disruption was necessary to raise awareness of the dangers of climate change.

“If this is what it takes to make them take notice before it is too late, then this is what we must do,” he said.

“None of us want to inconvenience ordinary people. That’s why we’re doing this in the morning when it will impact business as usual, and not in the evening, when people want to get home to be with their loved ones.”

The protest group said today’s actions are “intended to bring further economic disruption to the capital as part of the ongoing campaign to convince the government to take meaningful action on the climate and ecological emergency”.

“Those who obstructed services are in custody and will be dealt with robustly. This type of action is completely at odds with what Extinction Rebellion are campaigning for and we will continue to urge them to not target any rail network.

“However, it was also concerning to see that a number of commuters took matters into their own hands, displaying violent behaviour to detain a protester at Canning Town.

“Understandably, the delay to passengers’ journeys would have been annoying, but this level of response was unacceptable. We are now investigating this morning’s events at Canning Town in its entirety.”

O’Callaghan added that the Tube is one of London’s greenest transport networks, saying Extinction Rebellion has contradicted the point of its own protests by targeting the London Underground.

Extinction Rebellion activists were defying an order from the Metropolitan Police that on Monday night banned them from protesting in the capital. The group has denounced the ban as “draconian”.

The group’s decision to target London’s tube follows a day of protests in the centre of the Square Mile on Monday, when activists demanded banks stop funding the fossil fuel industry.

Some of the UK’s biggest banks have defended themselves against Extinction Rebellion’s protests. Santander said on Monday that it is “one of the leading providers of green finance in the world, raising close to €50bn [£43.4bn] between 2015 and 2018”.