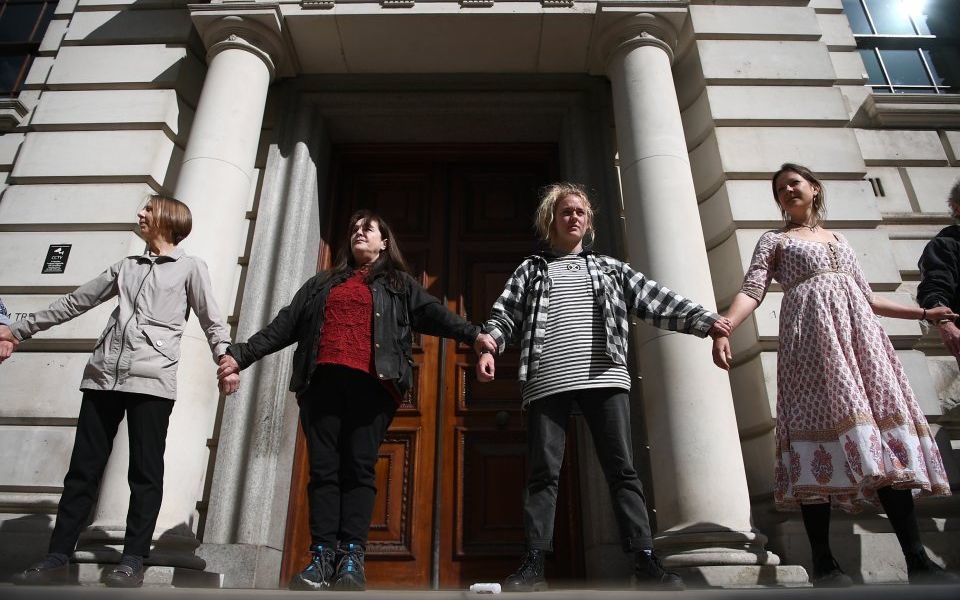 Environmental protesters have glued themselves to the HM Treasury building as part of a day of action targeting the financial industry.

More than 300 Extinction Rebellion activists staged protests across the Square Mile and Canary Wharf as they shifted their focus from London landmarks to the financial sector.

Protesters demanded that the finance sector “tells the truth” about its role in the “climate and ecological emergency”.

(Source: Getty) Protesters with their hands glued together stand outside the Treasury building in Westminster

A total of 26 protesters were arrested outside the London Stock Exchange (LSE) after protesters wearing masks, black suits and ties blocked the entrance to the building.

Having a sing outside @hmtreasury, demanding system change and an end to fossil fuel subsidies.

Goldman Sachs’ office was also the target of a demonstration this morning and eco-activists blocked the roads at Bank junction.

Meanwhile, activists staged a demonstration at Canary Wharf for the second time in two weeks as protesters climbed on top of a Docklands Light Railway train during the morning rush hour.

Last week three people were arrested following a similar demonstration at the station. Three people are currently being held in police custody after pleading not guilty on disruption charges.

The day of action comes as the protest group draws its two-week long demonstration to an end. Extinction Rebellion said it will remove the remaining blockade at Marble Arch this evening, after closing the landmark for two weeks.