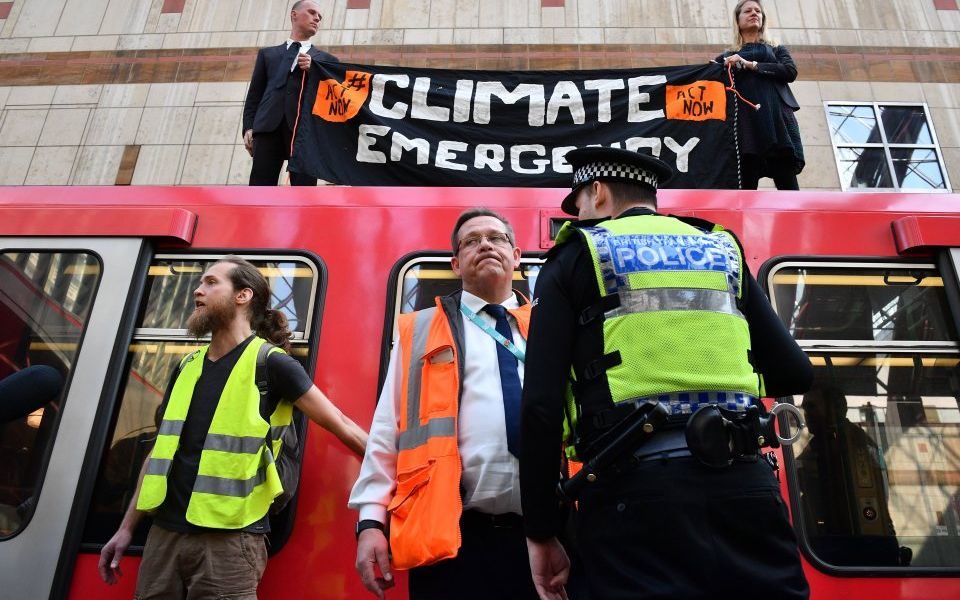 Climate change protesters have glued themselves to a DLR train at Canary Wharf as police reportedly closed access to parts of the station in response to the disruption.

Extinction Rebellion activists today stepped up their London protests by targeting the capital’s transport network, clambering on top of the carriage of a Docklands Light Railway train to unfurl a banner reading “Climate Emergency”.

Protesters glued themselves to the sides and roof of the carriage, preventing it from leaving.

Police were called to the scene at 10.50am after reports of the obstruction.

A protester warned police his hands were superglued to the carriage window (Source: Getty)

“Units are in the process of responding, including specialist teams trained in protest removal,” a spokesperson for British Transport Police (BTP) said.

BTP arrested a man on suspicion of obstructing the railway and took him into custody.

The DLR was only running minor delays between Bank and Lewisham, with a good service on all other lines, according to Transport for London.

They also shut down the Tube’s Wi-Fi network this morning as a preventative measure to stop activists from coordinating between different Underground stations.

Police manage to remove the protester before dealing with activists on top of the train (Source: Getty)

“We will not tolerate any activity which disrupts the millions of passengers who rely on using the rail network in London,” superintendent Matt Allingham said earlier.

“During the next 24 hours, these intelligence-led patrols will be in place to help keep everyone safe and to ensure that disruption is kept to a minimum.”

Yesterday the Metropolitan Police warned the protests had closed 55 bus routes and affected half a million people.

The pair on top of the train were later removed by police, who mounted the carriage with a ladder (Source: Getty)

The Met has made 290 arrests in a bid to clear routes after ordering the protesters to confine demonstrations to Marble Arch in an effort to keep London traffic running.

However, Extinction Rebellion activists have continued to swarm over London landmarks, blockading Waterloo Bridge despite police making 177 arrests there alone.