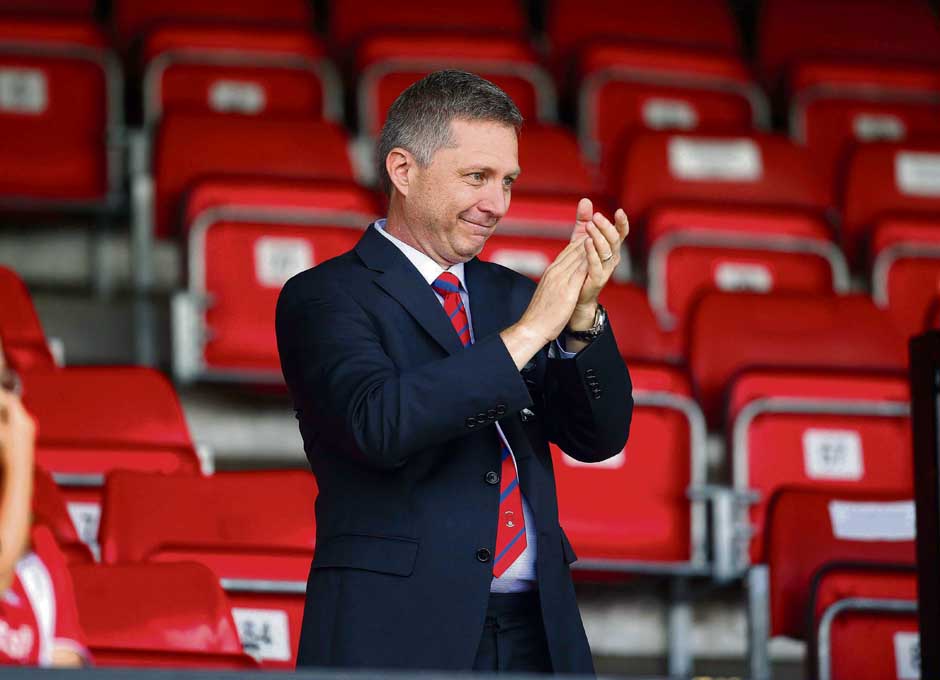 April 2017 marked the end of the east London club’s 112-year stay in the Football League – the culmination of a nightmare season in which five managers came and went.

Three years after missing out on promotion to the Championship by the narrowest of margins – losing on penalties to Rotherham in the 2014 play-off final – the downward trajectory was complete.

Under the unfathomably poor stewardship of Italian waste management magnate Francesco Becchetti, Orient were forced to brace themselves for life in the National League.

While O’s fans vented their anger at the brazen mismanagement which had sent their club into a rapid spiral, on the other side of the Atlantic an American businessman was getting excited. His dream of owning a sports club had finally been set in motion.

Leyton Orient missed out on promotion to the Championship in 2014 on penalties (Source: Getty)

Having made his money in tech, Teague was looking to branch out. Basketball, baseball and Nascar were mulled over; ice hockey was suggested. He had made written offers for two Major League Soccer clubs and one in the second-tier United Soccer League, while also researching sides in Colombia, Argentina, Brazil, Italy, France, Spain, Portugal and the UK.

“I’d been looking for a club for two or three years before I got the call from Nigel,” Teague tells City A.M. “When he called me and said, ‘We want you to be a part of our family club’ I said yes. It worked.”

That Nigel was Nigel Travis, chairman of Dunkin’ Brands and life-long Leyton Orient fan. Having been born in Woodford, on the outskirts of east London, Travis moved to the US to run video chain Blockbuster and then Papa John’s Pizza.

The two businessmen shared mutual friends and their interests overlapped. Travis needed investment for his consortium to help save a club he had supported since 1959; Teague needed the chance to see his money make a difference.

Travis had already begun negotiations to take Orient out of the hands of Becchetti, but in the spring of 2017 they were on hold as the team circled the drain. Teague wasn’t fazed by the impending drop.

“I didn’t care if they got relegated or not, but by the time I got involved everybody knew we would be relegated,” he says. After visiting Leyton in the April “under a cloak of darkness”, he was ready to commit to sparking Orient’s revival.

“I wasn’t smart enough to know the difference between level four and level five – League Two and the National League – what it all meant,” he admits. “It means a lot more than I thought it did.”

While the workings of the English Football League system weren’t his forte, as principal investor and vice-chairman Teague was braced to face the mess Becchetti had left behind. Yet even still, he couldn’t help but be shocked.

“I knew we were in a turnaround and I’m used to doing turnarounds, so it wasn’t like this one was worse or better than others,” he says. “But I do admit that I haven’t really been involved in a turnaround where I walk in and they don’t even have a working bank account – that was new. Or where they don’t have enough employees to even maintain the business. If you only have nine players signed you don’t have enough to play. That was a little unusual.”

While stepping in as part of the solution to the Becchetti problem and alongside an Orient supporter in Travis was always likely to see Teague get off on a good foot, he has had to overcome some negative preconceptions.

“There’s always a hesitancy in any business, but especially in a fanbase,” Teague explains. “Some people believe the devil you know is better than the one you don’t. There are some people in our fanbase who are always questioning. They have concerns – either about me being an American, or me being a Texan, or not being English, or not being European, not being whatever. That just takes time to overcome. It’s something I’m used to and I think we’re still overcoming it in some ways.”

The simple fact that Teague originates from Texas and speaks with a thick southern drawl made some O’s fans weary to begin with. After all, American investment in English football hasn’t always been met with praise.

Arsenal owner Stan Kroenke is one of the American businessmen to have invested in English football clubs (Source: Getty)

“The biggest thing our fans are worried about is the Americanisation of the club, not necessarily whether there’s an American owner. They want it to be an English football experience.”

Orient’s current lowly position marks Teague’s involvement out as distinct from other transatlantic moneymen – and his motivation does too.

“This isn’t about making money. I love making a difference and I think I can. I love to contribute,” he emphasises. “Most people think the goal is to make money. No, the result is making money. The goal is building a great club or company. If you build a great club then you might make money. But if you start out trying to make money and are focused only on making money, sometimes it’s really hard to create a great company. It’s better to start out trying to build a great company and see where that goes.”

Having stabilised and finished 13th in the National League last season, Orient are now hoping to begin their ascent. After 16 games Justin Edinburgh’s side have suffered just one defeat and sit third in the table. Positivity has returned to Brisbane Road, with last Saturday’s Non-League day pulling in a sell-out crowd of 6,825 to see a 0-0 draw with Hartlepool. In a nod to the new regime, the club has started selling donuts iced with the Orient crest – dubbed "Onuts" – and they have proven to be a big hit with the home faithful.

Teague has high hopes for Orient, but is realistic. This will be a slow burn. “Our objective is to try and get promoted every three or four years,” he states. Rebuilding and creating a sustainable club, which is financially sound in the long-term are the main goals.

He may by his own admission struggle to understand back-passes, offsides and the difference between formations, but Teague is focused on the issues off the pitch. He speaks daily with Travis and has 10 monthly, week-long trips to Leyton planned throughout the season.

With the club stabilised, positivity has returned to Brisbane Road this season (Source: Getty)

When he’s in the UK, Teague makes the most of it, visiting schools, attending community events and overseeing a pen-pal programme between east London and Texas, as well as chatting to as many people on Leyton High Road as he can.

On a match-day he estimates he speaks to between 400 and 500 fans. “Building a fanbase is paramount to what we’re doing,” he says. “It’s really important I interact with the fans and tell them that we appreciate them.”

After experiencing the prolonged nightmare of two relegations in three seasons and having been encouraged by Teague’s enthusiasm and commitment, Leyton Orient fans certainly appreciate Teague.