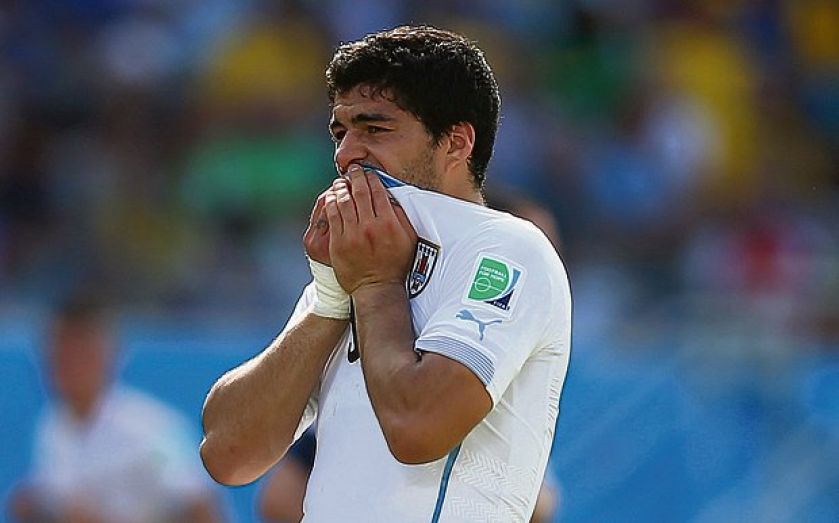 URUGUAYAN football chiefs claim that Luis Suarez did not bite Italy’s Giorgio Chiellini and that allegations against the Liverpool striker are the result of an English, Italian and Brazilian conspiracy.

World governing body Fifa was last night considering whether to ban Suarez for the rest of the World Cup and possibly beyond after Chiellini accused the South American of sinking teeth into his shoulder during Tuesday’s group match.

But Uruguay football chief Wilmar Valdez said evidence against Suarez was not “convincing”, while the player’s lawyer Alejandro Balbi, also a board member of the country’s association, went further, arguing that the allegations were motivated by sour grapes and an English vendetta. Valdez and Balbi were due to present those views to Fifa’s six-man disciplinary committee yesterday in Brazil.

“We don’t have any doubts this has happened because it’s Suarez involved and secondly because Italy have been eliminated. There’s a lot of pressure from England and Italy,” said Balbi.

“There is a possibility that they ban him, because there are precedents, but we’re convinced that it was an absolutely casual play, because if Chiellini can show a scratch on one shoulder, Suarez can show a bruised and an almost closed eye.

“If every player starts showing the injuries he suffers and they open inquiries for them everything will be way too complicated in the future. We’re going to use all the arguments possible so that Luis gets out in the best possible way.”

Suarez’s lawyer also implied that it was in the interests of tournament hosts Brazil that the current English player of the year be banned for the later stages.

It is the third time Suarez has stood accused of biting an opponent during a match, following incidents with Liverpool in 2013 and former club Ajax in 2010 which earned bans of 10 and seven games respectively.

Fifa rules stipulate he could be banned from all football for up to two years, though leading sports lawyer Daniel Geey argued that would be a “disproportionate response”. “If found guilty, it looks unlikely he will play again in the World Cup, but a much longer ban may seem beyond what would be deemed proportionate and reasonable,” added Geey, of Field Fisher Waterhouse.

Suarez’s boot maker Adidas said it was awaiting Fifa’s verdict – due late last night or today – while his sponsor, poker website 888.com, said it was reviewing its deal with him.