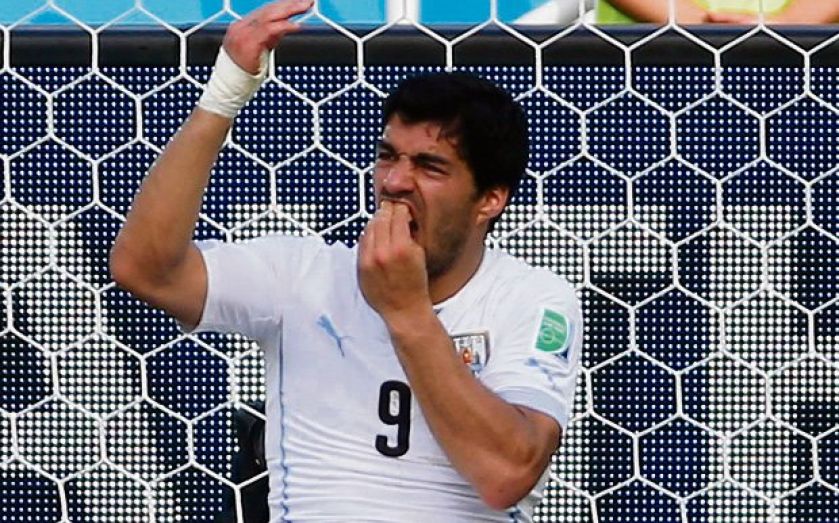 ADIDAS last night dropped Liverpool striker Luis Suarez from its World Cup marketing campaign after he was handed a four-month ban from all football activity for biting Italian Giorgio Chiellini.

The sportswear giant also condemned Suarez’s actions and warned it would be holding talks with the Uruguay player regarding his obligations under a boot deal thought to be worth £1m.

His ban – the longest in World Cup history – also includes a suspension from nine competitive Uruguay games, as well as a £66,000 fine, and means he cannot even set foot in a stadium again until late October.

Furious Uruguay chiefs launched an immediate appeal, though he is certain to miss tomorrow’s last-16 match against Colombia regardless, while Liverpool refused to comment on a sanction that casts further doubt on the Anfield future of the controversial 27-year-old.

Adidas said in a statement that it “fully supports” the punishment handed down by governing body Fifa’s six-man disciplinary committee, which convened on Wednesday and delivered a verdict yesterday.

“Adidas certainly does not condone Luis Suarez’s recent behaviour and we will again be reminding him of the high standards we expect from our players. We have no plan to use Suarez for any additional marketing activities during the 2014 Fifa World Cup.”

Suarez’s ban, for biting Chiellini on the shoulder during Uruguay’s 1-0 group-stage win on Tuesday, means he is not even allowed to train with Liverpool during his ban and resulted in him having to leave his national team’s hotel yesterday.

Uruguay football chief Wilmar Valdez maintained the country’s steadfast defence of their star player and confirmed an appeal against what he called “a completely exaggerated and abusive sanction”.

Captain Diego Lugano, formerly of West Brom, said he felt “impotence, indignation”, adding: “We’d all like a fairer world, but that world does simply not exist.”

Fifa vice-president Jim Boyce said Suarez’s third career ban for biting an opponent, following previous incidents with Liverpool and Ajax, was “fully justified”. Boyce added: “Hopefully, he will realise now that behaviour of this type will not be tolerated under any circumstances.”

Suarez was also banned at the last World Cup after deliberately stopping a shot on the line with his hand.

Fans haven’t ad enough
Adidas may have cut Luis Suarez from remaining World Cup marketing activity but they have not been able to stop fans flocking to pose for pictures next to their billboard of the toothy frontman by Copacabana beach.

Francescoli: Fifa holier than thou
Uruguayans were not slow to condemn Fifa for throwing the book at Suarez, but the country’s golden boy of a previous generation, Enzo Francescoli, provided perhaps the most colourful distillation of their anguish. “The decision was shameful and disgusting,” he said. “This is a misuse of the power of Fifa against football players. They want them to be more Catholic than the Pope.”

Games he’ll miss – if he stays
Suarez is likely to miss at least a dozen games for Liverpool and maybe more, depending on the ban start date: