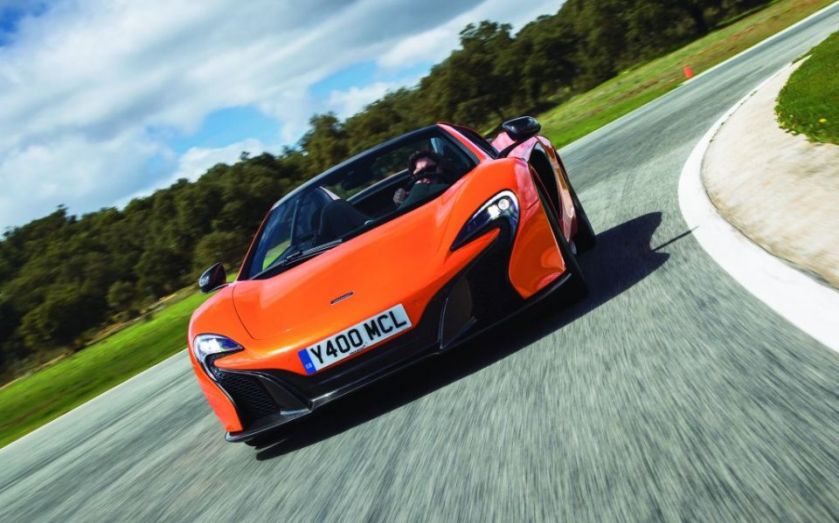 Everyone has their “happy place”. Most people think of a tropical island, a postcard pinned to their office wall. I don’t. Not any more. Now I have a different reference point for unbridled joy: pulling down the driver’s door of a McLaren 650S, firing its twin-turbo and racing through all seven gears in a breathless, screaming, head-turning sprint.

I was staying at the most luxurious hotel in Marbella, the Finca Cortesin, which boasts three pools that would look at home in a Beyoncé video, a par 72 golf course and one of the best Japanese restaurants on the Mediterranean in Kabuki Raw.
In the courtyard of this haçienda awaited my Tarocco orange 650S Spyder, glowing zestily under the Spanish sun. You can have a McLaren in any colour you want, but the standards from the 650S’s swatch book are Fisher Price bold. McLaren’s storied Formula One team has long held a cold, clinical image and, for the past 18 years, its racing cars have all been a corporate shade of silver-grey. It’s refreshing to see its automotive wing have some fun. Onlookers stare like zombies, while other road users swerve across lanes as you fill their mirrors.
Those butterfly doors, a throwback to the original McLaren F1 road car, give it an other-worldly appearance. And a supercar should look intergalactic. It makes a Ferrari 458 – this car’s chief rival – feel buttoned- up.
The 650S is the replacement for McLaren’s MP4-12C, which made its debut four years ago. Since then this relatively small and young sports car constructor has cranked out a new model every year, including a 12C Spyder and the incredible P1 hypercar. The 650S is available in coupé and roadster form; the coupé comes in at £195,000, the Spyder £215,000. That’s a little more than the 12C but you get a lot more for it: more power, more downforce, more torque, less weight, carbon ceramic brakes as standard. In performance terms it trumps even the 458 Speciale, Ferrari’s most racy V8 to date. 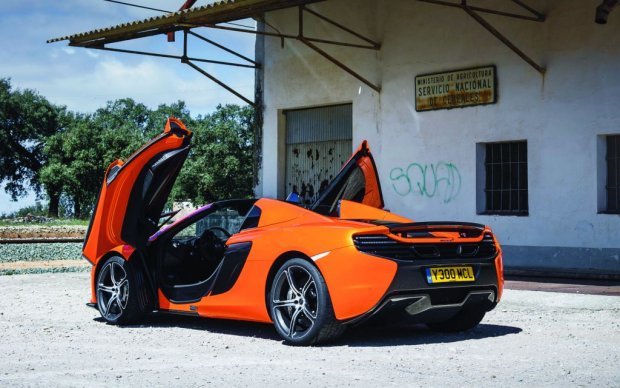 The MP4-12C was an attractive car by any standards but it lacked identity compared to rival Ferraris, Astons and Lamborghinis. Perhaps not surprising, since the competition has been honing its visual identity for many more decades – in Aston’s case a full century. The most noticeable change can be seen in the nose of this new Spyder. It inherits the P1’s frontal architecture that includes headlights modelled on McLaren’s logo. The rear remains largely unchanged from the 12C. If you’ve never clapped eyes on a McLaren, trust me, it looks awesome.
The car wasn’t the only star at the Finca Cortesin that morning, though. Having breakfast on the terrace I heard a rich, authoritative, familiar voice bellowing between mouthfuls of croissant. Could it be? Yes, it was. Sir Patrick Stewart was sat at the next table. How apt – and a complete coincidence – that the Next Generation captain of the USS Enterprise should be holidaying at a resort full of space-aged McLarens.
Sir Patrick, it turns out, is a speed freak. Despite his 74 years and a garage full of heavy old Jaguars he was eager to engage with the 650S. We swept out of the hotel’s gates and onto the Autoroute, me in pursuit and playfully swapping position with Sir Patrick. Then he nailed the throttle, selecting warp speed, and hit 170mph as he bolted for the horizon.
No stranger to topless supercars, Marbella, on Spain’s sun-drenched Costa del Sol, has attracted the jet-set for years. Sean Connery comes to improve his handicap while George Clooney tops up his patina. It’s also home to great sushi, steak, and sideways drifting, as I was about to find out.
An hour north of Marbella, at the end of some of the most sublime mountain-skirting routes I have ever driven, is the Ascari circuit, a private playground for millionaire boy racers and their toys.
This members-only “race resort” is the brainchild of Dutch oil millionaire and entrepreneur Klaas Zwart, who has this world-class race track as his driveway. Membership starts at €14,000 a year with a three year minimum, and there’s a €45,000 joining fee.
Twenty-six turns; tight, sweeping, ascending, descending, the lot. This high-octane nirvana is intentionally devoid of advertising boards; instead it’s peppered with oaks, fig trees, ruined stone buildings and discrete barriers.
I steered around the 5.4km circuit feeling for the car’s limits, which are almost endless. The 650S talks to you through every turn but it never snaps.
Zero to 125mph is a mesmerizing 8.6 seconds – 0.4 faster than the 12C. I don’t recall driving anything faster. Alert the UN Security Council; this is a Pirellishod missile. It weighs just 1,330kg. Its monocoque – the technical term for the integrated chassis/body – is made from carbon-fibre, making it light and strong. Carbon is at the heart of McLaren’s DNA. It was they who first introduced the carbon monocoque to Formula One in 1981, something that’s been adopted by every race team since.
The interior comes in a choice of leather with electric seats or Alcantara – a patented material used in racecars – with lightweight “bucket” seats. Carbon cuts down the middle facia with a narrow sat-nav screen and dynamic-control switchgear. It all feels very Tron, but also comfortable. Despite stiffer springs that improve cornering on the open road it feels even more refined than the 12C, which was already a class leader when it came to composure. On the twisting Andalusian roads the McLaren pounces with ferocious velocity, darting out of one hairpin into the next.
The noise from the V8 engine – positioned behind you – is best appreciated with the roof up but the separating rear window open, which ensures the twin-turbo symphony fills the cabin. It’s a scream rather than the roar you get from a Ferrari, and to be honest I prefer the latter, but that may be the only thing the 458 has over this sensational piece of engineering.
Most people would still prefer a Ferrari, but the McLaren is the connoisseur’s choice. It’s a trendsetter, a slice of scientific perfection. No wonder Patrick Stewart felt at home.