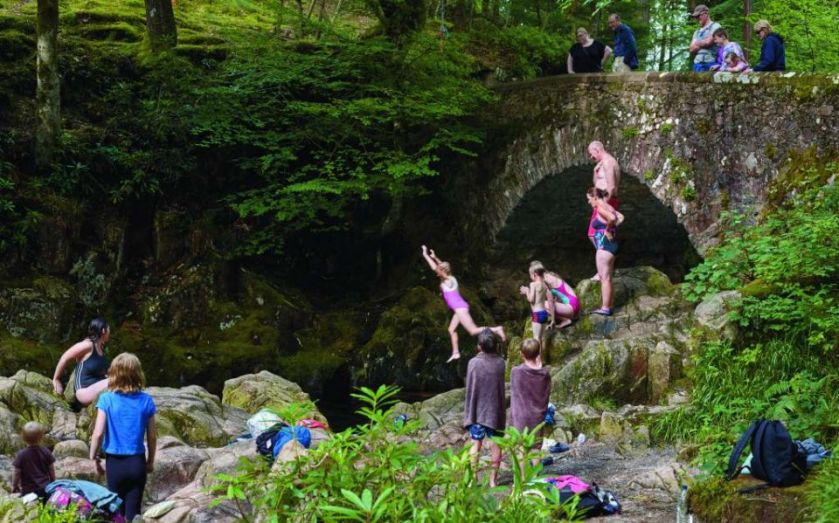 Simon Roberts is a landscape photographer, but his real interest is in people. His pictures explore the way we interact with the land, how a sense of place informs a sense of identity, and how Britain’s long and varied history intrudes on modern life. At first glance the scenes he captures look unremarkable, but the richness of the images – made possible by a large-format camera – and subtle details within them lend his photographs an epic quality unbeknown to the people who populate them.
“In most of my photographs we witness the somewhat mundane ways in which we interact with the landscape – walking the dog, diving into a river, cycling along a tow-path – perhaps with no sense of the historic significance of the place we’re passing through or using,” says Roberts. “I’m also looking for subliminal signals in the landscape, capturing a sense of tension just under the surface of the photograph – the police car in Kielder Water, the jockeying for position to take a picture at Flatford Mill, the managed pathways at Stonehenge, the gas delivery van ‘spoiling’ the view of Sheringham Park.”
Roberts won plaudits for Pierdom, a 2013 study of Britain’s coastal towns. For his latest project, National Property, he takes his camera inland for a series focusing on heritage sites across England, a thematic continuation of a life’s work that started with We English in 2009.
Simon Roberts: National Property, is at Flowers Gallery, 21 Cork Street, 8 July–8 August
Share:
Tags: Bespoke