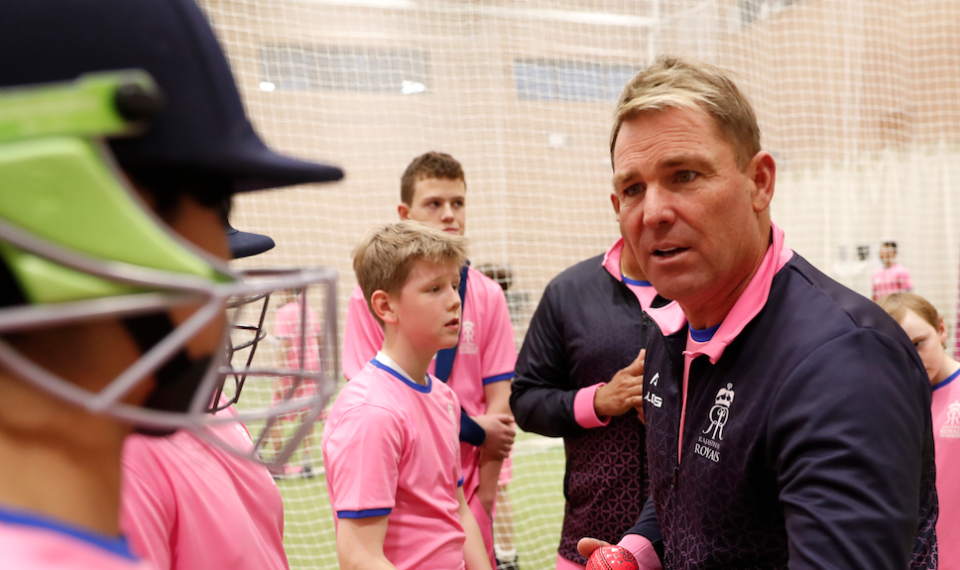 The original and biggest Twenty20 cricket league resumes on Saturday, and while millions around the world will be tuning into the Indian Premier League, its franchises are hungry for more eyes and ears.

Launched in 2008, the IPL has developed at an unprecedented rate to become a hugely successful, mammoth global entertainment product that has spawned an ever-increasing number of T20 leagues which are shaping the future of cricket.

Having been there at the start, and won the inaugural edition of the IPL, Rajasthan Royals are now at the forefront of identifying the new frontiers.

The Jaipur-based franchise from the north-west of India have, like others, formed their brand around their star overseas players, but also through unearthing young, talented local players.

But times have changed and 11 years on from where it all began the Royals are keen to stay ahead of the curve. With their plans in Rajasthan well-laid and their founding principles still in mind, they have branched out in search of new talent and new fans.

The Royals this week announced they have taken over the Star Cricket Academy at Reed’s School in Surrey, re-branding it the Rajasthan Royals Academy to become the first IPL side to set up a base in the country.

The academy, which has already born fruit in the form of Surrey trio Ollie Pope, Amar Virdi and Ryan Patel, signals Rajasthan’s intent to stay ahead of the game.

“We have always been focused on discovering potential, and investing in youth development,” the Royals British owner Manoj Badale tells City A.M. “We are the first IPL team to have a youth side and we have given more IPL debuts that any other team, so the investment into an international network of academies is a logical brand extension.

“We will wait for the learnings from our UK academy first, but the hope is that this could be extended – especially in North America and the Middle East.”

Besides their raft of talented players, which includes England stars Jos Buttler and Ben Stokes, the smiling public face of the Royals is Shane Warne, with the former captain, coach, consultant and mentor now their brand ambassador.

The former Australian leg-spinner led Rajasthan to the IPL title in 2008 – a trophy which remains their only success – and he is a passionate advocate for the franchise and the tournament as a whole.

Rajasthan Royals are the first IPL side to launch an academy in the UK (Source: Getty)

“Innovation is one of the big things we stand for and untapping young talent. The amount of money we put into grassroots is enormous. We’re looking not just at cricket, but the social responsibility that we have for the community. I think the Royals are leading the way there.”

While the positive intent of developing the next generation is a noble one and the hope of discovering the next Warne is an alluring prospect, the establishment of a UK base has other more tangible benefits.

Badale says “the nationalities of the players are irrelevant” when putting together a squad in the IPL’s auction process, but the Royals’ attractiveness to a UK audience is clear. With Buttler and Stokes joined on the roster by Sussex’s soon-to-be England-qualified Jofra Archer and Lancashire’s twice-capped Liam Livingstone, Rajasthan have positioned themselves, by coincidence or not, as the English audience’s go-to franchise.

Everyone wants an IPL

The IPL’s “pretty amazing” business model, as Warne puts it – which was valued at $6.3bn last year by Duff & Phelps – has seen similar tournaments spring up all over the world, fighting for a place on cricket’s calendar, the best players and, most importantly, viewers.

While the IPL is the market leader, the T20 arms race means franchises like the Royals still need to market themselves and Warne believes the Indian diaspora is an area for growth.

“Some of these people haven’t had the opportunity to see their heroes play,” he says.“This is a real opportunity now and franchises are thinking: ‘How can we capitalise on the global interest?’”

There is now a T20 league for every month of the year, with cricket’s Associate nations rightly identifying them as a way to develop. But despite the huge spike in competitors Royals owner Badale thinks there is room for everyone.

“The future looks healthy, but essentially you will have two or three major leagues and a number of feeder leagues,” he says. “The mistake that [Australia’s] Big Bash and [England’s upcoming competition] The Hundred have both made is to not have private investment. This will constrain funding, and ultimately the growth of the tournament.”

The England and Wales Cricket Board is still to announce all the details of its much-debated fourth format, which will bring shorter games of 100 balls per side from next year, but Warne, for one, is open minded about its benefits.

“When anything is new, strategy and tactics are involved – 10-ball overs could be used – that excites the players to try and get ahead of the opposition or another franchise,” he says. “To come up with different plays, a style of play, what sort of advantage you can get, to work out the right way to play it, that’s the fun and exciting thing about it.”

The 49-year-old, who has ties to Hampshire following seven years playing at the county, has had discussions with those involved and is keen to be involved in some capacity. For now, however, his thoughts are on the immediate future, the IPL and expanding the Royals’ empire worldwide.

City AM spoke to Rajasthan Royals brand ambassador, Shane Warne on the launch of the team's UK Academy