On Friday, 27 August, Manchester United announced that they had re-signed Cristiano Ronaldo – the five-time Ballon D’or winner who most recently plied his trade at Juventus. The club reportedly pipped cross-town rivals Manchester City to his signature.

Data from YouGov BrandIndex UK shows that, in terms of Manchester United’s overall brand, it’s been a grand homecoming so far. Between August 26 and September 9, the Red Devils’ Buzz scores – a measure of whether a consumer has heard anything positive or negative about the club in the past week – rose from 2.8 to 13.9 (+11.1), while Word of Mouth scores, which measure whether the public have recently spoken about a particular brand with friends and family, rose from 8.9 to 18.7 (+9.8). 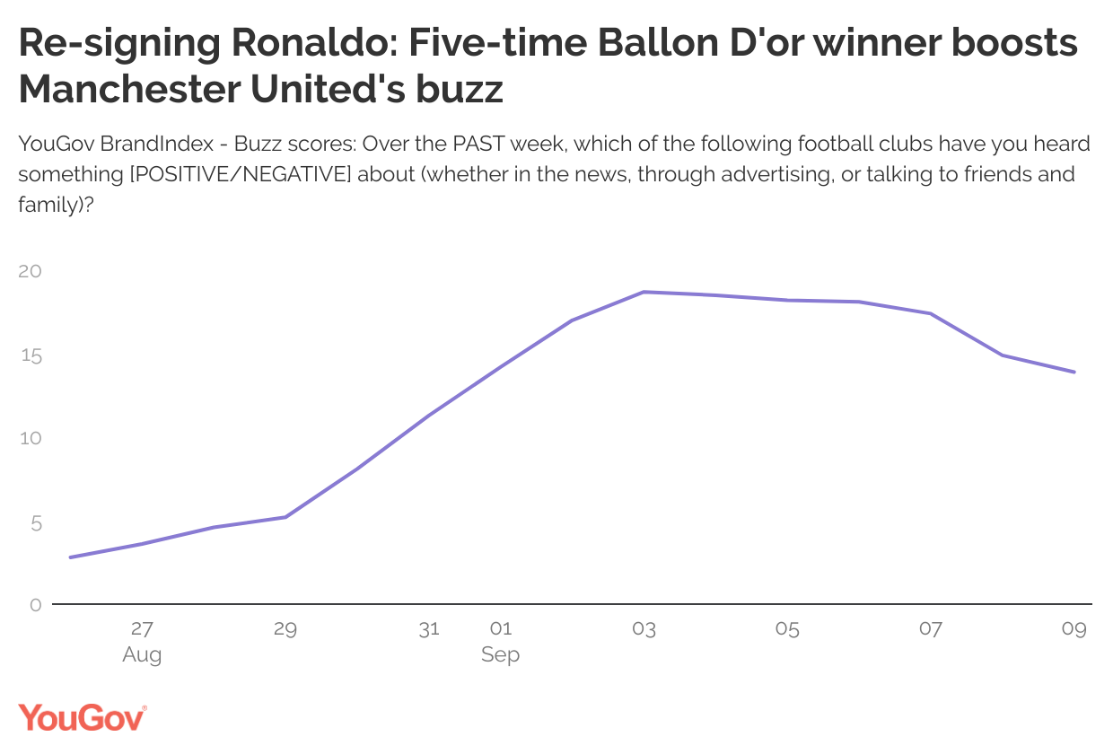 Reputation scores for the club, which measure whether or not a football club is considered “big” in the eyes of consumers, increased from 35.3 to 43.1 over the same period (+7.8). Regardless of whether his footballing powers are waning or stronger than ever, it is clear that the returning number 7 has given Manchester United greater stature as an organisation.

Ronaldo’s homecoming has even improved the club’s overall brand health. Index scores – which are calculated by taking the average of Impression, Quality, Value, Satisfaction, Recommend and Reputation scores – for United rose from 13.3 to a peak of 17.9 on September 2, before falling back slightly to 15.1 by September 9.

There is evidence to suggest re-signing the talismanic forward has had a positive effect on perceptions of the club’s overall fandom: our metric which tracks attitudes towards a team’s supporter culture, rose from -1.4 to a peak of 8.6 (September 2) before declining to 0.5 by September 9.

Ronaldo’s return has been celebrated by United fans (especially following the brace he scored on his second debut) and judging from our data, there is clearly a lot to celebrate at the boardroom level as well. That said, skilful a player as he may be, a 36-year-old footballer on £475,000 a week – and one who is the subject of very serious allegations –  could well present a commercial and reputational risk once the early wave of applause fades.