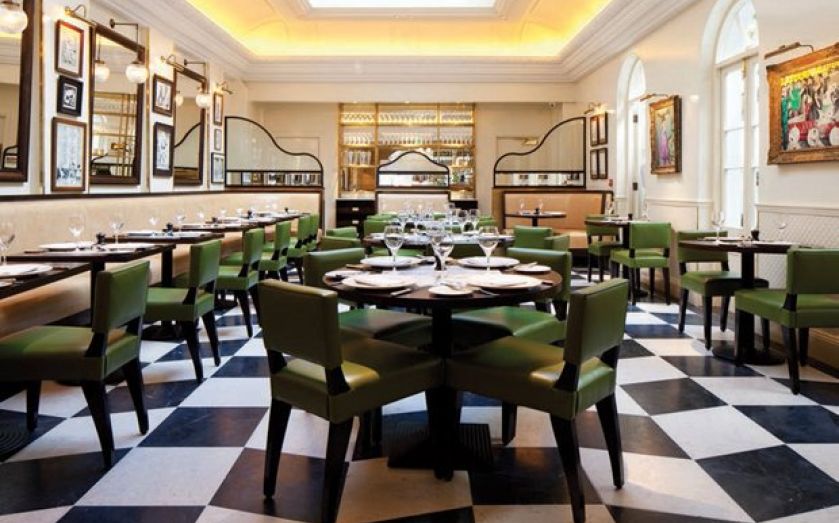 RESTAURANT 5 St James’s Street, SW1A 1EF Tel: 020 7930 2030 FOOD Three Stars VALUE Three Stars ATMOSPHERE One Star Cost for two with drinks: £140An occupational hazard of being a restaurant critic is that people often ask you where they should go for dinner, or for recommendations of who does the best ostrich haggis/springbok knee/pig-gut ice cream.I tend to leave them both disappointed and curious as to how I landed a job telling people where they should and shouldn’t eat. It’s the pressure; I buckle under the weight of expectation. It’s my chance to shine and I bottle it. It’s not an easy business, recommending a restaurant – it needs to be impressive but not showy, idiosyncratic without being ostentatious. As I’m working through the possibilities, the moment gets bored and wanders off, looking awkward. In these situations I tend to rely on El Pye, who is the social equivalent of a hand grenade; toss her into a room and she’ll talk everyone to death, leaving them conversationally exhausted and diverting the topic away from restaurants.With this in mind, I did a mental re-cap of places I’ve reviewed over the last few months that I’d go back to. They include, in no particular order, Chabrot Bistrot des Halles, which I’d revisit if El Pye dumped me and I wanted to impress a date without spending too much. There’s Baiwei, because everyone else who’s eaten there fawns over it for reasons I can’t fathom, and also because it’s at least bad in an interesting way. Definitely Brasserie Chavot, because it’s the best pound-for-pound restaurant I’ve eaten in all year, and I’d go back to The Five Fields if someone else was picking up the bill (see also: 1701).Judging by this list, Boulestin, a new place just down the road from Green Park station, should be right up my street. It’s in the same ballpark as Chavot and Bistrot des Halles, in that it’s very, very French, serves well prepared, unfaffy food and has no time for informal dining (shirking the trend for informal dining, by the way, is the latest trend). It works like this: you call up and tell them when you want to eat there. They book you in. You arrive, sit at a table and a waiter takes your order. He brings you your food and you eat it. It’s very postmodern, forgoing the months-old tradition of bringing your food in 12 installments, as and when the chef-come-butcher has got around to slaughtering it.This end of London on a weeknight is a bit like the part in a disaster movie where the camera pans across deserted streets moments before a mob of zombies/aliens turns up, albeit with fewer burnt out cars. Boulestin is nestled down the Pall Mall end of St James’s Street and is easily recognisable by virtue of being the only place that’s open. It’s exactly what you’d expect a place near Green Park to look like. It has black and white tiled floors, pastel furnishings and an atrium that probably looks nice during the day but is somewhat ominous at night.The menu darts irritatingly in and out of French, as if whoever had written it couldn’t decide which language to go for and settled on a bit of both. I went for scallops with tomatoes and capers to start, which were nice enough – a little too salty – and sweet-cured Scottish herrings, which were delicious: subtle and oily, served with some no-nonsense potatoes. The oeuf en gelée (eggs in jelly) – one of the menu’s more interesting inclusions – was excellent; fatty and yolky with just the faintest hint of tartness.My baby chicken main was solid: well cooked with no messing around. Decent meat, simple sauce (tomatoes and capers; chef likes tomatoes and capers). El Pye’s dover sole was more of the same; a nice big, well seasoned fish. No fancy stuff.I wanted a macaroon for dessert but they didn’t have it, suggesting the Sauternes custard (a bit like an upmarket crème caramel but not as sweet). It comes with prunes soaked in so much Armagnac you could use them as makeshift Molotov cocktails, and it was the highlight of the meal.It sounds good, right? Except, somehow, it’s not. The food is decent, the service is faultless (the maitre d’ in particular, who looked like a young Clive Owen on a good day, was exceptional) and it’s not even that expensive, if you go for the pre-theatre menu, which is less than £20 for two courses.But there’s something very unlovable about it. I feel like I’ve eaten there a hundred times before, in a bad way. It has an aura of somewhere that’s been created using an algorithm, as if someone has laboriously crunched the data and worked out with clinical precision the type of place that’s going to be on-trend in six months.The food takes no risks; everything is drearily well prepared and immediately forgettable (excluding that Sauternes custard). The dining room looks like it was designed by an interior-decorating android that’s been programmed with the words “French” and “posh”.In short, there are loads of places serving food at least as good that won’t leave you with the nagging feeling that you’ve left behind a small but important part of your soul.I’ll add it to the list of places I fail to recommend when someone asks me where they should go for dinner.