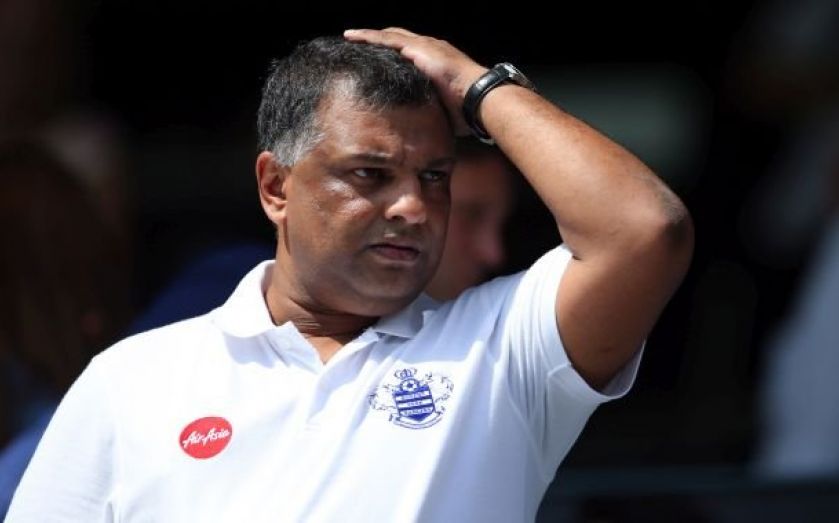 Queens Park Rangers (QPR) could be thrown straight into the Football Conference should they refuse to pay a financial fair play (FFP) fine and face relegation from the Premier League this season.
QPR are expected to face a hefty fine for breaching the Football League’s FFP restrictions during last season’s Championship campaign.
Championship clubs must operate under a total minimum loss of £8m, however after recording a pre-tax loss of £65.4m in the season before last and spending £10m in order to achieve promotion back into the Premier League, QPR are unlikely to meet the regulation.
They could be fined up to £40m as a result, something QPR chairman Tony Fernandes has previously vowed to resist.
Football League chief executive Shaun Harvey described consigning QPR to the Conference as a “nuclear option”, but admitted it was a possibility at the Soccerex conference in Manchester today.
Harvey said:

Theoretically that is the position, but I would hope there would be resolution long before that option even had to be considered.
We are satisfied we still have the ability under our regulations to charge them for a breach of our rules whilst they were in membership.

The Football League’s FFP regulations for last season enforce a minimum £3m loss, but allow for a further £5m shareholder equity investment.
If a club is promoted to the Premier League, they must still provide financial information by 1 December, upon which any breach can incur a fine based on the level of deviation.
However, Tony Fernandes has previously stated that he will fight any fine imposed by the Football League, describing them as “unfair”, stating that “the wage difference between the Premier League and the Championship is impossible”.
QPR's pre-tax loss last season contributed to total debts of £177m, and followed two successive seasons of pre-tax losses over £20m. The club haven’t recorded a pre-tax profit for over a decade.
Chief executive officer of Championship club Charlton Athletic, Katrien Meire, insisted the Premier League and Football League must take a tough stance against breaches of its FFP policy, but warned against excluding the club altogether.
She said:

It's going to be a legal battle, which nobody is looking for. The Premier League together with the Football League should enforce this.
Everything at UEFA level was enforced, so if this will fail in the English competition then why would the other Championship clubs comply?
You can ban them but that might be worse from a legal perspective. I think they should deduct money from the parachute payments.

QPR are planning to build a new 40,000 seater stadium in West London in a project that will create 50,000 jobs and add £6.2bn to London’s economy according to calculations from the Mayor’s office.
Yet if QPR do eventually detonate the Football League’s “nuclear option”, it would surely lay waste to such plans. Last season the average attendance in the Blue Square Premier was 1,866.