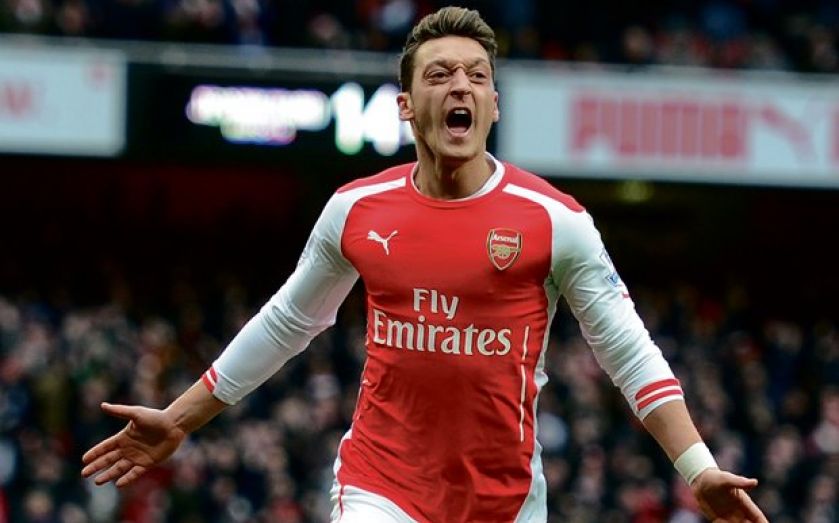 Strikes from Olivier Giroud, Mesut Ozil, Theo Walcott, a Santi Cazorla penalty and Hector Bellerin gave Arsenal victory, while Villa have not registered a goal for six league games and their tally of 11 this term is by far the lowest in England’s top four divisions.

Wenger had dismissed Arsenal’s chances of mounting a title assault following defeat to Swansea in November but a third successive Premier League win and clean sheet has buoyed the Frenchman, whose side move fifth in the league table, level on points with Southampton.

“It’s too early to say [that Arsenal can still have a say],” said Wenger, who was without injured top scorer Alexis Sanchez. “We are 11 points behind, that means they [Chelsea] need to lose four games and we need to win four. I believe we should try to be consistent and see what happens.

“I would say we are hitting form at the right time. That shows as well that we have maybe found a better consistency. That’ll be very important until the end of the season.

“Let’s show that we can win more and it shows you as well that when the confidence level is higher and when everybody’s back defensively, it makes a difference. Defensive stability is vital, when you don’t have that, you suffer.”

Arsenal surged into an eighth minute lead when Giroud latched onto Ozil’s exquisite flick and maintained his composure after a poor touch to dink the ball over advancing Villa keeper Brad Guzan – his fifth goal in six Premier League outings.

Spain midfielder Cazorla has been in sparkling form and was inches away from doubling the Gunners’ lead, only for his low effort from the edge of the penalty area to thump against the upright.

Arsenal could breathe easier 11 minutes after the re-start when Ozil burst onto Giroud’s weighted pass and found the bottom corner, across Guzan, with a slightly scuffed finish.

Villa were carved open again shortly after the hour mark, Walcott leading the counter-attack and linking with Cazorla before the England winger, making his first Premier League start in 13 months, curled the 50th league goal of his career beyond Guzan.

Giroud clipped the top of the crossbar with a glancing header before Cazorla’s rifled penalty squeezed past Guzan, with the spot-kick awarded for the American keeper’s foul on substitute Chuba Akpom. Teenage full-back Bellerin completed the scoring in injury time by slotting home from outside the box, before Colombia stopper David Ospina clawed away a fierce drive from Ashley Westwood.