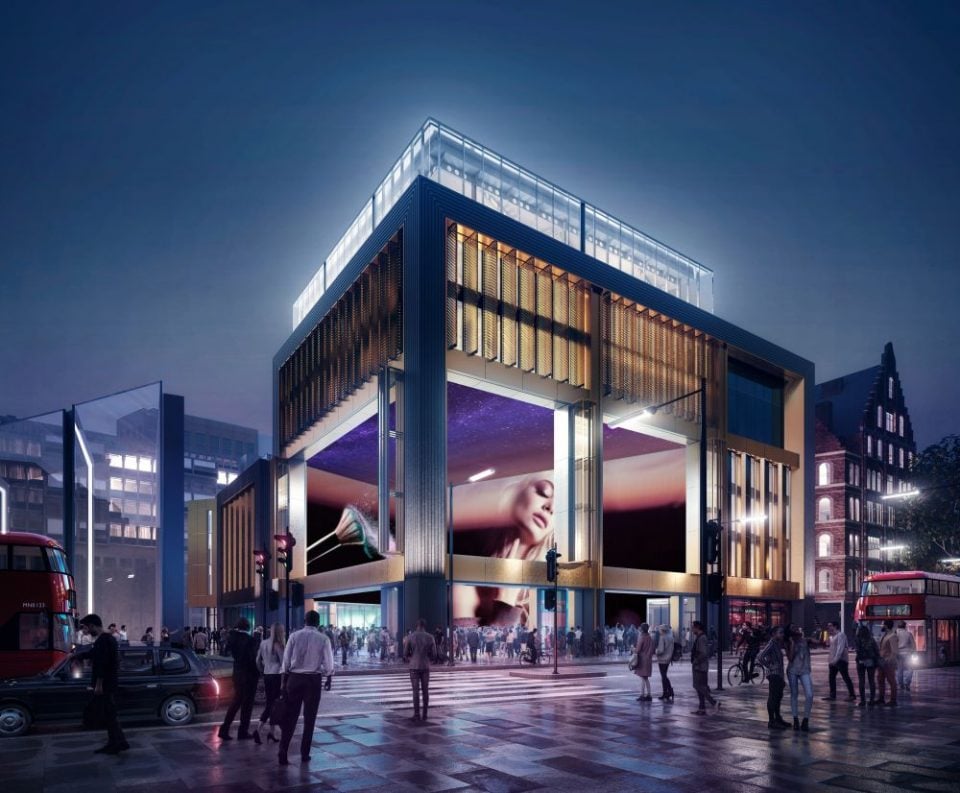 Trying to find a definition for Outernet can sometimes feel like explaining Tiktok to a grandparent.

Once completed, the 34,000 square feet (sq ft) site — sat squarely on the corner of Oxford Street and Charing Cross Road — will boast the world’s largest deployment of LED screens, as well as shops, restaurants, offices, a hotel and a 2,000-capacity underground music venue. Philip O’Ferrall, Outernet’s chief executive, admits he also struggled to sum up the concept, but says has now settled on “entertainment complex”.

The eclectic project is undoubtedly glitzy, but for O’Ferrall it is also deeply rooted in heritage. The site is flanked by Denmark Street, otherwise known as Tin Pan Alley, a former hangout hotbed for some of the world’s biggest music stars, including the Rolling Stones, David Bowie and Jimi Hendrix.

Rather than flatten this history under a bulldozer of gentrification, O’Ferrall insists his firm will make it the project’s cornerstone. “It’s born out of the heritage in the area and then building on all the great things that this part of the city needs, which is entertainment, retail, regeneration,” he says.

Not everyone is convinced, and the project met some initial opposition from campaigners who warned Denmark Street’s bohemian character would be destroyed. However, Outernet has sought to retain the spirit of the area by stipulating that only music-related shops can occupy Tin Pan Alley. It has also preserved the iconic 12 Bar – where the likes of Adele and Keane played their first UK gigs – by lifting the entire building out of the site before replacing it above the newly-excavated underground levels.

The scale of the Outernet project is vast, and follows more than a decade of planning (new Crossrail tracks running under the venue had to be specially engineered to prevent vibrations). The land is owned by Consolidated Developments, which previously turned a car park into the Soho Hotel, while private equity firm Blackstone is stumping up the £350m costs.

Rather than launching a traditional land grab, however, Outernet is pinning its hopes on a new kind of offering — one that combines broadcast media with live entertainment. Towering over the site is a cube lined with 23,000 sq ft of LED screens, which will beam adverts and branded content to the thousands of commuters, tourists and bar crawlers spilling out of Tottenham Court Road Station each day.

But O’Ferrall, a former Viacom TV executive, insists this will be no normal ad billboard. Instead, it will play host to product launches and film premieres. He says he is “horrified” by comparisons to its most obvious competitor Piccadilly Lights (which has made recent moves beyond advertising, such as screening the trailer to the upcoming James Bond film).

Outernet’s audience will vary throughout the day — from tourists passing through to daily visits by Soho’s well-heeled media professionals — and the content will target both. Publishers such as Time Out are thought to be lining up for partnerships, while luxury brands are also likely to use the space. For Outernet, this advertising will be a key source of revenue.

But for Londoners, the biggest appeal may be the subterranean music venue — the largest to open in central London since the 1940s.

The capital’s live music scene has suffered a string of closures in recent years, not least the nearby Astoria, which was shuttered in 2009 to make way for Crossrail. The iconic 100 Club on Oxford Street was last week granted business rates relief as part of a plan to protect grassroot music venues.

Geoff Taylor, chief executive of music body BPI, welcomes Outernet’s investment in new venues: “Too many have closed in central London and other centres around the UK in recent years.”

O’Ferrall admits his project would not work if it were a live venue alone. As well as the ad screens, the venue will boast retail space (no Pret a Mangers, I’m reassured) and a new hotel. The office units, it is hoped, will play host to music professionals.

Live music events are slated for the end of this year, while the broadcast screens will be up and running in 2021. After that, Outernet has its sights set on venues in New York, Los Angeles, Dubai and Mumbai.

London, then, is the litmus test. If it fails, Outernet will stand accused of homogenising the capital’s heritage. Done right, and it could just be the future of urban entertainment.