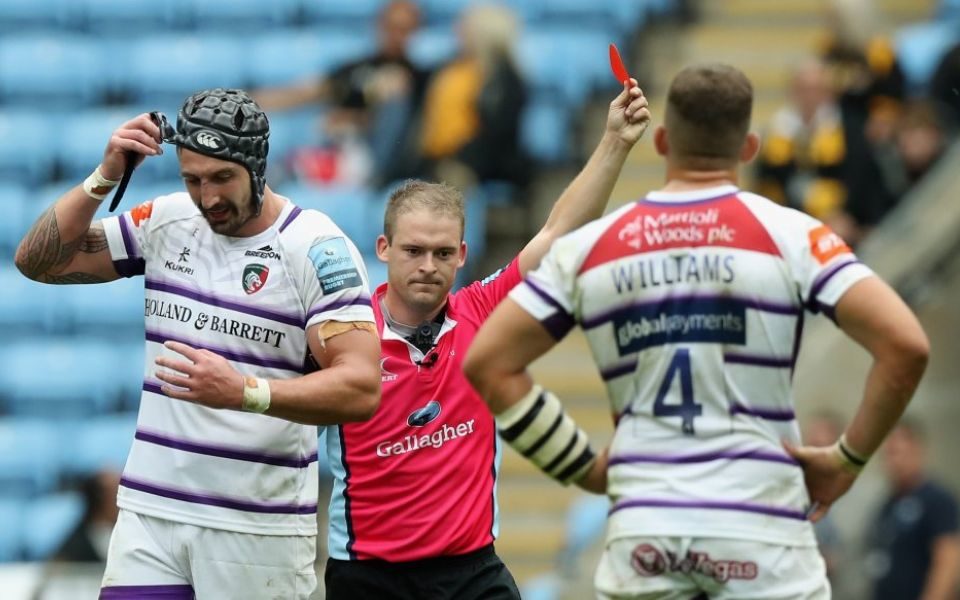 Will Spencer’s red card and subsequent four-week ban for a high tackle during Leicester’s 41-35 defeat by Wasps last weekend has sparked a perennial debate in rugby.

High tackles are a complicated subject. The focus of rugby’s administrators is to reduce concussions and they’re understandably hot on the issue at the moment.

The law change to keep tackles below the shoulders are clearly for a positive reason and in general they’ve had a positive effect: concussions are being reduced and more tries are being scored.

Read more: Joshua must clear Povetkin hurdle to get back on track

When you apply the letter of the law Spencer’s tackle on Tommy Taylor was illegal. Leicester interim head coach Geordan Murphy’s point that there was no head injury to Taylor is irrelevant.

The question is if the laws are necessary and an accurate portrayal of the game.

I think there needs to be some really careful management from referees around the issue because rugby is a sport for people of all shapes and sizes.

Taylor is significantly shorter than Spencer and was crouching into the tackle. It’s difficult to ask the tackler to conform to the rules on every occasion, while a tall player going low in the tackle can cause different dangers.

The referee Ian Tempest went by the letter of the law with a red card, but had he given a yellow no one would have complained.

Rugby is a contact sport and the objectives of the game are to dominate the opposition. If you win the physical battle you stand a good chance of victory in the match. But if defences are being prevented from being physical then it changes the nature of the competition.

The breakdown and the scrum always used to be home to the dark arts where players thrive on the rules’ vagueness. It seems the tackle might be following that theme.

Referee Ian Tempest followed the law to its letter, but the decision was viewed as harsh by many (Source: Getty)

Spencer’s four-week ban is certainly harsh. It’s a fine line, and the responsibility lies with the tackler, but he’s unfortunate because the sport moves so fast and he has missed his mark by a fraction.

The problem is I don’t think there is enough clarity on the rules. Officiating is difficult and referees are doing a good job of enforcing them, but the nature of the sport makes the contact area a grey one.

Tom Youngs’ comment that the game has changed is right, but those saying the game has gone soft are obviously not those playing it.

I don’t think rugby has changed for the worse – in fact the opposite because they are now looking more at player welfare. I’m sure the majority of players wouldn’t like a return to the old rules.

The laws have been made from a positive place, but they have to be careful not to lose too much of the essence that makes it rugby.

Tackling is a key aspect of rugby and needs to be governed clearly (Source: Getty)

The season is still young but already there have been examples of inconsistencies in officiating. Spencer was red-carded and banned for four weeks for his tackle, yet others have gone unpunished.

Therefore the danger isn’t in the rule itself, but in how it’s interpreted and put into practice. When you have a confused message that’s when players get frustrated and it can become hazardous.

Spencer’s ban has been made in an attempt to draw a clear line and remove the grey. It remains to be seen whether the message is received.