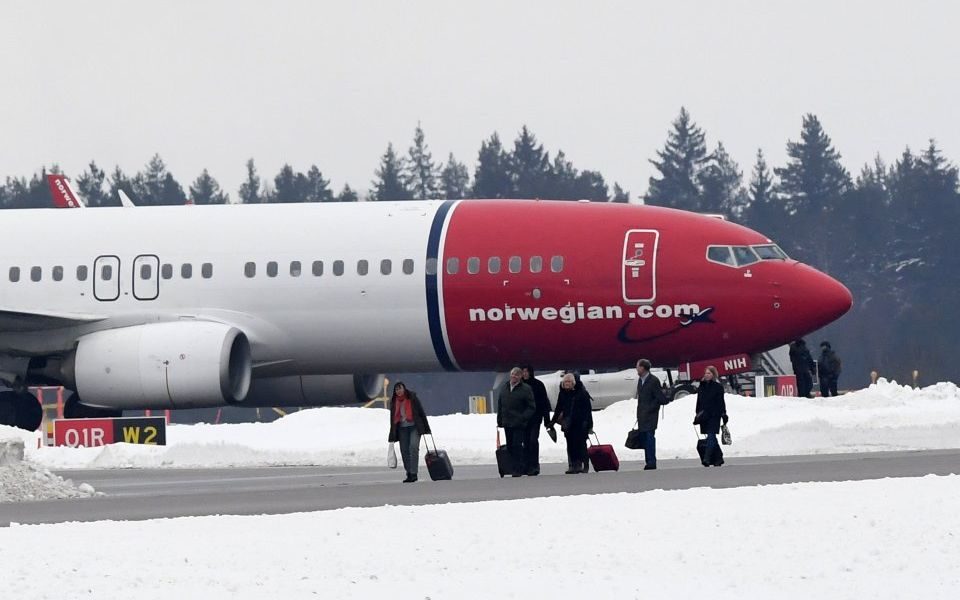 Embattled airline Norwegian Air will seek compensation from plane maker Boeing for lost revenue and extra costs arising from the Europe-wide flight ban on the US manufacturer’s latest jet.

Norwegian’s 162-strong fleet includes 18 of Boeing’s 737 Max 8 model, which aviation authorities across the globe have grounded, after it suffered its second fatal crash in five months.

The airline’s share price has already been in freefall since a high of 184 krones last spring, closing at 55 krones yesterday, following a further 2.9 per cent drop amid the latest setback.

Speculation has already been mounting that Norwegian may collapse – or be subject to a hostile takeover bid – if its value drops any further, after an emergency rights issue last month.

Norwegian cancelled 36 departures today, its website showed, most of which were due to leave airports in Oslo, Stockholm and other Nordic cities.

The firm said it would minimise the impact on passengers by booking them on to other flights and plugging the gap with other types of plane in its fleet.

In a video statement, Norwegian Air chief executive Bjorn Kjos said: "We will not take the cost related to the new aircraft that we have to park temporarily…We will send this bill to those who produce this aircraft."

"I would like to apologize to those customers who have been affected by the temporary grounding of our 737 MAX aircraft. Our customers are our main priority now," says Norwegian's CEO Bjørn Kjos. #flynorwegian pic.twitter.com/xZLmKTIa0A

The European Union Aviation Safety Agency (EASA) was joined by others in China, Singapore and Australia yesterday in putting a flight ban on the 737 Max 8 and 9 models, after an Ethiopian Airlines plane plunged to the ground on Sunday, killing all 157 people on board.

An identical model operated by Indonesia’s Lion Air also crashed in October shortly after it took off from Jakarta, killing 189 people.

There has been no information yet to link the Lion Air and Ethiopian Airlines incidents, but Boeing’s market value has fallen by billions of dollars this week, as concerns grow that both crashes were down to one – as-yet unidentified – operational defect.

But the US Federal Aviation Administration (FAA) reiterated last night that it will not suspend the Max model, despite mounting pressure to do so.

The FAA said its review “shows no systemic performance issues and provides no basis for grounding the aircraft”.

The the US flight attendants’ union, the Association of Flight Attendants, sent a letter to the FAA yesterday, saying both crew and passengers were “expressing concern”. As a result, the union said it is “formally requesting the FAA conduct an investigation into the model”.

Its president Sara Nelson, said: “The US has the safest aviation system in the world, but Americans are looking for leadership in this time of uncertainty.

“The FAA must act decisively to restore the public faith in the system.”

Meanwhile the Allied Pilots Association told its members: “It is important for you to know that if you feel it is unsafe to work the 737 Max, you will not be forced to fly it.”

Major US operators Southwest Airlines and American Airlines are continuing to use the planes.