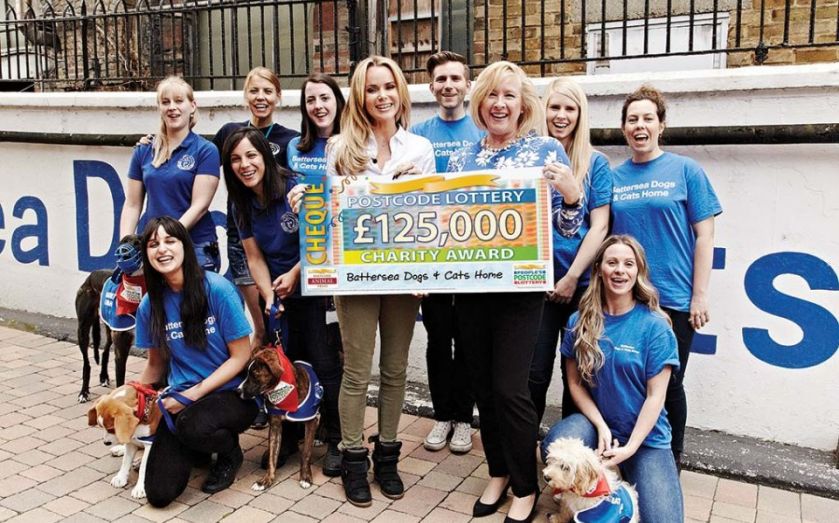 Players of People’s Postcode Lottery have raised over £56m for charity and they aim to raise even more next year.

Fancy your luck this Christmas? Well, deciding to play People’s Postcode Lottery (PPL) isn’t a gamble at all when you know that the money you pay is being used to support some of the UK’s most worthy causes.
The charity lottery, whose players have raised £56.1m for good causes, requires players to enter their postcode rather than a series of numbers to be in with a chance of winning cash prizes. But what separates PPL from other lotteries is that there is always a daily winner, no prize rolls over to another draw and its players are contributing 50p from every £2 ticket to charities and good causes across Great Britain and internationally.
PPL operates lotteries on behalf of 13 trusts raising funds for practically every worthy cause, from disadvantaged children to rescued animals, culture to sport, Africa to the environment. And it’s giving more than ever, which means more money for good causes across the country. According to a report published by PPL this autumn, every £1 given by the lottery is leveraged by charities to generate a further £1.70 in income. This means that the charities are able to use the lottery money to attract even more funding.

People’s Postcode Lottery organises five draws a month with prizes every day and each ticket costs £2, paid monthly in advance by direct debit, credit card or PayPal online at postcodelottery.co.uk or by calling 0808 1098765.

When was People’s Postcode Lottery (PPL) founded and how has it grown from its original concept?
In 1989 Novamedia launched the Dutch Postcode Lottery using the concept of playing with your postcode, and helping good causes at the same time. This was followed by two further lotteries in the Netherlands; the Friends Lottery in 1998 and BankGiro Lottery in 2002. In 2005 the Swedish Postcode Lottery was established, and after a successful pilot in Northern England in 2005, PPL was launched in 2008.
Do you have a mission statement that sums up PPL?
Our mission, along with our sister lotteries, is to organise lotteries to raise funds for charity organisations working for people and planet and to increase awareness of their work.
How many charities do the 13 trusts now support?
People’s Postcode Trust has supported over 1,350 projects and awarded more than £8.3m in funding. The remaining trusts, who receive funds directly from players of PPL, regularly support an incredible 53 charities with large and unrestricted funding awards.
50p from every £2 ticket goes to good causes, but how do you distribute the money to charities afterwards?
Funds awarded can range from £500 to over £500,000. Each Trust has a Board of Trustees which decides which charities or good causes receive funds according to the activities they support and how much they should receive.
Do you have a favourite memory from the past year that illustrates how the PPL has changed a charity’s fortunes?
In 2014 a project based in Glasgow called Play on Pedals was awarded £231,957 in funding from the Dream Fund on behalf of players of PPL. This project, the first of its kind in Britain, aims to get every four-yearold child in Glasgow on a bike. As someone from the West of Scotland, I get to see firsthand the positive impact this funding is having on the area. The opportunity for these children to get cycling from such a young age gives them independence, the opportunity to develop new skills and a fun way to maintain a healthy lifestyle.
If you’re a charity that is looking for funding, how do you get in touch with the PPL?
Charities can apply for project specific funding from £500 to £20,000 at postcodetrust.org.uk

Just some of the charities supported this Christmas

Christmas isn’t a relaxing time for everyone, especially not the 400 dogs and 250 cats waiting for new owners in Battersea Dogs & Cats Home. Many of the animals, like Gizmo the staffie (pictured), get anxious and depressed in the kennels and catteries so the charity tries to entertain them and keep them feeling as festive as the rest of us.
Players of PPL recently funded a £50,000 grant, out of a total award of £175,000, which will pay for a Battersea Stress Squad to lavish them with attention and affection. “Thanks to this generous Christmas award from players of PPL,” says Sarah Whiffen, canine welfare trainer at Battersea, “we’re able to provide bundles of new toys and treats to make sure there’s always an interesting sight, sound or smell to keep our animals occupied.
In the spirit of the season, this will mean things like jingle bells for cats, festive chew toys for dogs and – of course – lots of attention from the Squad themselves.”
To find out more about Battersea Dogs & Cats Home, call 0843 509 4444.

This Christmas, players of PPL will award £300,000 to the Royal Voluntary Service to give lonely older people company over the festive season. Research by the charity found that nearly half a million elderly people are set to spend Christmas alone this year.
The charity, established over 75 years ago, will use the funds to grow its Good Neighbours service, which offers companionship and practical help, whether it’s getting food shopping or just having a cup of tea and a conversation. Around 35,000 volunteers help over 100,000 older people nationwide, providing Meals-on-Wheels, Books-on-Wheels and post-hospital care.
Royal Voluntary Service chief executive David McCullough says, “Never underestimate the power of a friendly face popping in for a cuppa and a chat. It lifts everyone’s spirits to know someone cares, but imagine how much of a lifeline it would be if that was the only person you saw.”
To volunteer for the Royal Voluntary Service, visit royalvoluntaryservice.org.uk.

A Tanzanian-based NGO that trains rats to help in warzones has been awarded £175,000 by players of PPL. Apopo recruits “Hero-rats” to sniff out landmines in Mozambique and Angola, as well as detect tuberculosis in sub-Saharan African countries. The furry rodents are rewarded with bananas if they scratch the ground when they detect explosives, or hold their noses over human sputum samples if they smell TB is present.
So far, Apopo has cleared 11m square metres of contaminated land and found over 50,000 explosives in six countries, while rats have identified 7,000 TB patients missed by conventional lab tests. Apopo volunteers also clear leftover explosives in Cambodia and Vietnam.
Apopo’s chief executive officer Christophe Cox says, “The support from the players of PPL will directly help communities across the globe who every day suffer from the terror of landmines or who are debilitated by TB, getting them back on to their land or back to work as soon as possible.”
To find out more about Apopo, visit apopo.org.

Double gold medal-winning athlete Dame Kelly Holmes believes there’s an Olympian in everyone, and that’s why she set up a trust in her name in 2008. It helps athletes use their skills and experience to empower young disadvantaged people and it has helped around 170,000 of them to realise their potential so far.
Now the Trust will be able to help many more thanks to a £175,000 grant from the players of PPL. “My team rang me when I was on holiday to tell me that the Trust was going to receive the funding,” says Julie Whelan, chief executive officer at the Dame Kelly Holmes Trust.
“I remember jumping up and down in excitement – such fantastic news. As a team it felt so good that others believe in the work we’re doing to transform thousands of lives every year.”
To find out more about the Dame Kelly Holmes Trust, visit damekellyholmestrust.org.

As Book Aid International celebrated its 60th anniversary, players of PPL awarded the charity £175,000 from the donations made by its players. Publisher Pearson was holding an event to honour the work that publishers, volunteers, funders and donors do when PPL announced its grant.
Now the organisation, which works with libraries in Africa to support literacy and education, will be able to build Children’s Corners in five libraries in Malawi. Upon receiving the grant, Alison Hubert, director of Book Aid International, said, “Book Aid International will be even more ambitious in our work to transform library services for children in sub-Saharan African thanks to this generous support from players of PPL.
In a region where so many children live below the poverty line and literacy levels are among the lowest in the world, this work is of vital importance to empower young people to build better futures for themselves and their commuters.”
To find out more, visit bookaid.org.
For the full World Charity Index 2014 list take a look at our interactive graphic