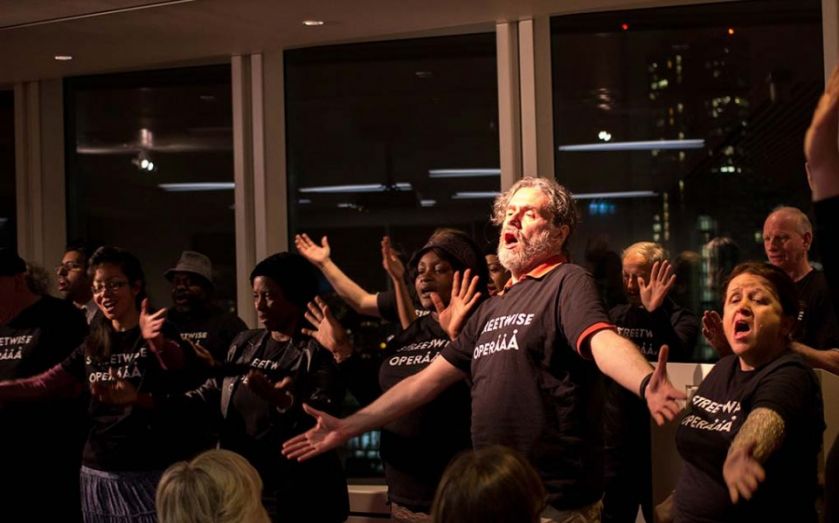 This philanthropic gameshow comes with a serious message for the thousands of people it helps.

‘Linda 100”, “Michael 200”, “Fred 500”, the shouts echo across the room as more and more people put their hands in the air. As the cries die down, the pledge leader urges them on: “Was that another hand at the back?”, “Wouldn’t you like to even out that number?”.
A women in the corner dutifully logs each amount and a bar chart on the screen moves slowly upwards indicating the amount donated.
This is crowd funding charity style. I’m in the heart of the City in the glass tower of Macquarie Bank’s European headquarters, which has provided the space for The Funding Network’s (TFN) festive funding event.
Dubbed a “Dragon’s Den” for charities, TFN events mimic the style of the TV show with four charities given six minutes each to make a pitch for how much money they need and what they intend to use it for. After each pitch the audience has six minutes to ask questions. Once all the pitches are complete, the charities leave the room and the pledging session begins one charity at a time with people shouting out their names and the amount they want to give.
This is TFN’s last session of the year in London and like most Christmas knees-up, the booze is flowing, there are plenty of canapes and the mood is jovial. But there’s a serious backdrop.
We hear about primary school children from deprived backgrounds down the road in Islington who start school barely able to communicate; South African girls more likely to be raped than finish their schooling; traumatic lives where substance abuse has become the only healer and young offenders who end up back in prison within two years of their release.
To pull at the heart strings even further, some of the charities bring human props. Nine-year old Emily tells us how the philosophy for children course provided by charity SAPERE means “you can express yourself”. And Sharon explains how a 12 week course from the Foundation for Change charity meant that at 51 she was able to move from life-long addiction to employment and “becoming a decent parent”.
Sitting here, sipping wine in the smart surroundings of the bank, it’s impossible not to feel ridiculously spoilt and wealthy in comparison.
And that is TFN’s point that you don’t have to be mega-rich in the style of Bill Gates to give, that even on a normal salary you can afford to make a difference.
For most of the people at this session this, plus the fact they know exactly what their money will be spent on, is the attraction.
Most of the donations are at least £100, but there are some £50s and TFN also holds youth events where giving starts at £10.
It may seem a very public way to show your support, but London art dealer Fred Mulder, who founded TFN, says it’s effective because its members feel responsible.
“By inviting organisations to come and present to us, by raising the questions we think are important, we also take responsibility for the outcome of our meetings, and I think this makes us more generous,” he says.
The numbers suggest he’s right. On the night the group raised £45,267, excluding giftaid, taking the total raised by the 205 auction style events since TFN’s 2002 inception to over £7m.
TFN member Sanjay Joshi, a strategy consultant in London, admits that while he came with a budget in mind, he often spends over that.
“My day job has some relevance to people’s lives but it’s not where real social change is happening, that’s here. Without this sort of structure there is no impetus to give away £100,” he says.
The evening ends with a performance from Streetwise Opera, a charity that uses music to help homeless people make positive changes in their lives, which received help from TFN in 2006. As their members force us to stand up, hold hands and join in, it’s a raucous feel good finish to an emotional evening.
“I feel powerless in so many areas of what’s going on in the world, but I come here and I know I can make a difference,” says TFN chair Michael Maynard.
For the full World Charity Index 2014 list take a look at our interactive graphic