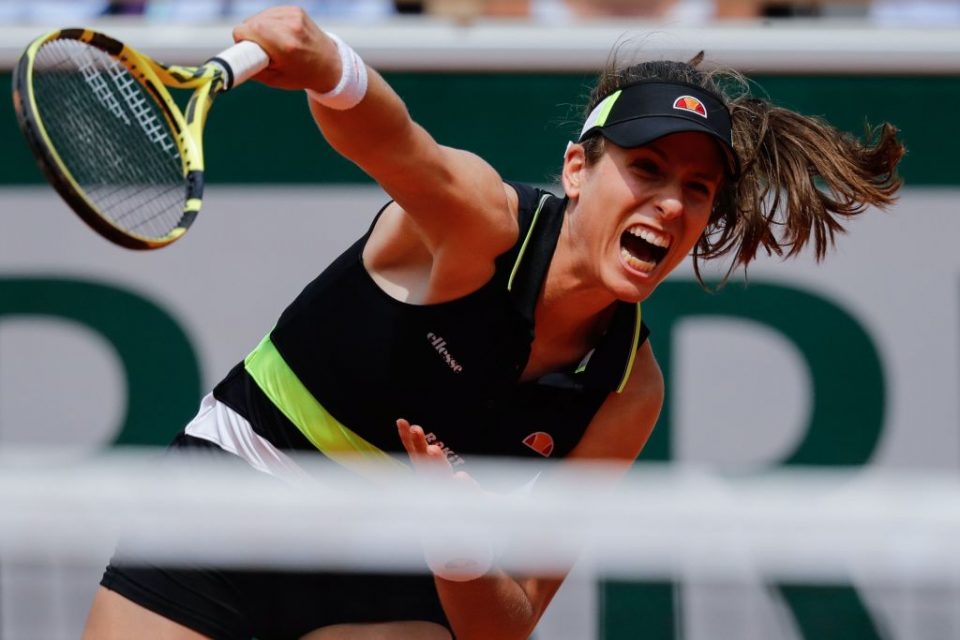 Sloane Stephens said that her two defeats to Johanna Konta earlier this year were “out of mind” ahead of their quarter-final clash at Roland Garros today.

But as Konta raced to a 6-1, 6-4 win in just one hour 11 minutes, it appeared as though they were anything but.

This is the first year that the British No1 has won a main draw match at the French Open in seven attempts, and as she made her debut on the prestigious Court Phillippe-Chatrier, she put on a performance befitting of the occasion.

It was perhaps one of Konta’s best ever displays as she gave world No7 Stephens no opportunity to grab a foothold in the match and became the first British woman to reach the semi-finals in Paris since Jo Durie in 1983.

After a tentative opening game which saw her save a break point there was no looking back as Konta held serve on every occasion, dropping just two points on serve in the entirety of the second set, both coming in the final game.

It’s a part of her game that she has worked on significantly, returning to – if not exceeding – the heights she reached two years ago when she rose to world No4.

She hit six aces throughout the match – bringing her total for the tournament to 25, more than any other player – with a top speed of 109mph, while she also won an astonishing 86 per cent of points from her first serve.

Perhaps even more significant is how often the 28-year-old’s first serve is successful, or at least how rarely she commits double faults, having made just six throughout the five matches she’s played so far in Paris.

The variation and unpredictability to her serves left Stephens frustrated and unable to combat them, while the aggression in Konta’s play to dictate the rally left the American chasing scraps all over the court.

Konta’s backhand is another facet of her game that has excelled in recent months and was once again on show as she hit more than a quarter of her 25 winners with it, usually back across the court.

She used it to create impossible angles that 2017 US Open champion Stephens could not reach, and relentlessly hit the ball deep into the corners to leave the 26-year-old demoralised and unable to hit back.

Konta’s resurgence this year is one thing, but her stark improvement on clay, a surface on which she previously held a poor record, is another.

Before 2019, the 28-year-old had only ever won eight matches at tour level on clay. This year alone she has won 16, reaching finals in both Rome and Morocco, and there is still the chance of adding two more.

It has come about since joining up with coach Dimitri Zavialoff, who previously trained Stan Wawrinka, at the end of last year, and has allowed her to flourish on the slower court.

“A lot of the work I’m doing does translate to all surfaces, but what clay requires is for you to play the game more than other surfaces, because you have more time,” she told Eurosport.

“With the things we’re doing that’s a big part of it, to give myself the space and freedom to play, to create the points the way I want to, to trust what I do. Dimitri has been really great in giving me the space to express myself.”

Zavialoff is adamant that Konta’s best surface is grass, but he may have to reassess his appraisal following yesterday’s terrific performance.

Read more: Men’s tennis at a crossroads: The ousting of ATP president Chris Kermode has left the sport in a period of flux

Nonetheless, with Wimbledon just under a month away and Konta seemingly back to her best, there is reason to be optimistic going forward, however this week unfolds.

First of all, though, there is the small matter of a semi-final against either Marketa Vondrousova or Petra Martic on Thursday – both ranked below the British No1, with many of the top seeds tumbling early in Paris.

It may be one of the best chances Konta gets at claiming a maiden grand slam title, and now she is just one match away from booking a place in the final for the first time.