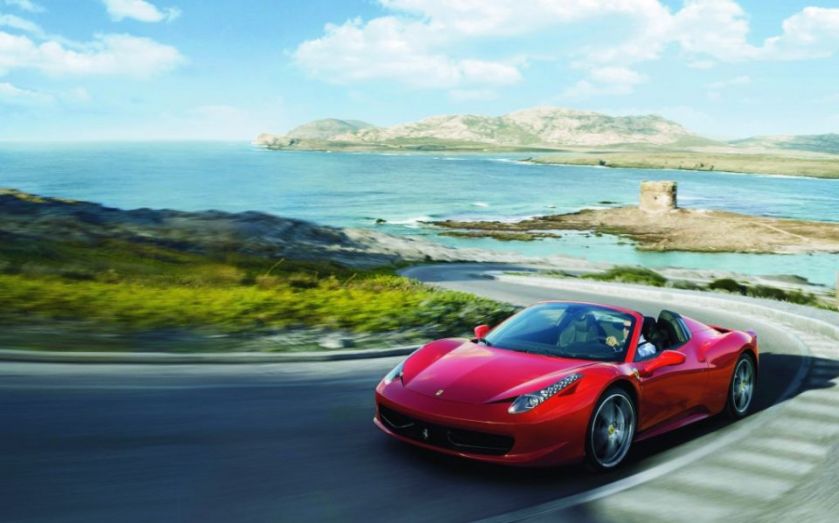 I was in Paris the other week to attend the sale of France’s most talked-about barn find; the classic car collection of Roger Baillon, who made and lost a fortune building trucks. Discovered last year in appalling condition were about 100 of the rarest and most beautiful cars of the 20th century. For four-wheel aficionados, this trove trumped the moment that archeologist Howard Carter prized open the tomb of Tutankhamen. Here were Talbot-Lagos, Bugattis and Delahayes, all rusted to the point of dust but their precarious silhouettes unmistakable.

Benefiting from being in one of the only outbuildings with walls on Baillon’s land was a slightly better preserved gem. A rough diamond that, with years of loving restoration, could sparkle once again. Hidden under stacks of curling car magazines was a dark blue 1961 Ferrari 250 GT SWB California, one of just 37 built. It’s not quite the rarest Ferrari, but it’s certainly one of the most desirable. As a childhood fan of Ferris Bueller, it’ the convertible I’ve lusted after most. And this one, it turned out, had been owned by Alain Delon, as pictures surfaced of the playboy actor sat in the car with Jane Fonda and Shirley MacLaine. This glamour results in what auctioneers like to call “the Steve McQueen effect”, although even the most optimistic would have fallen short of predicting the hammer price at Paris’ Artcurial auction on 6 February.
This dented, buckled, peeling Ferrari rust-bucket sold for €16.3m.
I therefore look upon a brand new Ferrari with a sense of expectation, not of how fast it’ll go or how glorious it will sound, but about how its value might accrue and whether one day it will be excitedly discovered under inch-thick dust and grime.
The £200,000 458 Spider is, of the current Ferrari roster, the successor to Alain Delon’s old steed (the younger California may share the evocative name and front-engined layout but is a bit – dare I say it? – suburban). The 458’s feisty lines and futuristic detailing has the vis “BAM” that the Cali had when Delon and Fonda swept onto the MGM lot to film Les Félins in ‘64.
Presented with a drop-top Ferrari for the weekend, one is very temped to make a beeline for the Riviera, its natural heartland on the continent. However, I have been given a mileage limit; perhaps it’s got something to do with those future values. In my hand are the keys to one of the most head-turning cars on the road, but I mustn’t stray too far from London. Where does one take a thoroughbred prancing horse for a weekend in the home counties? Ascot sounds apt. 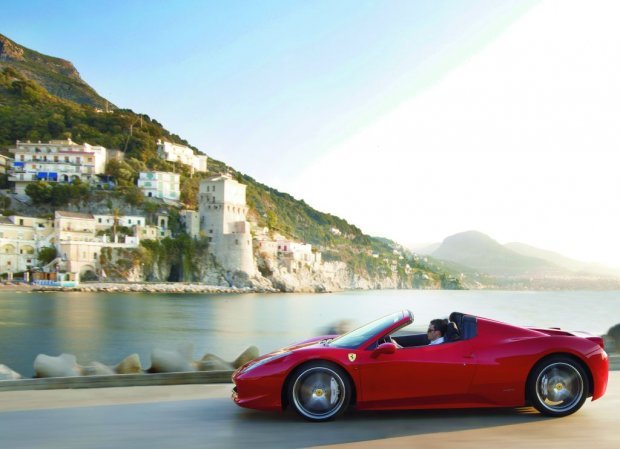 The Ferrari 458 – equally at home in Tuscany or Berkshire

My Spider is a custom shade of scarlet red which, in strong light, glistens with flecks of gold – real gold. The leather is cream and as the electric hardtop folds behind the engine compartment, a beam of sunlight crosses the dashboard and settles on the red wheel-mounted starter button. It’s like that scene in Raiders of the Lost Ark when Indiana Jones is shown the way to the treasure hoard. The exhaust crackles to life. Flick the Manettino dial to Sport and those 570 horses start pulling at the reins. Coworth Park near Ascot has two polo fields, where Princes Harry and Wills have been known to compete, and on the day the 458 and I burbled through the gates it was hosting a world championship event, with dozens of Guards Polo Club riders upon similarly expensive and powerful beasts. I parked in front of the 18th century main building between two other 458s, one white and one blue; the Italian Job indeed.
The hotel is unusual among the Dorchester Collection. Its properties include such grande dames as the Beverly Hills Hotel, the Principe di Savoia in Milan, Paris’ Plaza Athénée and Le Meurice and, of course, The Dorchester. All immaculate, but slightly stuffy. And then, incongruously in this shortlist of the world’s ritziest playgrounds, is Sunningdale Berkshire. Looking at the car park, evidently this is where England’s Ferrari owners choose to weekend. On the edge of Coworth Park’s 200 acres is John Lennon’s old home, Tittenhurst Park, where he and Yoko made the video for Imagine Lounging in the suite at Coworth listening to the White Album, it’s easy to dream of rock star hedonism.
The 458 fits into this scene of contemporary country high life just as a 250 GT would have in the 60s, and the tarmac cutting through the historic royal hunting ground of Windsor Great Park allows one the chance to stretch the Ferrari’s legs.
Open top motoring doesn’t come any more soulful, stirring or down-right frantic than at the wheel of this Spider. The flick of each gearshift is a shot of adrenalin, and through each corner you can feel the molecules between the rubber and the road fizzing but never yielding, aided by the car’s ingenious aerodynamics. The Bluetooth seems to have gone all Italian; it doesn’t like the iPhone 6, but who needs tunes when you have that philharmonic V8 a dozen inches from your ear drum.

The Dorchester Collection’s Coworth Park, where Adam spent the night during his test drive

I take dinner just beyond Coworth Park’s walls at The Belvedere Arms, a popular local with a lively terrace from which I – and everyone else – can ogle the car. It’s certainly more aggressive-looking than the Pininfarinadesigned cars of the Sixties. Its proportions make it look like it’s breaking the law at standstill, the headlights scowl like a jungle cat, the rears look like glowing cigar butts. You wouldn’t mess with it. It’s cruelly handsome; more so even than the car that’s set to replace it later this year, the 488, which is an ever-so-slightly face-lifted turbo version with a pair of air intakes cutting into its hindquarters like some kind of high-performance wine rack.
Well-rested and breakfasted, the next morning I don riding boots for the first time in years and go for a hack on one of Coworth’s stallions; fortunately a much slower, more forgiving animal than the Spider.
It used to be the case that owning a Ferrari was hard work; from Delon’s car through to the machines of the 90s, they often needed more than a kick to get going.
I’ve had several friends buy their dream car only to have it spend half the time in the workshop. After they’d seen the bills they couldn’t get rid of their Ferraris fast enough. But Ferraris today are different. They come with seven years free servicing and, at extra cost, the warranty can be extended to 12 years. It’s the only car maker with this kind of offer.
The life of owning a Ferrari should, indeed, be all fun and no headache. For the drive back to London I don a Hawaiian shirt, a nod to Magnum PI. And in the words of Tom Selleck’s character: “I know what you’re thinking… And you’re right.” This is a truly incredible car; more than an expensive trinket, it inspires, is expressive and makes people feel good. It’s that same romanticism which makes the 458’s forbears such valuable commodities.
One day this car’s scarlet paintwork may dull but those tiny flecks of real gold will always reemerge with a bit of polish.