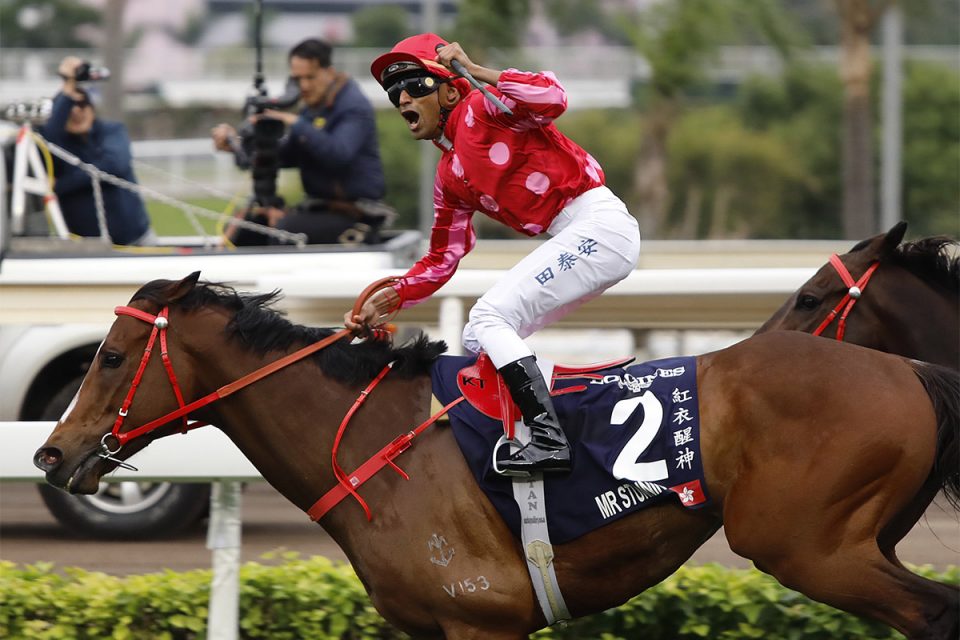 KARIS Teetan, fresh from his winning treble at Sha Tin on Sunday, can continue his run of good form at Happy Valley on Wednesday.

It’s been mentioned on numerous occasions that Teetan is a confidence jockey.

The ‘Mauritian Magician’ has ridden eight winners in the last fortnight and when he strikes a purple patch he can be followed blindly.

Take his winning ride in the Group One Chairman’s Sprint Prize on Sunday for example.

Having ridden the previous two winners on the card, he then launched a never-say-die ride on Mr Stunning lifting the seven-year-old over the line in the closing stages.

With an all-important inside draw a big factor in determining winners on the “A” Course, his best chance of success could come when he is reunited with the well-drawn and recent winner, FOCUS, in the Quarry Bay Handicap (12.45pm).

This is a tricky-looking contest on paper and is going to divide opinion.

Focus picked up a penalty after showing plenty of determination in his first try over a mile when defying a host of strong finishers, including his main rival here Happy Warrior, who finished just over a length back in third.

Happy Warrior is now five pounds better off with Focus and his chance has been further boosted with the booking of Zac Purton.

Despite drawing the inside berth, Happy Warrior has to be ridden quietly in the early stages of races to show his best form.

This is going to be tricky, especially for strong finishers, on a track where the home straight measures only just over one-and-a-half furlongs in distance.

Focus, meanwhile, is ideally drawn to be up with the early speed from the off and will kick for glory turning into the straight.

With Teetan sure to be throwing the kitchen sink at Ricky Yiu’s four-year-old in the closing stages he is capable of hanging on.

Reigning champion Purton may have better luck when he partners CINQUANTE CINQ in the Fortress Hill Handicap (3.15pm) over the extended mile.

Trainer Benno Yung’s progressive five-year-old can be excused a costly defeat last month when badly checked and impeded down the home straight, but was still only beaten by just over three lengths.

His previous form, however, is worth the closest scrutiny.

Over course and distance back in February, he dashed strongly in the closing stages to chase home Dances With Dragon.

The winner subsequently advertised that form by winning a competitive Class 2 handicap under an eight pound penalty.

With his low numbered draw an advantage, he should get a trouble-free run to outpoint his rivals.