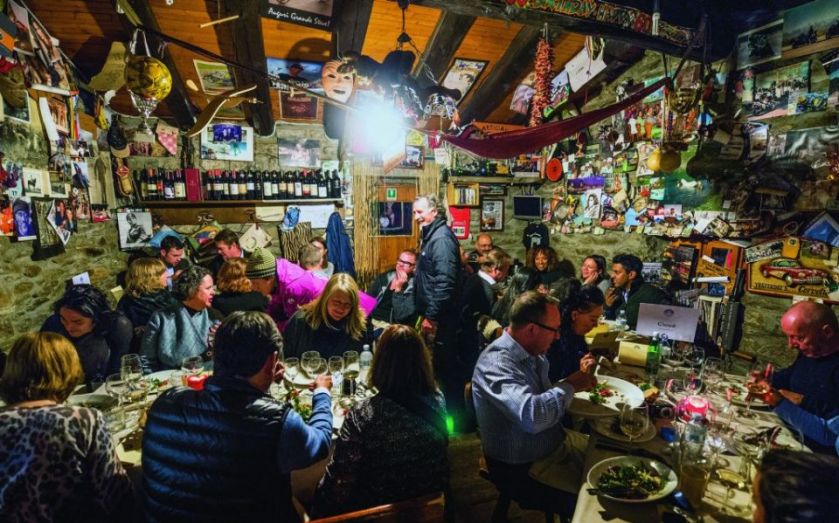 You know a Heston Blumenthal meal is going to be something special. The same, it turns out, goes for a Heston Blumenthal holiday. The concept is a foodie’s wet dream: four days of crisp slopes, fine Italian wine and haute cuisine cooked by some of the world’s top chefs. Here’s how it came about: “Heston and I were having a bowl of pasta and an amazing bottle of wine in Courmayeur, my favourite resort,” says ski impresario Amin Momen. “The sun was shining onto the mountain, and we wanted to share this beautiful experience. Heston said I should do a food event, so on the back of a napkin we jotted down some ideas. I ran out of space and filled in the rest on the local ski map. As a memento we both signed and dated that napkin. I still have it.”

Marcus Wareing (also a keen skier) and Bains were soon roped in, and Mountain Gourmet Ski Experience was born. The first event took place in early 2014, the second happened last month and the third is slated for next January. If you think the experience is so-called because it takes place on the side of a mountain, you’re wrong. It’s because you eat mountains and mountains and mountains of food. By the end of the trip I had partaken in Christmas levels of gluttony for four days straight, drunk several Tuscan vineyards worth of wine, and burned a negligible number of calories skiing. With all the drinking and falling over, what had originally meant to be a dry month was turning out to be very wet indeed. 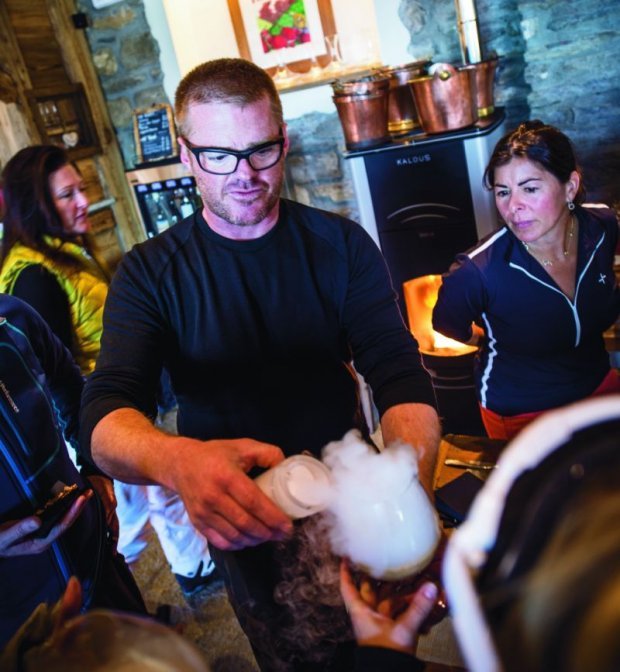 And it’s not just the punters getting stuck in: the chefs are free to indulge as well. You don’t only get Marcus Wareing, Sat Bains and Heston Blumenthal as chefs for the weekend, you also get them as mates, which is weird at first because they’re being paid, but feels perfectly natural after a dozen or so glasses of chianti.
It’s the sort of red letter weekend worth travelling half way around the world for. Several Australians did just that, adding some Antipodean raucousness to the party of 50 or so guests, each of whom had paid upwards of £3,500 for a foodie trip they’ll never forget. Also present was the head of a chemicals business and his child therapist wife, several property developers, a pair of soon-to-be-married doctors and thuggish footballer-turned-thinking-man’s pundit Danny Mills (Mills loves his food and was runner up on Celebrity Masterchef).
Heston was one of the best skiers on the trip. He’s skied everywhere, from the Alps to North America, even entering a few competitions. For him it’s the ultimate leisure pursuit: “When you’re skiing, you’re thinking about nothing else”. Heston is one of those people for whom relaxing is stressful; he needs some kind of activity that he can master, compete in and get nerdy about. In recent years he’s become obsessive about ping pong and insisted the hotel we were staying at install tables for the duration of the trip.
He knows his resorts, and Courmayeur (situated on the Italian side of Mont Blanc, 10 miles by tunnel from the larger and more prosperous Chamonix) is his favourite. “It’s a beautiful town. It’s very warm and there’s a sense of community, and then there’s the amazing restaurants on the mountain. Places like St Moritz have got loads of Michelin-starred restaurants, which is great, but you don’t really want to eat that on a mountain. Zermatt has great restaurants but the wine prices are double. Here in Courmayeur, the restaurants capture the spirit of the place, and you can drink great wine at a reasonable price.”

The only thing Heston likes doing more than skiing and making savoury ice cream is talking about how much he loves Courmayeur. “My message to English skiers is this,” he proclaimed, “drive past Chamonix. Go through the tunnel. That’s the rabbit hole into wonderland.” He publicly castigated the town mayor for the large sign that greets visitors with the phrase “Welcome to Courmayeur. The sunny side”. Heston thinks Courmayeur should show off its unique qualities – i.e. food – instead of marketing itself in relation to its marginally less sunny neighbour.
He suggests a new tagline: “Welcome to Gourmetyeur”. Later that evening, after several more glasses of wine, I told him that this is one of those puns that doesn’t really work written down, that “Welcome to Gourmet-yeur” would be a confusing road sign. But it was three in the morning and I think he was beyond caring.
Anyway, the point is the food in Courmayeur is good. Each day, after a morning skiing down picturesque pistes, we stopped at one of the town’s best restaurants, where we sampled the local cuisine. Lardo with honey chestnuts, roast suckling pig, fontina mountain cheese – the chefs all agreed they would happily include these alpine delicacies in their Michelin-rated restaurants.
Great as the local food is, the headline events at Mountain Gourmet are the evening meals in which Sat, Marcus and a select handful of their trusted chefs take over one of the local restaurants for an evening meal showcasing some of the star dishes from their UK restaurants. On the second night Sat and Marcus devised a six course menu, taking it in turns to present a signature dish. Wareing excelled with his Mackerel, duck egg and parsley starter, while Sat’s mutton and shallot – golden, blistered onions roasted whole until sweet and charred, bobbing in a rich mutton ragout reinforced by umami-laden seaweed – is hands down the most delicious thing I have ever eaten.

But it was on the final night they really pulled out the stops. Eschewing the frills and finery of the nouveau dishes from their UK restaurants, they made Heston the happiest man on the mountain by channeling the spirit of the Alps in a meal that included cauliflower cheese and roast pork belly, potatoes roasted whole with truffle and chestnuts. It was rustic, hearty cooking; exactly the kind of thing you want after a day skiing. By this time, it was all getting a bit much for Heston. “I actually want to cry. Seriously, it makes me so emotional; these are Michelinstarred chefs, but they’re cooking the kinds of things they would make for their families.”
The evening finished with everyone drinking the bar dry and dancing on the tables (I wish I could say Marcus’ dancing was as well balanced as his quail and beetroot. No one is perfect, I guess). The trip was three nights, Friday morning to Monday evening, four days in which we’d consumed slap up breakfasts followed by four course lunches and five or six course dinners. I tried to pace myself, but it’s hard to keep a handle on the quantity of food you’re eating when the quality is so high. With Sat and Marcus in the kitchen, my tastebuds were saying yes long after my belly was writing the word NO in acid on the inside of my oesophagus.
But we couldn’t leave without Heston cooking us something. After the final ski session we congregated at a mountain restaurant for what our itinerary mysteriously listed as “hot chocolate that tastes a bit like brown bread.” This unpromising drink was a richly sweet and salty liquid conceived in a moment of theatre involving lots of different things being squeezed out of bottles and wispy clouds of dry ice.
It was a suitably indulgent end to the Mountain Gourmet experience. They say skiing holidays are healthy because you burn off the food and alcohol on the slopes, but I’d have to ski continuously for about 300 years to burn off the calories I consumed. Still, who cares about calories when you’re in Wonderland?
Alex Dymoke was a guest of Momentum Ski and Swissair. Prices for the next Mountain Gourmet Experience (January 8- 11 2016) start at £3,500 per person. For more information, call Momentum Ski on 020 7371 9111 or visit momentumski.com.