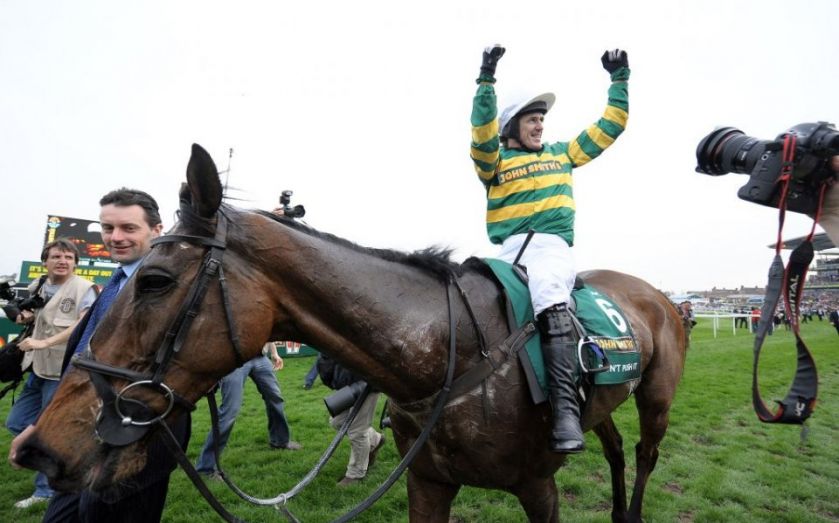 No one would begrudge AP McCoy victory in his 20th, and final, Grand National on Saturday – no one except the bookies, that is

They could face a £50m payout if the popular jockey and race favourite triumphs at Aintree this Saturday.

“The betting clouds are building,” said William Hill spokesman Jon Ivan-Duke. “We won’t be running for cover and we’ll try and ride out the inevitable onslaught.”
Around one in five bets on the Grand National are estimated to be placed on the Northern Irishman – around £30m of the £150m total bets expected to be placed on the steeplechase.
Making matters worse for the bookies is the potential double-whammy of a McCoy and Rory McIlroy win, with the popular golfer and McCoy's fellow countryman favourite to win at this weekend’s Masters.
Simon Clare of bookmakers Coral warned: “If McCoy wins, and add that to Rory winning the Masters, at odds of 6/1, we could be nursing headaches for months.”
The FTSE’s biggest bookmakers such as Ladbrokes, William Hill and Coral could all see their share price slide in the case of such a nightmare payout.
So just how good are McCoy’s chances of securing a second Grand National win of his career? The legendary jockey will steer race favourite Shutthefrontdoor whose enticing odds of 7/1 have lured in the punters.
At eight years old, Shutthefrontdoor is near the optimum age for a Grand National winner. Since 1839, 45 of the 167 Grand National winners – just under 30 per cent – have been aged nine years old , making it the most common age for a victorious horse. Even more encouraging for punters is the fact that exactly 50 per cent of all winning horses have been aged from seven to nine.
Exactly 40 per cent of winners have been aged either eight or nine.

With 7/1 odds Shutthefrontdoor heads into the race as one of the shortest market leaders since 2009 when McCoy again raced the favourite, Butler's Cabin, and finished seventh. With victory at last year's Irish Grand National, Shutthefrontdoor has the pedigree to succeed this weekend.
But how often does the favourite actually win the race?
Fretting bookies can comfort themselves in the knowledge that a victory for the favourite remains a surprisingly rare occurrence. In fact, only once this century has an out-and-out favourite won the race. Only 16.2 per cent of all 167 Grand National winners have been either favourites or joint-favourites headed into the race.
In recent years even outsiders with odds as long as 66/1 (Auroras Encore, 2013) and 100/1 (Mon Mome, 2009) have finished ahead of the chasing pack.