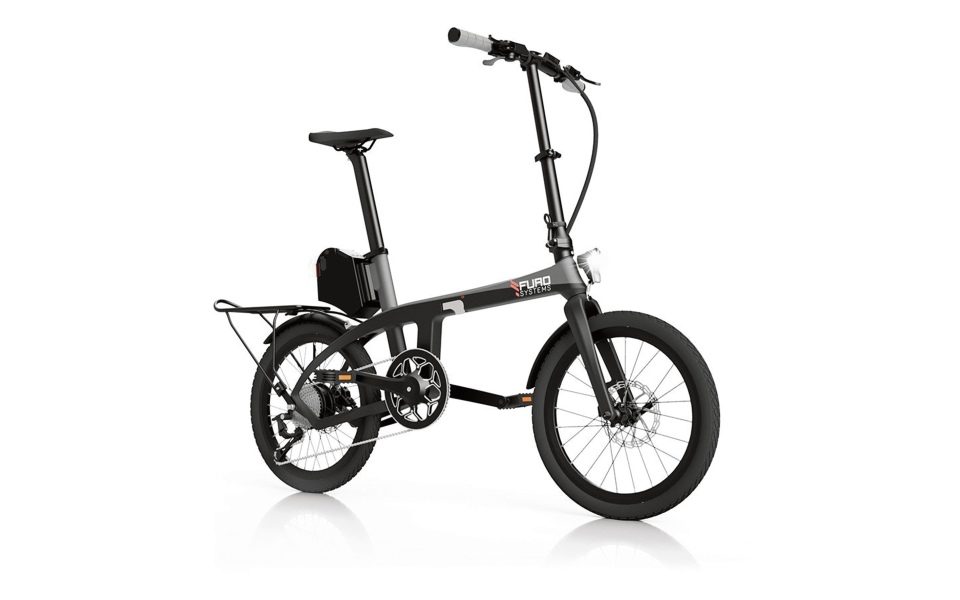 It took a short while for them to find one another, but now that they’re together, electric bikes and folding bikes are a match made in heaven.

Either one is essential for those of us intending to commute partly by public transport and partly by bike, and without arriving at the office a sweating, stinking, gasping monster. But when merged into one beautiful whole, electric folding bikes just might be the most practical way of navigating modern cities. Babies should be assigned one at birth.

The Furo X, from FuroSystems, is a carbon fibre folding bike with a powerful (though discreet) BAFANG motor mounted in the hub of the rear wheel. As soon as you begin pedalling, the electric motor kicks into action and assists you up to around 15mph. On flats, riding an electric bike is like cycling with a strong tailwind. But uphill these bikes are game-changers, turning inclines that would normally have your heart working overtime into effortless, gliding terrain.

The Furo X folds in half along its crossbar, turning in on itself like a book. The stem of the handlebar collapses and the seat post retracts into a package that’s not as compact as some other folders, but small enough to let you take it on tube carriages and store it in theatre cloakrooms. Or, let’s be honest, under the table at the pub. It’s straightforward to fold up, and can be easily wheeled along while folded by using the saddle as a handle.

Read more: The Volt Pulse ebike is the battery-assisted hybrid city bike you’ve been waiting for

There are five levels of pedal assist to choose from depending on how lazy you’re feeling, accessible from a backlit LCD display mounted on the handlebar. At lower levels the assistance is subtle, relieving you of some effort when pulling away from traffic lights. At max power the motor is like an excited labrador, desperate to blast down the road at the merest hint of you pushing down on a pedal.

The 315Wh lithium ion battery has a stated range of around 30 miles, which it matched in my test rides, dropping to around 20 miles if you only ever blast around with maximum assist switch on.

A manual, nine-speed Shimano gear system further takes the edge off hill climbs and prevents the bike turning into a dead weight on those occasions you forget to recharge and the battery goes flat. Shimano hydraulic disc brakes round off what is a thoughtfully engineered and well-designed electric folding bike. The Furo X is a joy to ride.