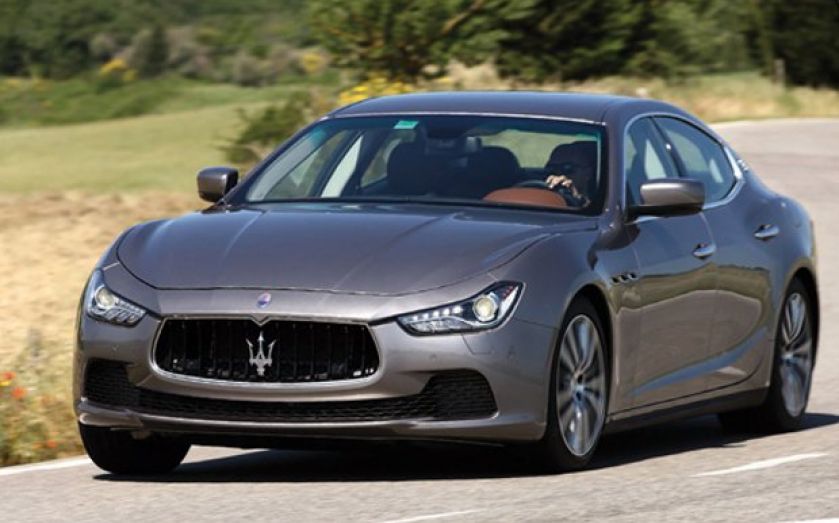 REVIEWING cars can be a glamorous business, what with all the exotic launch locations, fast motors and gorgeous engineering personnel (OK, maybe not that last one). Sometimes, though, you find yourself freezing cold while being rained on in Surrey. But at least there’s a brand new Maserati Ghibli on the test track, so it could be pouring locusts for all I care.

Maserati. Even the word sounds sexy, doesn’t it? A fabulously evocative Italian name, regardless of whether you know exactly what it means. Which, in 2014, is actually 100 years of automotive history. Nowadays the marque is part of Fiat, and Ferrari does most of its engine work – forgive me if I’m teaching you to suck eggs here.

Fiat wants Maserati to expand, and to do that it needs to go more mainstream – so the Ghibli is a taut, curvaceous, executive saloon looking to make a serious bid for BMW 5 Series territory. And by serious, I mean the firm has fitted a diesel engine.

Right now there will be people throwing towels in the air and saying bad things about board members’ mothers. A diesel engine in a Maserati? Blasphemy.

But wait. Maserati’s adoption of the 3.0-litre turbo was overseen by a man who used to look after Ferrari’s Formula 1 engines. It produces 275 horsepower, and with the standard eight-speed automatic emits just 158g/km CO2, a genuinely competitive combination. Should you buy one? No. You should buy the Ghibli S with the V6 twin-turbo petrol.

Let me explain. Realistically speaking, the Ghibli isn’t a genuine rival to the 5 Series. The BMW, Audi A6 and Mercedes E-Class all comprehensively out-class it in terms of build quality and cutting edge technology, while even the Jaguar XF is likely to prove more reliable. This makes the Maserati an indulgent purchase, and for that reason you should hang the expense and go for a licentious engine.

The range-topping 410 horsepower petrol is a thrusting bundle of passionate pyrotechnics, capable of shoving what is a rather heavy car down the road with enough conviction to see off 62mph in five seconds. In fact, it’s got so much passion the power steering broke (teething trouble, I’m sure…), but up until that moment the Ghibli S was glorious.

The interior has improved over previous Maseratis, with a dramatically angular structure and some beautiful touch points – only slightly undermined by the cartoonish infotainment graphics and the need to pay extra for paddleshifters. Still, it makes a strong first impression. As does the driving experience.

Following current trends, the exterior design is coupé-ish – which usually means your backseat passengers will be struggling for headroom as well as space for their knees. The Ghibli, however, has a real hunkered-down feel about it from behind the steering wheel – wide-tracked, low-slung, very sportscar, giving it a sense of occasion with which boring old BMW simply cannot compete.

True, it does tend to crash and bang over potholes and other typical British road surface accessories – adaptive dampers are an optional extra. But there’s a darting urgency to the way it tackles a roundabout. Find the space to wring it out and your pupils are going to dilate.

There’s another reason for choosing the Maserati, though. For all its mainstream aspirations, the brand will still only manufacture 3,000 cars a year – versus 15,000 BMW 5 Series saloons alone. Arrive in a Ghibli, and people are going to notice. Even on a damp Surrey afternoon.