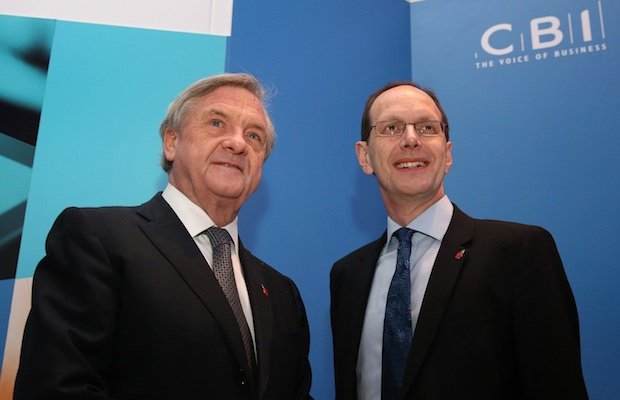 Political blame games and factually incorrect debates around immigration will be deemed unhelpful and damaging by the president of the Confederation of British Industry (CBI), Sir Mike Rake (pictured above, left), today.

At the CBI's annual conference, its president is expected to stress the importance of cooperation between the government and business to deliver growth, calling on both groups to work together.

Speaking later today, Rake will argue that the recent rhetoric that has painted business as the enemy couldn't be further from the truth, and will warn that only the private sector can deliver jobs, growth and rising living standards.

A CBI report released earlier today has already emphasised that remaining in the EU is "overwhelmingly" best for business, despite the need for urgent reforms. Free trade agreements and access to the single market outweigh regulations like the working time directive which, says the CBI, can be a frustration for businesses.

When it comes to stimulating growth, the CBI's take it that energy policy, world-class infrastructure, a highly-skilled workforce and a reinvigorated relationship with a reformed Europe are all vital ingredients, and Rake is expected to say that the coalition deserves credit for sticking to its guns and cutting corporations tax.

Playing to public opinion won't address the complex problems surrounding energy, according to the CBI. It might even have the opposite effect. "There are no easy answers here, but the public deserves better than politicians playing the blame game."

Rake will go on to say that infrastructure projects need speeding up under a coordinated plan and, when it comes to education, the skills system needs reforming. Young people are "simply not" being provided with the skills they need to fill jobs which will "keep Britain competitive".

"In the short term, where the right skills are not available at home, we need an immigration and visa system which says we’re open for business. Some of the factually incorrect, emotive debates around immigration are unhelpful and damaging."