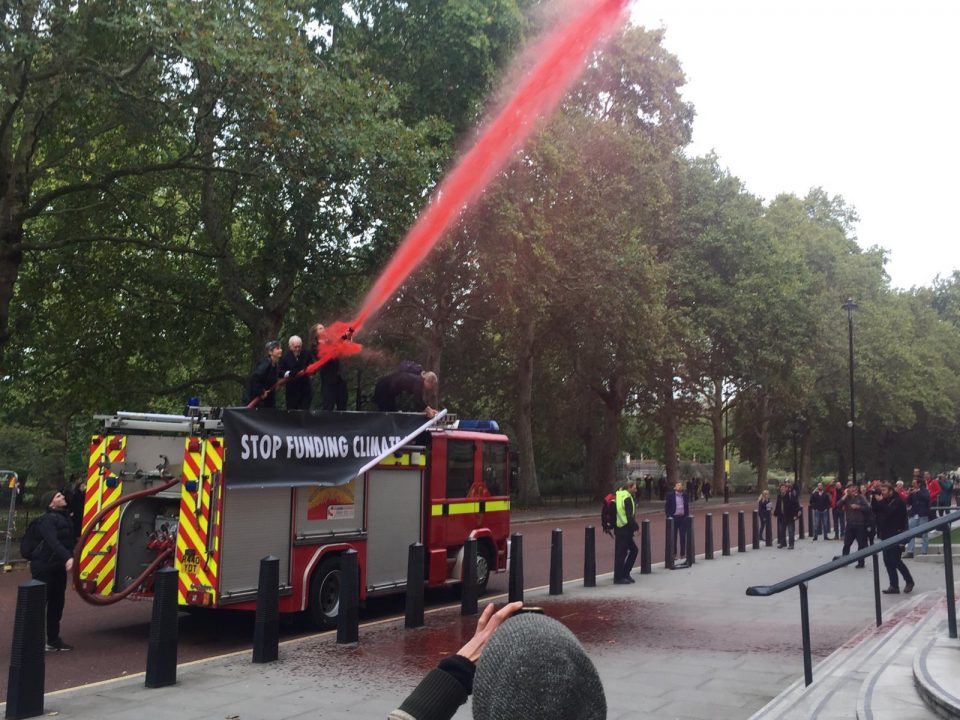 Climate change protesters this morning sprayed 1,800 litres of fake blood from a fire engine onto the Treasury.

Campaigners from Extinction Rebellion were stood on top of an old fire engine with a banner saying “stop funding climate change”.

The group is calling for “a future where our cultures are resilient, regenerative, and built on respect for one another, all other forms of life, and the planet that sustains us.”

“The UK Treasury has blood on their hands,” the group said on its Facebook page.

Live video from the scene shows a group of around ten police officers standing guard outside the site, with fake blood covering much of the ground in front of the Treasury.

Two officers are standing by the fire truck, with protesters still on top of it.

A member of the group told City A.M. said the police have been “perfectly respectful so far” and taking good care of the activists. There has been one arrest so far, they said.

The Metropolitan Police said: “Police were called at 10.17 to Horse Guards Rd #SW1. People on a privately owned fire engine had sprayed a liquid at the Treasury building. No reported injuries. 3 men and 1 woman were arrested on suspicion of criminal damage. Local road closures are in place while police deal.”

However users took to Twitter to mock the protesters as the hose burst, spraying the crowd with beetroot water, including one Guardian journalist who caught the moment on film.

On Twitter user said: “I’m all for action against climate change, but have they thought this through? The fire engine will be diesel. Others will come to clean it up. Water will be wasted. Harmful chemicals, possibly to get the red stain off buildings/steps, will flow into drains to rivers to the sea!”

Times columnist Iain Martin said: “Middle class stunt will now have to be cleaned up by working class cleaners.”

Meanwhile former defence secretary Penny Mordaunt said: “I know they didn’t mean it to end this way, but this was a dangerous stunt. Out of control hoses under pressure can do serious injury. The public should never be put at risk from such protests.

The Treasury said: “The UK is a world leader on climate change – having reduced its emissions by 42% between 1990 and 2017, while growing the economy by more than two thirds.

“In June, we became the first major economy to legislate to end our contribution to global warming by 2050. We will continue to build on this proud record.”

One of the activists is 83-year-old grandfather, Phil Kingston from Christian Climate Action. He has already been arrested six times taking action with the group.

He said: “I fight with all my being for my four grandchildren in this situation of existential danger. And I am a Christian who cares for the Earth as God’s Creation; and for the world’s poorest peoples whose experience of injustice draws a special love from God.

Another activist, Mark Ovland, is already facing a trial for his action at the DLR in April.

The group has staged a series of protests over the past year in London. In July there were protests in London, Bristol, Leeds, Cardiff and Glasgow.

The protests became famous for bringing parts of central London to a standstill, and a pink boat.

It has promised to hold protests in several locations in Westminster in October.

Mo Metcalf-Fisher of the Countryside Alliance said: “It’s incredibly concerning that a vehicle can get so close to a major government building to spray it with an unknown substance. It is almost certainly a security and health concern for staff and members of the public.”