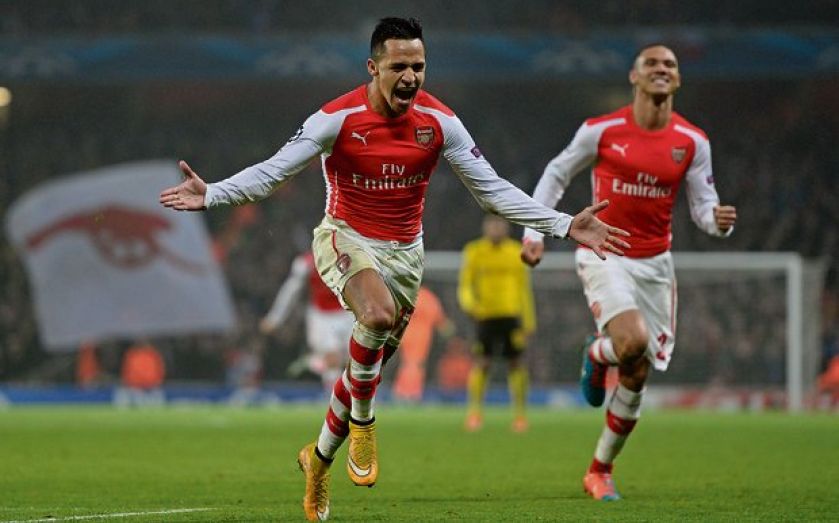 PROUD Arsene Wenger celebrated leading Arsenal into the Champions League knockout stage for the 15th consecutive season last night — but his joy was tempered by further additions to a burgeoning injury list.

Much-maligned striker Yaya Sanogo’s first goal for the club and a 13th strike of the season from Alexis Sanchez sank Borussia Dortmund, ended a three-match winless run and ensured that the Gunners will once again be in the hat for the last 16.

“I think when you work in a football club you realise that it’s not easy to have a continuity and be consistent and I’m very proud of that,” said Wenger. “I think as well the club deserves a lot of credit for that. It’s not enough because we want more than that, but we are consistent.”

A win stems criticism following a weekend defeat by Manchester United, and Wenger added: “I don’t try any more to think what people think. What is important is that we are united. This team has top quality attitude and after the disappointment of Saturday they’ve shown it again: united, committed and after that people take what they like or don’t like.”

Wenger said he had not decided whether to field a full-strength team for the final group match at Galatasaray, where another win could earn top spot – and a favourable draw – should Anderlecht manage a surprise victory at Dortmund.

A stretched squad could make his mind up for him, however, and the Frenchman revealed the calf problem that ended captain Mikel Arteta’s evening “looks serious”, while Sanogo was withdrawn with a tweaked hamstring.

Out-of-sorts Arsenal kicked off knowing a first victory in four attempts would secure their progress with a game to spare, but were without several injured first-teamers including goalkeeper Wojciech Szczesny, midfielder Jack Wilshere and striker Danny Welbeck.

Sanogo, in for Welbeck but without a goal in 17 months at the club, proved the unlikely source of the opener in the second minute, deftly juggling the ball and then playing a one-two with Santi Cazorla before prodding through goalkeeper Roman Weidenfeller’s legs.

The France Under-21 forward should have scored another moments later but hesitated when sent clear, and memories of recent squandered leads resurfaced as Dortmund began to threaten through Ciro Immobile and the crafty Henrik Mkhitaryan.

Arsenal redoubled their efforts for a second goal after the break — Alexis forcing a one-handed save and Alex Oxlade-Chamberlain hitting the bar — and the Chilean conjured it on 57 minutes when he cut in from the left and whipped a curling low shot into the far corner.