Zac Goldsmith: The green Tory gunning for Londoners’ votes in the 2016 mayoral election 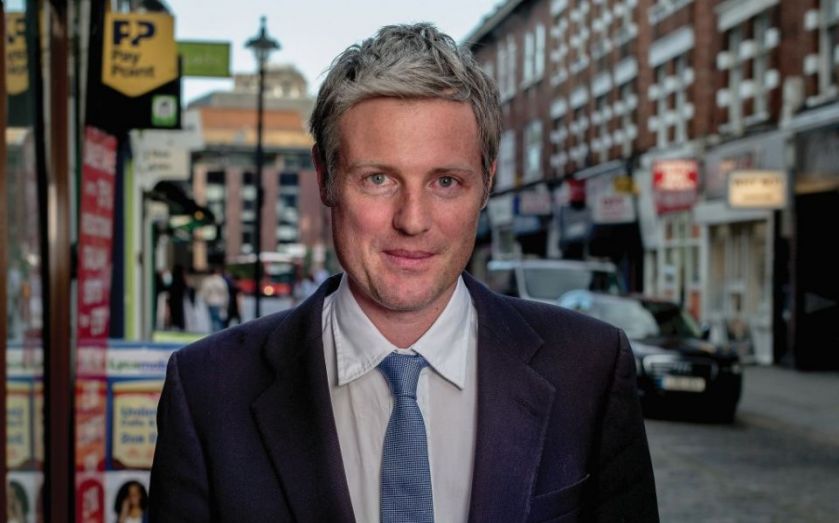 Zac Goldsmith may be a long- time environmental campaigner, but this does not conflict with his ambition to foster business in London, see the capital’s economy grow and tackle problems such as housing and infrastructure.

In an interview with City A.M., he said: “In the real world, environmentalism and growth go together; they’re married.” The Richmond Park Conservative MP, seen as the frontrunner to be the Tory mayoral candidate, wants to lower air pollution and tackle graffiti, noise and litter.

He said “if you want to tackle climate change… you tackle efficiency. There is a clear business case for efficiency.” Elected to Westminster in 2010, and boosting his majority to one of the largest in London in 2015, Goldsmith has always maintained there is no contradiction in his environmental concerns and being a Tory.

But the former editor of The Ecologist, an environmental campaigning publication, has his limits. For instance, he supports London Mayor Boris Johnson’s decision to order Newham council to veto City Airport’s application to grow the number of flights.

It upset business, but Goldsmith says Johnson was right. “Too many air quality matters were raised. Poor air is a real social issue regardless of your politics, where people are dying prematurely. And on top of that there is a real issue of the extremely loud noise pollution it would create for locals. Boris was right, I know he will defend his position and if I become mayor I will defend it too.”

Goldsmith doesn’t see this as a hard blow to business, but a misunderstanding of what business wants. The queries from business groups, he said, are statements of “we need more capacity”, and that can be achieved in other ways.

Ardently opposed to Heathrow expansion and committed to honouring a pledge to trigger a by-election if the government decides to build a third runway, Goldsmith said: “Connections between London airports could be enhanced and competition boosted. That will bring capacity gains for business but also benefits to London and consumers. City Airport doesn’t tie into that.

“But remember, in terms of business overall, London does extraordinarily well. Take construction, which accounts for a third of waste around the country. Yet in London there are construction firms that don’t send any waste to landfill. And this is the starting point: London has been very successful in growing and nurturing the business environment.”

Read more: Can the Conservatives win again in a Labour city?

He points out London has almost 860,000 businesses: “The importance of London cannot be exaggerated – The green Tory gunning for Londoners’ votes it is the UK’s principle engine. Not just in financial services, but culturally and in technology.” Yes, there are problems.

“London is not particularly well connected digitally, and we need to improve that with developments in broadband, to help to grow business more.” Mostly, the question is of how to continue success and remain business friendly. To do that, said Goldsmith, we need to “increase capacity and make London liveable”.

By current estimates, there will be around 10m people in London in the next 15 years.

It’s not hard to imagine a housing crisis where Londoners are priced out of the city, Goldsmith warns. “To develop business, we need to tackle housing and we need to develop transport”.

Yet, he said this doesn’t clash with his commitment to protecting green spaces in London and respecting the green belt.

“You need three things for development: Land, finance and planning. There are huge brownfield sites, publicly owned by Transport for London, the National Health Service and Greater London Authority, for example. Some are planned for use, but there is an enormous amount of land available. So you don’t need to build on the greenbelt. We need 46,000 to 48,000 homes built a year, and we have enough land to build on… without touching it.”

Goldsmith is bold when it comes to finance. “London property is seen as a safe place to invest in a turbulent world, and this is largely seen as negative as property is bought and not used. So why not set up an investment vehicle, a London development fund, that attracts the same investment used to deliver growth and development, turning that negative into a positive? As the mayor I could provide that.”

And it’s also about transport. “It’s fundamental that we need to expand capacity. Rail will witness 60 per cent more use in the next 15 years and the network needs to be grown just as quickly. I’d also follow Boris’ lead in keeping an emphasis on cycling.

“Buses need to be more efficient. We can’t have the current situation where an average bus has just 16 passengers, and we need electrification of the fleet as soon as possible.”

Goldsmith is standing against three experienced and accomplished administrators: Andrew Boff, Syed Kamall and Stephen Greenhalgh. Goldsmith believes what London needs from the next mayor is someone who is “able to get a good deal from government and hold them to account when they’re wrong. “I’ve delivered for my constituents on a wide range of issues and held government to account when I needed to.

People in my constituency know I’m on their side regardless of their politics, and I will work equally hard for the benefit of London and Londoners if I am elected.”