They are the Caribbean Islands of space exploration – Nasa's top exoplanet recommendations offer landscapes you can only imagine, intense heat and out-of-this-world views.
HD 40307g, Kepler-16b or Kepler-186f have been picked by the space agency's Travel Bureau, primarily because you are less likely to explode, implode or casually drift off into space than on any other exoplanet – they are at just the right distance from their central stars to be in the “habitable zone” for life.
That might not make you over the moon about travelling there, but don't worry – Nasa isn't suggesting you hop on a Virgin Galactic and fly 475 light years away this afternoon. This is very much a prospect for the future, once humans know a lot more about these far away planets.
To illustrate what visiting any of these planets would be like for a human, here are three extraterrestrial travel posters created by Nasa's Jet Propulsion Laboratory (download high-resolution versions here):

Kepler-186f: Where the Grass is Always Redder on the Other Side 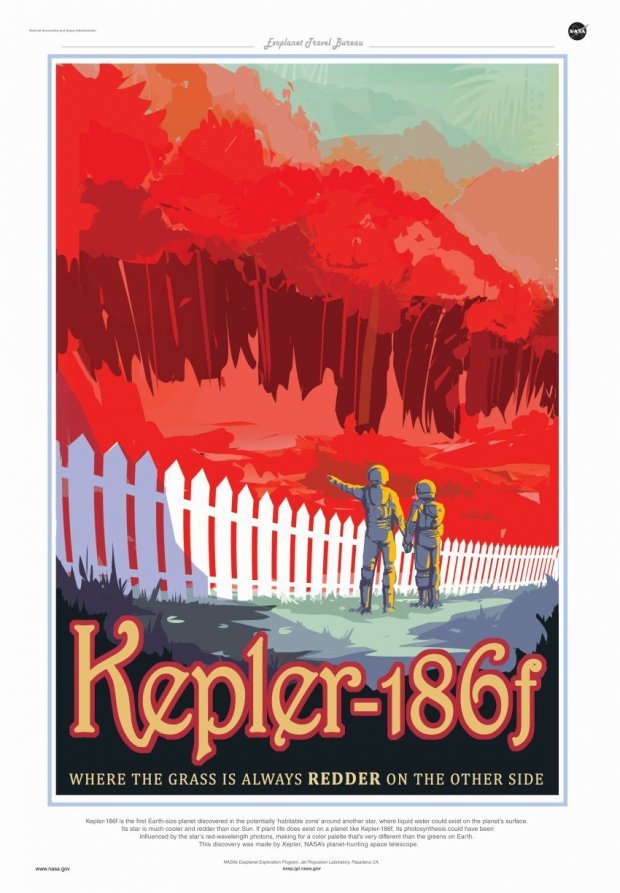 Nasa says: Kepler-186f is the first Earth-size planet discovered in the potentially 'habitable zone' around another star, where liquid water could exist on the planet's surface. Its star is much cooler and redder than our Sun. If plant life does exist on a planet like Kepler-186f, its photosynthesis could have been influenced by the star's red-wavelength photons, making for a colour palette that's very different than the greens on Earth. This discovery was made by Kepler, NASA's planet hunting telescope.

HD 40307g: Experience the Gravity of a Super Earth

Nasa says: Twice as big in volume as the Earth, HD 40307g straddles the line between "Super-Earth" and "mini-Neptune" and scientists aren't sure if it has a rocky surface or one that's buried beneath thick layers of gas and ice. One thing is certain though: at eight times the Earth's mass, its gravitational pull is much, much stronger.

Kepler-16b: Where your shadow always has company

Nasa says: Like Luke Skywalker's planet "Tatooine" in Star Wars, Kepler-16b orbits a pair of stars. Depicted here as a terrestrial planet, Kepler-16b might also be a gas giant like Saturn. Prospects for life on this unusual world aren't good, as it has a temperature similar to that of dry ice. But the discovery indicates that the movie's iconic double-sunset is anything but science fiction.