Now isn't the time to bet on bookies, apparently: despite lucrative opportunities around the election, William Hill suffered a fall in operating profit of 19 per cent in the first quarter. Online operating profits dropped 38 per cent while sports betting revenues were hit by the company's largest ever loss-making week in January. The FTSE 250 company's share price was down 3.3 per cent in early trading.

Like its rivals William Hill has been hit by the double whammy of the point of consumption tax (POCT), which took effect in December, and the rise in machines games duty (MGD) from 20 to 25 per cent introduced in last year's Budget. A winning streak for punters also had the bookmaker on the back foot, which led to the company's largest ever loss-making week in January. 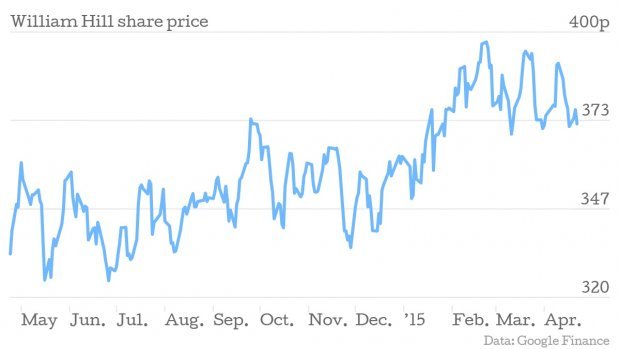 As expected, group operating profit was impacted by a £20m increase in gambling duties following the introduction of POCT in December 2014 and the increase in the MGD rate in March 2015.

However, we are well positioned to benefit as the UK online market evolves following the introduction of POCT, with our ongoing technology investments expected to benefit both product and customer experience and with a substantial marketing commitment.

William Hill has taken a battering from a hostile tax and regulatory environment but hopes reductions in staff and shops will keep the company in a solid financial position. Looking ahead, William Hill hopes its digital offering will deliver strong growth and that it will complete its Eclipse machine roll-out in retail.