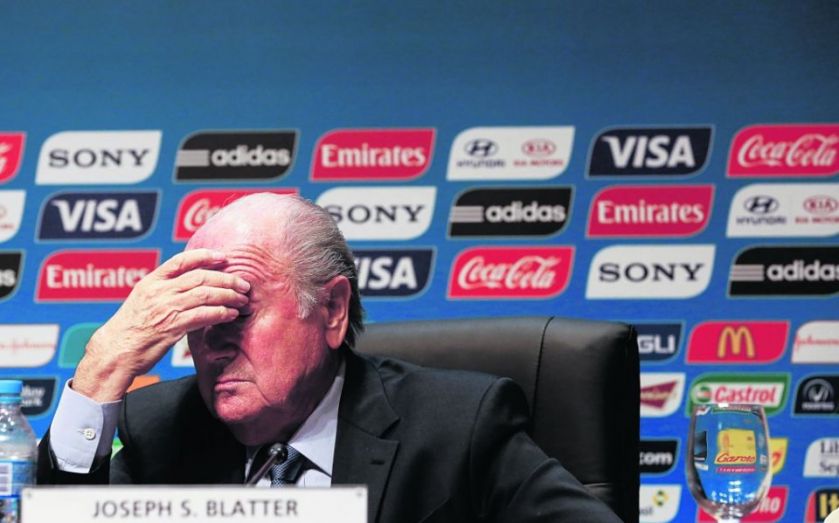 Britain's bosses have piled more pressure on Fifa’s sponsors to end their support for the under-fire football governing body.
In light of the latest scandal to engulf Sepp Blatter’s organisation, the Institute of Directors (IoD) called on sponsors and their shareholders to act, unless Fifa radically reforms its standards of governance.
Visa has become the first major sponsor to publicly threaten to withdraw its money, after the arrest of senior Fifa officials on corruption charges this week. Coca-Cola also expressed its concerns, yet there has been a lack of action from many big-name sponsors.
Fifa earned around $1.6bn (£1.04bn) from marketing rights in the run up to the 2014 World Cup in Brazil, accounting for nearly one third of its revenues.
“As a minimum sponsors have to say to them: unless you fundamentally change your governance structure so that it becomes more accountable, potentially we could in the future withdraw our sponsorship funding,” Dr Roger Barker, director of corporate governance and professional standards at the IoD, told City A.M..
Barker said that no member of the IoD would be allowed the kind of governance structure that is operated by Fifa. “It’s an astonishing structure,” he said, while also warning that continued association could ultimately damage the reputation of the sponsors themselves: “A lot of these sponsors of Fifa pay a huge amount of attention to the governance of their own companies, in order to have a good reputation as a company, and yet they are putting money into an organisation that appears to be hugely lacking.”
Barker added: “In a way it kind of negates the governance structures they are putting in themselves.”
https://twitter.com/MayorofLondon/status/603944533341171713
Sportswear brand Adidas is another big-name sponsor. One of its major shareholders has already sounded warnings that the company could damage itself by continuing to be associated with Fifa.
Ingo Speich, a portfolio manager at Union Investment, one of Adidas’ top 20 shareholders, told the Financial Times: “Adidas must be careful that its Fifa sponsorship does not become a reputational risk and damage its brand.”
Other major Adidas shareholders declined to comment when approached by City A.M. yesterday.
In a statement on Wednesday night, credit and debit card giant Visa said: “As a sponsor, we expect Fifa to take swift and immediate steps to address these issues within its organisation. Should Fifa fail to do so, we have informed them that we will reassess our sponsorship.”
https://twitter.com/David_Cameron/status/603922475437727744
Meanwhile Coca-Cola said: “This lengthy controversy has tarnished the mission and ideals of the Fifa World Cup and we have repeatedly expressed our concerns about these serious allegations.  We expect Fifa to continue to address these issues thoroughly.”
The new secretary of state for culture, media, and sport, John Whittingdale, urged sponsors to take action. Speaking in the House of Commons, he said: “It is important that other sponsors reflect on their links to Fifa and consider following Visa’s lead.” This was a view endorsed by Prime Minister David Cameron, who also called on Fifa president Sepp Blatter to stand down from the role he has held for 17 years.
And London Mayor Boris Johnson wrote on Twitter: “Fifa’s credibility is shot. It cannot begin to recover its reputation without wholesale change. Without change Fifa is finished.”
Share:
Tags: Fifa crisis