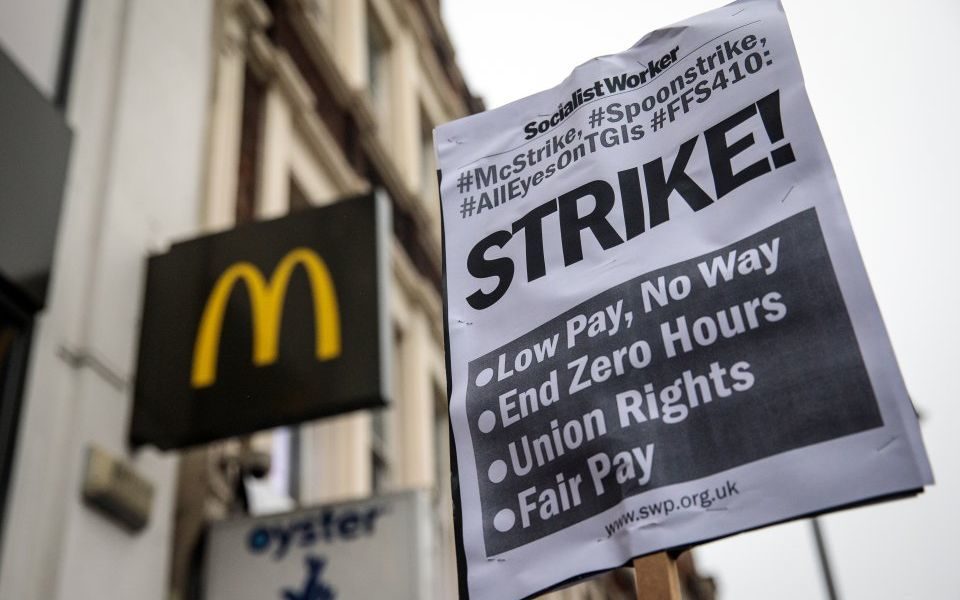 Uber Eats workers are to stage a strike later today with a small number of workers from JD Wetherspoon and TGI Fridays over gig economy pay and conditions.

Some McDonalds and Deliveroo workers were also set to take part in the rally in Leicester Square at 11am this morning, while Uber Eats drivers are preparing their own separate strike outside its offices later in the afternoon.

The GMB union's regional officer, Steve Garelick, said: "The continued attacks made on workers from rate reduction without consultation to gratuities being hived off show that there is nothing wholesome in the service and gig economy sector.

"Today shows a frustration that the last two Conservative governments have created in an economy where companies play roulette with other's lives and ignore their obligations as humans.

"This is demonstration is a chance to make sure GMB is heard loud and clear, and highlights the low incomes and false contracts that plague workers in the UK."

An Uber Eats spokesperson said: “In response to feedback from couriers we recently made some changes to our payment structure in London, which brings it into line with other cities. Since coming in to effect we’ve seen average earnings during mealtimes increase by 30 per cent, from £8.30 an hour to over £10 an hour.

"Making improvements in response to courier feedback is a top priority, such as the sickness, injury, maternity and paternity protections we recently introduced. Our door is always open for individual couriers to speak to us about any issues they're having."

Wetherspoon chairman Tim Martin said: “Wetherspoon intends to increase pay in real terms in most years, subject to economic conditions, as we have tried to do in the past.

“It is understandable that there is pressure on pay with low unemployment and a housing shortage.However, bonuses, free shares and other benefits should be taken into account in assessing pay.

“It’s easy to be cynical about business , but companies like McDonalds, TGI Fridays and thousands of other individuals and businesses make a big contribution to the economy, and provide valuable work and experience for many people.”

“This is against a backdrop of more people choosing to join our business, with over 1,700 new employees since May (the last attempted industrial action). As a growing and successful organisation we, along with our franchisees, will continue to invest in our people and create quality jobs and opportunities for all. We will also continue to offer people a choice between fixed and flexible contracts; as our people have told us they want to make the decision for themselves and choose what works for them. Since offering the choice to our people, 80% have made the decision to stay on a flexible contract.”

A McDonalds spokesperson said: “All restaurants remain open as usual today despite frustrating attempts by protestors at a handful of locations to impact our customers, and our restaurant teams. This is the third attempt at action; and according to our records none of our people are on strike today. Any suggestion this activity is widespread and growing is not accurate – fewer restaurants, fewer employees involved and less support for the union from our people."