Trisara hotel review: Foraging needn't be at the expense of luxury 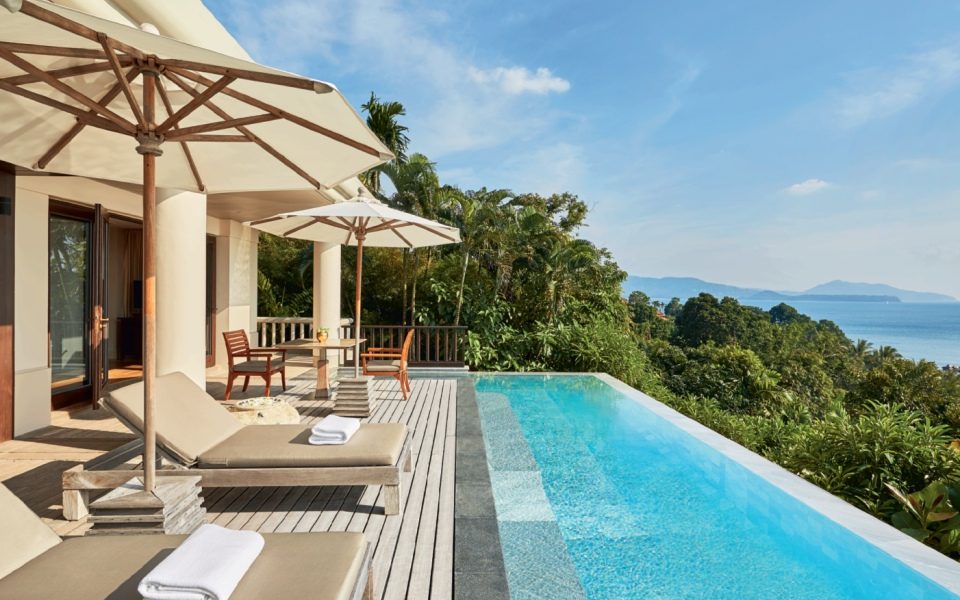 Foraging is all the rage but, despite its fashionable foodie status, it does rather bring to mind getting grubby at the bottom of the garden, thrashing around with a set of secateurs, or simply pretending to be a badger. Surely there’s a more glamorous way to liven up lunch? So, off to Trisara in Thailand you fly.

The idea was mainly sold to me on the alliteration: Foraging in Phuket. Yes, I’m aware it’s pronounced with a hard P, just go with it. The main thing is this; Thai food rocks, and much of its key produce – herbs, spices, roots, fruit, veg, flora and fauna – are to be found in the fields and forests a trowel’s throw from my hotel.

This is where the glamour comes in. Renowned for its authentic food, Trisara is the grande dame of Phuket’s five-star beachside boutique scene. In sanskrit, it means “the garden in the third heaven” and, since its opening in 2004, it’s grown to 60 spacious pool villas and two-six bedroom private residences, all with breathtaking views of the Andaman Sea and its hibiscus-hued sunsets.

It’s utterly tranquil, located in the upmarket north eastern part of the island, well away from the pumping heart of sleazy Patong, and a convenient 15 minutes’ drive from the airport.

Among the items in our baskets fall okra, aubergines, bananas, hot basil (the chef’s favourite), white lotus, fingerroot, lemongrass (which is put in everything, seemingly, even the hotel soaps), tamarind, zedoary, and shoots of tender bok choy…

The property is spread across 40 acres of artfully-managed tropical gardens, tumbling down to a beautiful yet rugged private beach. Each peaked-roofed villa is protected by dense, verdant canopies of trees and bushes that lend absolute privacy. So, it’s fair to expect that all the guests spend 80 per cent of their time at Trisara in the buff.

There’s a coast-hugging yoga platform and, once you’ve got your stretching out the way, a Muay Thai boxing ring. The cyan sea is diverting, though, so if you’ve had your fill of the private infinity pool you may wish to hit the waves in one of Trisara’s fleet of yachts. And if you find all that sun-soaking a bit knackering, head to the Jara Spa where the therapists were trained at Bangkok’s Wat Po temple – the gold standard in Thai massage.

Trisara offers three dining options, including PRU – the island’s only Michelin-star winner. The menu is all about farm-to-table, and the produce doesn’t have far to come. The restaurant’s name stands for Plant Raise Understand. Sustainable fine dining is à la mode in the West, but at Thai tables it’s a relatively new concept. On the north-east side of Phuket, set around what was once a tin mine, is the PRU Jampa farm and, surrounding it, bountiful jungle. The site totals 96-hectares. Chef Kla and I set to work with the secateurs.

Among the items in our baskets fall okra, aubergines, bananas, hot basil (the chef’s favourite), white lotus, fingerroot, lemongrass (which is put in everything, seemingly, even the hotel soaps), tamarind, zedoary, and shoots of tender bok choy from the raised garden beds. In the wildlands, we discover butterfly pea – an edible flower that tastes exactly like peas – mangosteens, exotic bilimbi, dok dhala (ginger flower) and wild mushrooms. Back in the Pru kitchen, these riches are reimagined in an Asian-European fusion menu.

Snakehead fish, catfish and blackfish are caught in farm’s three lakes, and chickens and ducks are also reared on PRU Jampa. The hotel’s free range eggs are spectacular. Seventy-five percent of Trisara’s ingredients come from Phuket. Meat is purchased at the morning market in Phuket Town, and saltwater fish arrives in hand-hewn rattan traps and nets delivered by the fishermen themselves; translucent-skinned tuna and hefty amberjack still flopping about.

PRU sets its six-course dining experience with wine pairing at 7,000 Thai Baht (£170). The menu changes seasonally, but there are some dishes that have become famous and are always on in some variation: black crab from the mangroves, in a Phuket coffee reduction; smoky roasted carrot cooked in its own soil, with fermented carrot juice and cured egg yolk; duck, dry-aged for five days for intense flavour, with shiitake. Artisanal goat cheese comes from the north of the country, Chiang Rai and Chiang Mai. I attack the buchette and colliné.

It wouldn’t be a proper trip to Thailand if you didn’t head to some down-and-dirty food shacks while you’re here, and the Michelin inspectors are an adventurous lot. So, while PRU is the only place on the island with a star, other less polished places come officially recommended, and Trisara offers a gastronomic heritage tour of Old Town Phuket’s highlights.

Situated in a 130-year-old Sino-Thai mansion with chipped mosaic tiles and 1950s tea and coffee ads on the walls, Raya is famous for its (rather spicy) crabmeat curry. Third generation-owned Go La serves Hokkien-style fried noodles with runny egg yolk. The table cloths are blue and green plastic, advertising Sprite, and the seats are upturned bottle crates.

Trisara meets the needs of every jet-set traveller in search of pools and pampering, but they go above and beyond when it comes to food; whether it be taking their guests foraging, presenting impeccable and inventive dishes, or pointing out the places the locals eat. You won’t just come home with a tan, you’ll return with a knowledge and appreciation for Thai ingredients and cooking, and probably some bags of seeds. Back to the bottom of the garden you go.

Room rates at Trisara start from £460 per night. For more information, visit trisara.com