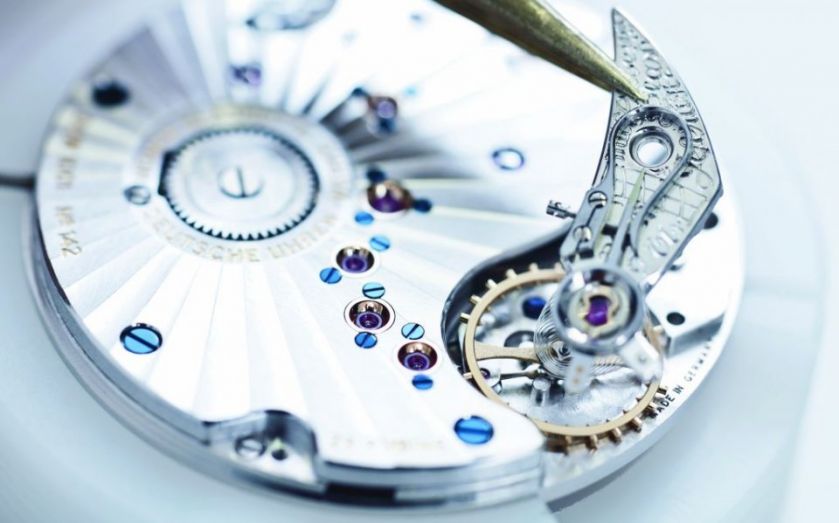 Let us start with a description of two dramatically different approaches to highend mechanical watchmaking. Bear with me. Firstly: “At certain moments you might leave the drawing and let the metal guide you… I really value the fact that I can make these small decisions all the time about every part while hand-crafting each one of my watches.”
Contrast that with: “Cartridges loaded with the watch arrive at a workbench automatically, while a screen on the bench lists the operations to be carried out, the parts to be used and the order in which to proceed. Once the operation is complete, say the placing of a bridge, the cartridge robots on to the next step.”
The latter is a recent account of life behind closed doors at Goliath watch brand Rolex. The former comes from Roger Smith, sole apprentice of George Daniels – the only remaining protagonist of truly British, truly handmade watchmaking. 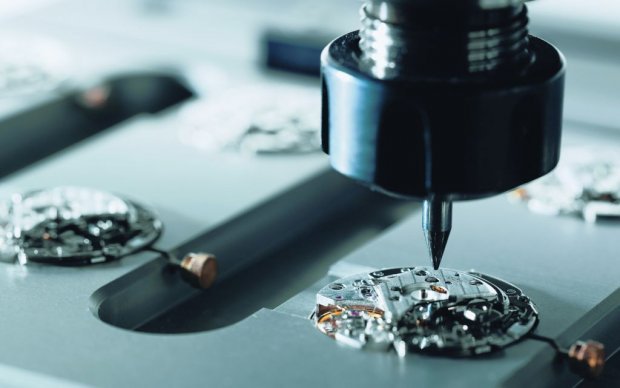 Purists may instinctually side with Smith and his small team of artisans on the Isle of Man, turning their nose up at the mechanised factory with its thousands of workers clocking on and off the production line. But consider this: Roger wears a Rolex.
While working in Manchester’s Mappin & Webb in his teen years, he saved and saved for his prized Oyster Perpetual and he still wears it with pride, albeit for very different reasons to customers of his own £90,000-plus Series 2 watch. For, as any watchmaker will freely admit, Rolex watches are, in many respects, the best in the world; they’ve absolutely mastered the manufacture of the ultra-reliable mechanical movement: a “base calibre” that’s easy to service, robust despite its delicate parts, and – useful when it comes to watches – good at telling the time.

The Swiss factory of Breitling

Rolex’s rigorous quest for precision is just as impressive as the artistic approach to hand-finishing that goes into a Smith dial (it takes three weeks to complete each one, incidentally). Achieving perfect repeatability is the hardest aspect of industrial movement manufacture – every component must be absolutely identical for quick assembly and predictable performance; a watchmaker who lovingly handcrafts his movement is constantly “correcting” every component’s inconsistencies. Creating industrial volumes is, in many ways, a far more complex process, since everything must be planned well in advance and the slightest error can have major consequences.
“A Rolex is great value for money,” says Peter Roberts, a Briton who started as a watchmaker at Rolex in 1972 and now trains employees for the Swiss giant, “and the majority of that value is in the movement. In fact, compared with another watch around the £3,500 mark, the cost of the movement inside a Rolex will be four or five times that of its rival. An awful lot of that cost is quality control – the number of checks is higher than anywhere else.”
Anyone on a tour of the Rolex facility, or indeed any of the workshops stretching from Geneva along the chocolate-box-pretty Watch Valley in the Swiss Jura mountains, will appreciate the vast effort involved in precision-machining, polishing, assembling, testing, disassembling, adjusting and finally re-assembling the hundreds of components inside a mechanical watch. Despite the sweeping panorama of foothills and cows visible through the window, a loupe remains glued to every watchmaker’s eye, a wormhole into their microscopic world of wheels, levers and springs, all populating a piece of metal barely larger than a penny. Then there’s the small matter of engineering that watertight case to within micrometre tolerances. And what about the dial decoration, or the stitching on that alligator strap?

The construction of a Rolex

In today’s era of automated manufacture, finish has become more important than ever in imparting value to a watch – more than a third of a watch’s final cost, in fact, in the case of Switzerland’s revered elite (Audemars Piguet, Cartier, Jaeger-LeCoultre, Patek Philippe, Vacheron Constantin and Zenith among them). Even these grande dames employ computer-controlled electroerosion and multi-axis milling to create the majority of their components, so hand finishing – chamfering, engraving and polishing – is essential to maintain that reputation of handcraftsmanship. Jaeger-LeCoultre, for example, has singlehandedly revived the lost art of dial enamelling, establishing one of the industry’s only in-house enamel workshops at its vast facility in the Vallée de Joux.
For most, Patek Philippe is the king of fine Swiss watchmaking. Unsurprisingly, their watches come with pricetags to match, both in shop windows and at the auction house, where a 1930s Patek “supercomplication” fetched £15.1m last month, the most ever paid for a timepiece. But Patek doesn’t trade off its watches’ investment value. In fact, the brand’s margins are said to be narrower than most, so intensive is its production process. It may set you back a shade over £2m for the new Grandmaster Chime wristwatch celebrating Patek’s 175th anniversary, but seven years’ development and a cosmos of hand-assembled parts (1,366 in total) doesn’t come cheap.
“We never say Patek Philippe is a good investment,” says UK boss Mark Hearn. “Rather, your money goes towards all the effort we afford to the tiniest details. We polish the microscopic end of a pinion, which is thinner than a human hair. Not because you’ll see it, but because it improves timekeeping performance that tiny bit. Our customers expect nothing less. If you take that attention to detail and multiply it through the whole watch, across all 300 or so components, you start to understand what a Patek Philippe watch represents and the true value of it.”

Which explains why so many watches wear their heart on their sleeve and insert a sapphire-crystal into the caseback. Like the transparent cowling over a Lamborghini’s rear-mounted V12, it offers a window into a mesmerising world of precision mechanics.
Developing and setting up the production of even a basic mechanical movement is an enormously expensive enterprise; tens of millions at the very least, according to Roberts. Most companies positioning themselves below the £5,000 price-point won’t bother – why invest in buying lathes, CNC milling machines, tools and CAD programs to develop an unglamorous basic movement that might not even keep good time? Especially when someone like Swatch Group’s ETA subsidiary will provide you with something tried, tested and well respected, with plenty of scope for personalisation.
Even in the luxury car world, the most cynical of detractors will forgive a brand for out-sourcing parts of an engine, or even the whole engine, because that’s the best way to guarantee quality and reliability. This is generally the case in the watch world, too, from the engine ticking inside to the surrounding steel or gold “chassis”.
But things are changing. High-end brands such as Bvlgari and Chopard are bringing more of their development and production in-house, risking the customer churn that follows the concomitant price hikes. Even smaller brands such as plucky British upstart Bremont are spending millions developing their own movements. Why?
It isn’t necessarily for bragging rights. You see, Swatch has announced a reduction in, and eventually discontinuation of, the delivery of kits from ETA to non-Swatch clients by 2020, save for loyal and historic customers. Why spend billions of francs a year tweaking, honing and improving only for other brands to treat it like a “supermarket”, ploughing their revenues back into marketing rather than investing in their own innovation and technical progress? Moreover, Swatch’s recently deceased president, Nicolas Hayek Snr, warned that over-reliance on one source could lead to a collapse as catastrophic as that of the late 1970s – the collapse, incidentally, from which Hayek originally saved the Swiss industry by inventing the Swatch Watch. Despite the initial uproar, the subsequent race to prepare for a brave new world without ETA’s movements has, to Hayek’s credit, worked wonders for watchmaking. Many brands have accelerated their own integration and verticalisation, while obscure third-party industrial suppliers have been thrust into the limelight.

It’s even reached the stage where bemused fashion editors are being flown to the unveilings of balance springs, so enthused are brands by their burgeoning independence. Nomos for example, has invested €7m into developing one tiny component at its converted train station in Saxony’s horological hub of Glashütte. Given its new, proprietary “Swing System” proved such a mammoth task, it’s impressive that the watches kitted out with this mechanism are less than €1,000 more than those without it. What’s more impressive is that this year’s beautiful Metro is still only £2,390 – a good 50 per cent less than one should expect from an inhouse manufactured watch.
It’s not only movements that are fuelling prices – watches have never been manufactured in such a cutting- edge way. Take Breitling, whose multi-axis computer- controlled milling machines’ heat-exchange units keep the factory warm through the freezing Swiss winter. There’s even a laboratory on site, where chemists, physicists and mathematicians scrutinize the tiniest things with electron microscopes and torque meters. One robot analyses the “feel” of Breitling’s chronograph pushbutton, just as Bentley has honed the exact “clunk” of its doors. A single watch takes over a year to complete its journey along the production process. Meanwhile, Bremont is investing millions to make watches that fall within a far lower price bracket, in a country whose watchmaking capabilities have been long lost – Britain.
“The first problem we faced when setting up our Henley-on-Thames workshop,” says Giles English, who founded Bremont with his brother Nick 10 years ago, “is finding the watchmakers in the first place. The investment in training people to assemble entire movements is huge. Then there’s kitting the factory out – one workbench costs £2,000, and that’s before you’ve bought the chair – plus the agonisingly stringent quality control process…”
It’s only when you really delve into the world of highend timepieces that you realise how insanely complex – and shudderingly expensive – they are to produce. Decades of innovation, tweaking, improving and evolving have gone into the hundreds of components, silently spinning beneath the caseback, most of which the average watch buyer doesn’t even know exist. Never again will you have to ponder how fine watches justify their astronomical price tags. In fact, they’re something of a bargain.