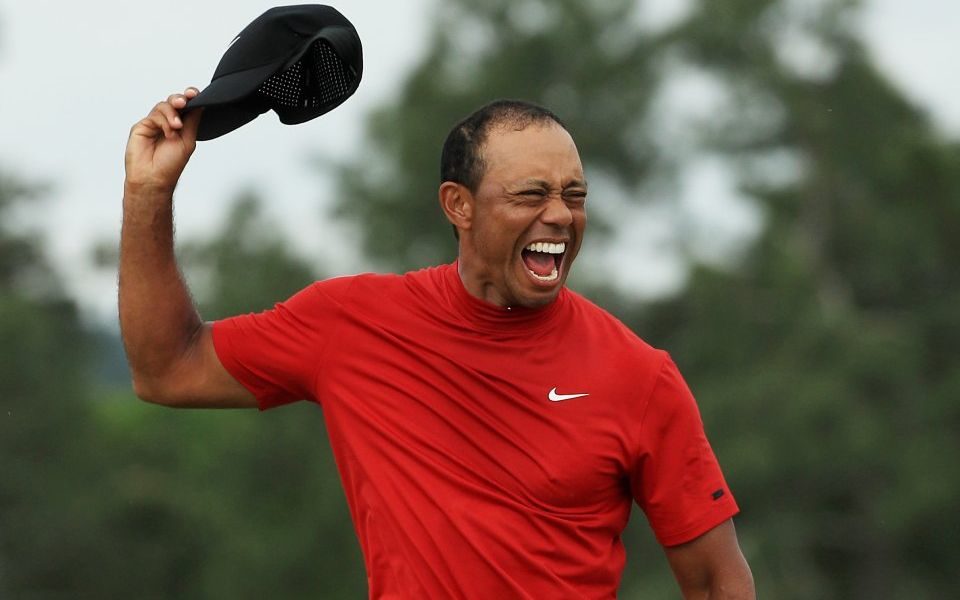 When Hollywood scriptwriters come to pen the screenplay for the Tiger Woods biopic, the 2019 Masters will surely be the setting for the hero’s redemptive and climactic final scene.

Eleven years after winning his last Major, the man who still draws audiences to golf like nobody else achieved what just a few months ago seemed barely believable and won his 15th.

On a dramatic final day, Woods claimed a fifth Green Jacket and his first since 2005 by holding his nerve while a host of top-class rivals, including overnight leader Francesco Molinari, wavered.

Now that he has proven he can still win the biggest events at the age of 43 – and after a decade overshadowed by injury and off-course problems – Woods is back on the trail of Jack Nicklaus’s record 18 Majors.

Woods kept a lid on his emotions until holing the putt at 18 that completed a round of 70, saw him finish on a score of 13 under par and clinched a one-shot win over fellow Americans Dustin Johnson, Xander Schauffele and Brooks Koepka.

He raised both arms aloft with a visceral roar, matching the ferocity of the appreciation of the crowd, before seeking out his son, Charlie – not yet born when Woods won his previous Major, at the 2008 US Open – for a lingering embrace.

“When I tapped the putt in I was just looking for Charlie somewhere,” he said. “It’s come full circle. My dad was here in ‘97 [Tiger’s first Masters win] and now I’m the dad with my kids here.

“This would be up there as one of the hardest I’ve ever had to win because of what has transpired over the last few years. I couldn’t be more happy and excited.”

Molinari, who began the day with a two-shot lead, appeared intent on repeating his final round at last year’s Open, where he won a first Major with a flawless display featuring 16 pars and two birdies.

For most of the front nine it worked and the Italian even extended his advantage to three at the fifth hole. After 10, he led Woods by two shots and looked to be in control.

That changed dramatically at 12, where he found water off the tee and made double bogey, slipping into a tie with Woods and Schauffele, who were soon joined by Johnson and Koepka.

Momentum swung irrevocably towards Woods at the 15th, where Molinari made another double bogey after finding water and Tiger birdied to go clear.

And when Woods landed his tee shot at the par-three 16th to within a few inches of the pin, a two-shot cushion that would see him through the final holes was a formality.

From being a two-horse race on the front nine, the contest was thrown wide open down the stretch, with Schauffele and Johnson surging into contention with four-under-par rounds of 68.

Three-time Major winner Koepka’s challenge was dented by a double bogey at 12 but he eagled 13 and birdied to stay in the chase.

Jason Day threatened with a 67 but had to settle for a share of fifth with Molinari, Tony Finau and Webb Simpson, while Jon Rahm (68) and Patrick Cantlay (68) were a shot further back.

Birdies at 13, 15 and 16 proved decisive for Woods, however, whose conviction seemed to grow with every hole of the back nine.

After flirting with victory at the Open last year, Woods returned to the winner’s circle at the Tour Championship in September, raising hopes that he could yet add to his 14 Majors.

Now that the 15th is in the bag, Nicklaus’s tally suddenly looks attainable. The next Major in the calendar, the US Open, is being held at Pebble Beach, where Woods won it in 2000 by a record margin of 15 shots.

The Hollywood ending may have been secured, but Woods may only just be getting started again.