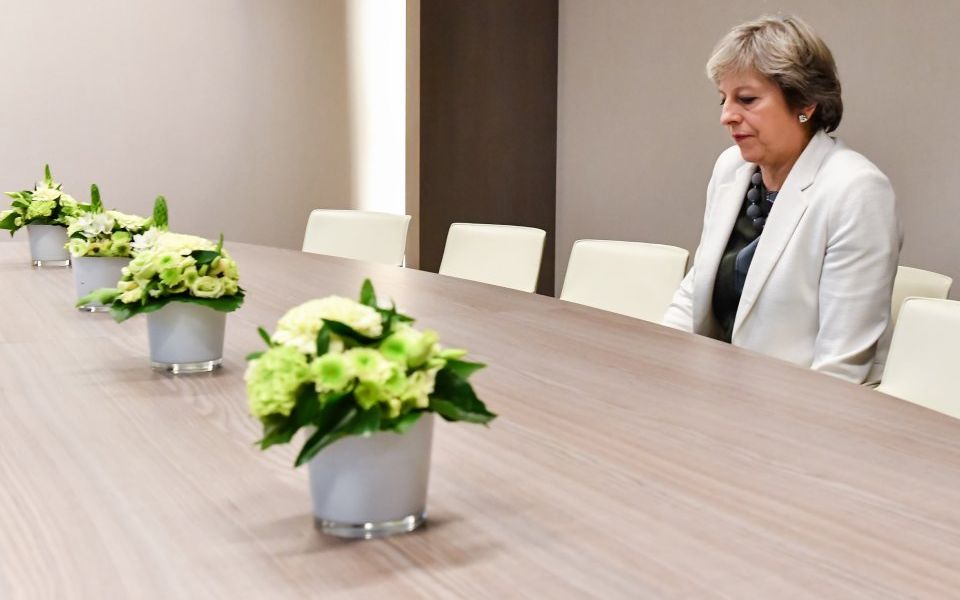 An opening day Conservative conference speech by former CBI Director-General Digby Jones might not have been expected to diagnose the Prime Minister’s key weakness.

But defending Theresa May’s Brexit approach, the former Labour minister unwittingly exposed the reason that the Prime Minister has alienated much of her party: she is a vision-free zone.

Riffing off Theresa May’s earlier Marr interview, Jones warned politicians and party members about the consequences of division over Chequers. “You need to come together. Leave the ideology at the door, and understand what works,” he demanded.

This, it is fair to say, is how the Prime Minister likes to perceive herself – as a modifying force that deals in the “real world”, restraining the excesses of left and right, and tackling problems as they arise with achievable solutions.

The truth is that, unmoored from any substantial vision for Britain, May stands for little. And as a result, her government falls for much.

All of us that have ideas think that they work, or could work – or else we would not advocate them.

A call to leave ideology aside is therefore really an instruction to give up your ideas and fall in line.

The problem for May is that she is mentally boxed in by “what is” and sees governing as mere problem-solving, while much of her party rightly see Brexit as an opportunity to think about “what should be”.

The Prime Minister appears devoid of a framework for considering the role of government, where power should reside, and any limiting principle on what the state should do.

The result is that her administration is both ultra-conservative where radicalism is required, and ultra-interventionist and nit-picky in areas that either matter little, or where the case for freedom is strongest.

Without that vision to guide her, increasingly the political weather is defined by her opponents, with the government desperately trying to ape the opposition to neuter their attacks.

In the Brexit negotiations, the Chequers proposal she clings to, for example, seems to be predicated on achieving damage limitation – rather than the seizing of post-Brexit trade and regulatory reform opportunities.

It is about protecting existing supply chains and the status quo in Northern Ireland, rather than an expansive global free-trade agenda.

But her caution extends far beyond her approach to leaving the EU. Any sort of agenda for tax or public service reform seems to have been abandoned entirely, despite sustained slow growth and the terrifying structural ageing challenge to come.

Instead, new small revenue sources are constantly being earmarked to prop up all existing government activity, with modest cash injections when cracks are identified.

Yet, rather than truly get to grips with boosting supply, the first idea announced for the whole conference was to impose higher rates of stamp duty on foreign buyers of new homes, with revenues used to target rough sleeping.

In fact, this is perhaps an exemplar par excellence of Mayism. It is a policy that would have a trivial impact in the grander housing market, yet comes with unintended consequences and costs – not least in undermining May’s own declared desire for Britain to be perceived as open to international capital flows post-Brexit.

Furthermore, by linking the revenues to rough sleeping, she is doing Jeremy Corbyn’s job of undermining a market economy for him – implying that wealthy foreign buyers cause homelessness.

A study by LSE London shows this is not the case. It found that the supposed buy-to-leave problem of foreign-bought homes left empty was trivially small. And, contra May, the pre-sales to overseas buyers actually often enable developers to build faster by dissipating risk – and therefore making more affordable housing available than would otherwise be the case.

Unwilling to truly get to grips with the issue, the government is pushing a non-solution to a problem that is being defined by its opponents.

Sadly, this is typical of where the current government is at.

At the conference, one will hear much about policies that should be adopted, or things that the government must do to “appeal to voters”.

But a prerequisite of developing new ideas should be some underlying thesis of what one wants to achieve. Where Theresa May is concerned, nobody seems to know.

Yet, absent that insight, nothing much new is being achieved, and the opposition are in the ascendancy.