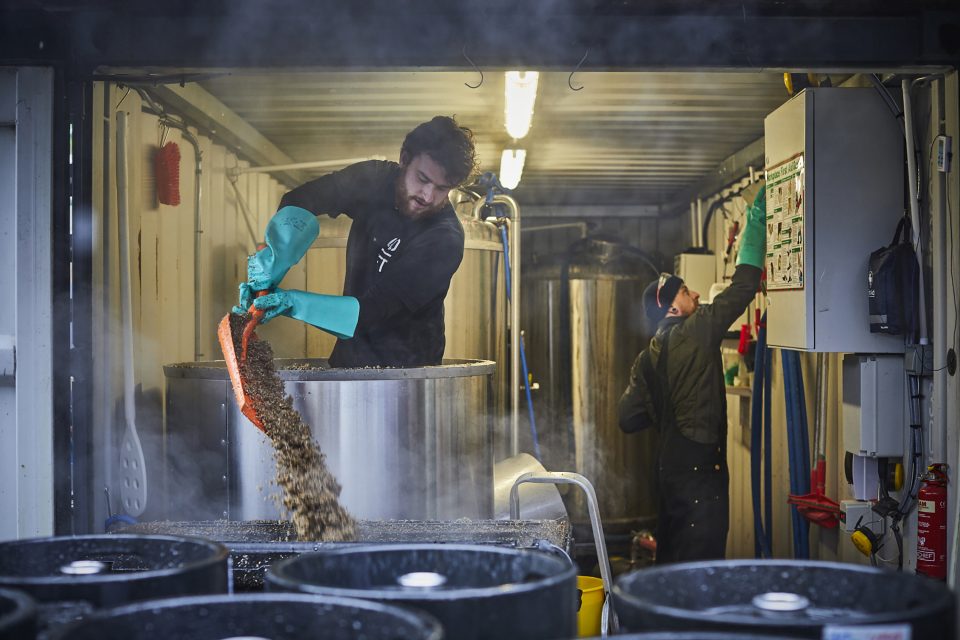 City A.M. Deputy Editor Andy Silvester speaks to Steve Ryan – one of four beer-lovers who founded 40FT Brewery in Dalston and have guided the east London favourite through a tough summer

Surrounded by shipping containers in Dalston, Steve Ryan tells me that he had an early warning of Britain’s coming lockdown back in March.

“I’m Irish. 17th March. St. Patrick’s Day was cancelled in Ireland – and the weekend before, when everyone was celebrating – and I thought if Ireland is cancelling St. Patrick’s Day, that’s going to be it,” he says, over an ice-cold pint of his brewery’s “Disco Pils” beer.

Founded in 2015, 40FT has grown into a local brewing powerhouse in east London. What began as two twenty-foot shipping containers – hence the name – has almost quadrupled in size. As we enjoy the last of the September sunshine, the cargo carriers sit like lego bricks around an open courtyard just off Dalston High Street.

But like every business, lockdown hit hard – and for brewers like Steve, it couldn’t have come at a worse time.

“We get paid on thirty and sixty day terms, so in March is always our tight point. We’re living on Dry January invoices, and it may as well be Dry February now, too.” Combine that with an uptick in orders as people start coming back to the pub and, as Steve puts it, and “our working capital is absolutely squeezed.”

But as all good entrepreneurs do, Steve burst into action. Suppliers were called and deals worked out, and most importantly, acted quickly to find new ways of getting his beer into people’s hands.

“I built the webstore that week, through Squarespace who made it really, really easy. It only took about two days to build.”

That was the start of a new journey for 40FT. A predominantly wholesale business, selling 90 per cent of its beer to pubs,bars and restaurants in east London, was all of a sudden shifting cans via home delivery.

“We started with the cans, then we started doing gift vouchers here – when we’re open you double your money.” The gift vouchers raised more than £15,000, which covered running costs and wage bills, and also gave rise to another idea, from Steve’s wife, for people further afield than E8’s immediate surroundings.

“People were asking if they could donate their gift card. So my wife had a really good idea, which was doing that for the NHS. So we basically set up an NHS bar tab,” he says.

Read more: What to enjoy during London Cocktail Month this October

But for 40FT, the real lockdown salvation came with the slight easing of lockdown in May – and in the form of 8 pint mini-kegs.

“We had 200 of these filled, with a three month sell-by date on them,” says Steve, pointing to a now empty full keg next to us.

“And we had all those tanks up there,” meaning the cooled, conditioned tanks in one of the gigantic, pseudo lego bricks behind us.

“So we started doing mini-kegs. Myself and Edward, our sales guy, would alternate days, coming in and filling mini-kegs. We went through the 200 (full) kegs we had, and then we tapped the tanks,” he says, as the orders began to roll in.

The mini-keg has helped many a London brewery get through the past few months, as regulars at pubs brought the pub home in the dark days before the July 4th reopening of hospitality businesses. But at 40FT it seems to have been even more of a hit than elsewhere.

It even got to the point where Steve was contacting local pubs and bars which had beer sitting in their cellars, with a sell-by date that was going to mean it couldn’t be sold.

40FT promised to replace those kegs, if they could transfer the beer into mini-kegs and sell them.

And as pubs began to offer takeaway pints, demand picked up to the point that the brewing process could begin again with confidence that whatever was made would be sold.

“We shifted thousands of these mini-kegs, which would a huge saving grace.”

As he looks back on the last six months, Steve smiles the smile of a tired but happy man. “I haven’t had a day off” since the start of lockdown, he says, but “we’ve pivoted well, and quickly.

“I’m glad of the decisions we’ve made. We’ve gambled on quite a lot of them – some of them were easy, like the gift card, which has no major investment, and to keep the mini-kegs, there wasn’t a major investment – but sending our beer off to get canned by a new company, that was quite risky, but it’s paying off,” he says.

Winter will be tough, Steve recognises. He’s talking to his landlord, who has been understanding throughout, about fitting shelters and heaters in his outdoor taproom to ensure punters keep coming in. Like everybody, he’s concerned about the macro-economic hit of the end of furlough.

But he’s facing it with optimism. “This year has certainly given me confidence,” he says with a chuckle. Cheers to that, and to an east London brewery that’s shown plenty of resilience in 2020.

40FT can be found at Bootyard, Abbot St, Dalston, London E8 3DP, and on Shopify here. Throughout the month of October, £5 of every mini-keg sold by 40FT will donated to Tower Hamlet’s Women’s Football Club.