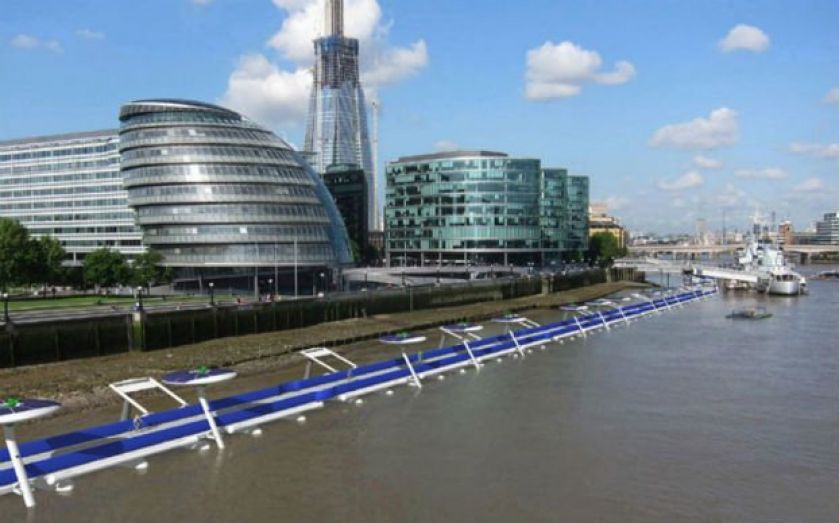 A group of architects, entrepreneurs and engineers are proposing to build a cycle path that floats on the river Thames to help solve the capital’s congestion problems.

The traffic-free Thames Deckway could stretch from Canary Wharf in the east as far as Battersea in the West, offering cyclists and pedestrians a safer route through the city.

The group behind the concept, the River Cycleway Consortium (RCC), is looking to attract a major “visionary” investor to back the ambitious project which it estimates will cost £600m.

The Thames Deckway has “considerable potential as a generator of healthy, sustained revenue” according to the group, with a toll costing the same as a single bus fare generating income.

Led by Architect David Nixon, creative entrepreneur Anna Hill and with engineering firm Arup and Hugh Broughton Architects on board, RCC has had meetings with the Mayor's office and Transport for London about the plans, recieving a positive response but no indication of any support as yet. However, RCC believes the project complements the city’s existing plans for a new east-west cycle super highway.

Completly self-sustaining from a combination of sun, tide and wind energy, the Thames Deckway would be positioned close to the south edge of the river, falling and rising with the tide of the Thames. It would also include ramps at strategic intervals along the route as well as pit stops along the way with shopping and refreshment facilities and could be built in as little as two years from the time it gets the green light.

Comnuters cycling to work along the path could also cut their journey down to just half an hour- the time it takes to travel the 12km path from end to end.

The innovative idea is "thinking outside the box" to resolve problems of traffic and pollution in the capital, the group said. Anna Hill told City A.M. the “bold solution” solved a number of problems in the city including cycle safety, pollution and Londoner’s health, as well as transport congestion.

The concept follows along the same lines as the popular idea for a Garden Bridge across the Thames by Joanna Lumley and Thomas Heatherwick in using the space of the river.

London needs to think outside the box of conventional solutions to solve its deep-seated traffic and pollution problems. One of the answers is staring London in the face. The river Thames, London’s main transportation thoroughfare from Roman times up to the 19th century, is overlooked today as a major travel artery except for a handful of passenger boats. Large stretches of water are often empty of any moving vessels. The Thames offers vast, untapped potential to ease and improve London’s infrastructure problems. What is needed is imagination to unleash it.

In addition to finding investment, the next step will be a study of the feasibility of the scheme.