Taking a walk on the wild side of Sardinia 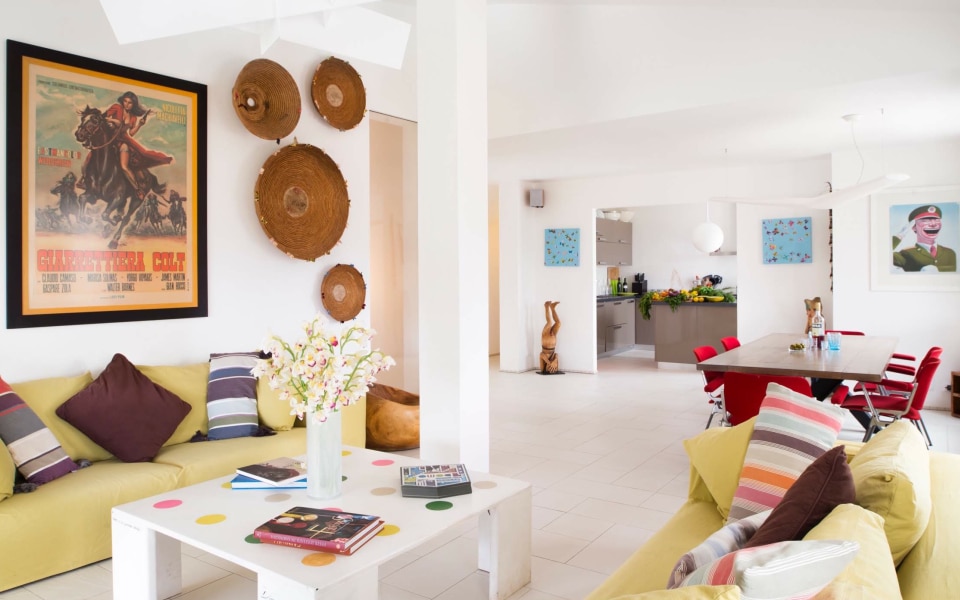 Flying into Sardinia’s Cagliari, the ancient city spreads out below you, and then gives way to the packed beach resorts of Costa Smeralda.

Cagliari’s rich in history and culture, and the resorts’ nightlife is amongst the most vibrant in the Med, but the last thing I wanted was to be surrounded by other holidaymakers. I’d come to escape to Sardinia’s mountains, far from the madding crowds; to taste the fresh, seasonal, home cooked food for which the island is famed; and, I hoped, to meet local people and see their homeland through their eyes.

Driving along the almost deserted SS130, the urban sprawl quickly dissipated. Within an hour, we were driving along winding roads between towering gorges, climbing into the heart of the mountains. Craggy limestone rocks draped with trees and shrubs, interspersed with prickly pears topped with delicate yellow flowers, lined the way, and masses of brightly coloured spring flowers clung onto cracks in the rocks.

Climbing into the clouds, eventually we came to a pass between two mountain peaks, and then steadily began the long, twisty descent. I saw glimpses of the sea, hundreds of feet below, sparkling blue in the low evening sunshine. The road eventually petered out, and we rolled up to Beach Retreat along an unmade road.

Beach Retreat stands imposingly within its large and beautifully manicured gardens of fig trees, cacti, oleander, and a riot of colourful flowers leading to an infinity pool with views to the sea. David, the house manager, is an artist; the walls are covered with an eclectic collection of artworks, from vast canvasses to posters of iconic films and art exhibitions around the world, to textiles, filigree-like paper cutting, maps, prints, and objets d’art too numerous to list. The villa is a veritable art gallery. The space is airy, suffused with light, and with views that take in both mountains and the sea. If I painted or wrote poetry, this is where I’d come for inspiration.

It was already well into the evening, and to welcome us to the village, David had booked us a table at Trattoria Sole Luna, a five minute walk away. Tourists don’t come here; it’s a tiny place for the locals, run by the engaging Luca.

Don’t eat during the day if you plan to dine at Trattoria Sole Luna. The table was burdened with the weight of uncountable small plates: locally produced salami, prosciutto, and cheeses; ravioli stuffed with ricotta and spinach in a delicate tomato sauce; smoked fish roe on  the thinnest, crispest flatbread; and chunky meatballs with fragrant herbs. And this was just the first course. A dish of succulent veal cooked with garlic, wine, and white peppercorns followed. Luca’s red and white wines, plus his lively conversation about the region’s farmers and artisanal producers, their seasonal ingredients and traditional methods, were the perfect complement to the meal. Nearly everything we tried had been grown, reared, and prepared within a stone’s throw of the restaurant.

Beach Retreat is in the part of Sardinia known as the Mining Coast. It was the world’s first Geological and Mining Park, recognised as a UNESCO World Heritage Site in 2001. Archeologists believe mining started here before the 1st millennium BC, and the whole area seems like an open air museum dedicated to mining.

Also Read:
The Normal Heart at the National Theatre is a desperate howl

The best way to counterbalance all that you’ll be eating in Sardinia is by walking. We set off along the coastal trail, hiking on the very boundary of sea and land, clambering among the majestic sand dunes. I was constantly astonished by the vast skeletons of abandoned mining villages silhouetted against the bluest sky. The scenery is dramatic, with peaks of limestone clothed in foliage dipping down into the sea.

Remarkably for the Mediterranean, the white sand beaches were all but deserted. Even on a gloriously sunny Sunday lunchtime, we were alone as we walked along the sandy expanse of Portixeddu Beach. This particular stretch of coastline is hardly unknown — Rick Stein filmed here on his Sardinian adventures — and yet it remains wonderfully quiet.

Stein’s favoured seafood stop, L’Ancor, offers a mouthwatering menu of octopus cooked with herbs and olives; squid and sun dried tomatoes in a dark, inky sauce; slivers of tuna smoked just along the beach; and steaming bowls of mussels, locally gathered and flavoured with nothing more than olive oil and herbs. The restaurant’s speciality is a crisp, feather-light, deep-fried pastry, stuffed with liquid pecorino cheese, and  suffused in the sweetly perfumed honey of the region. We ate it all, unable to deny ourselves the smallest morsel, and again were the only outsiders dining.

Walking trails along the beach and beyond, varying from five hours to five days in length. You can follow ancient mule tracks to turbulent waterfalls and spectacular caves, abandoned silver and zinc mines, and archaeological sites dating to before the 2nd century BC.

The southwestern part of Sardinia in which the Mining Coast falls boasts 1,000 km of walking routes and as many again for cycling and horse riding. There are hundreds of walls suitable for climbers, with limestone crags and granite rocks overhanging the sea or within dense cork, juniper, and eucalyptus forests. Preferring to keep my feet on the ground, however, I focused on exploring the trails, keeping my eyes and ears open for the telltale signs of Sardinian deer, wild horses and boars, eagles and buzzards, and more.

Reaching the small village of Fluminimaggiore, we stopped at the tourist office for information on the surrounding archeological sites, many of which are well hidden and scarcely marked. I’d assumed that a rudimentary knowledge of Italian would suffice, but it turns out that although technically part of Italy, Sardinia has its own language that isn’t remotely linked to Italian. We fell back on English to talk.

The jewel of Fluminimaggiore is the Temple of Antas, built at the head of a splendid valley, and dating from the 3rd Century BC. The temple honours the god Sardis Pater Babai, the main male divinity of the native Nuragic Civilisation. Majestic columns and a fast fading mosaic floor indicate the wealth of the site. As we explored further afield, picking out the foundations of circular stone buildings which were easily seen in the dry grass, the extent of the surrounding Nuragic village became evident, too. It is not difficult to imagine the thatched huts, closely packed together, and I pondered about the people who lived here.

Running past the site are the remains of a Roman road, a relatively recent construction in Sardinese terms. With the toe of my boot I scraped away the thin coating of stony soil to reveal large, smooth blocks of limestone. The road was wide enough for two carriages to pass, and so much of it survives that we were able to follow it through the scrubland for almost an hour.

In four days we saw spectacular mountain vistas and pristine beaches, and more than 3,000 years of human history. We feasted like royals, and walked until our legs were worn out. Not once did we see another tourist; foreigners, it seems, don’t venture this far, and so when we stepped into trattorias and cafes, we were treated as locals and friends.

Sophie and Sharon stayed at Beach Retreat in Sardinia with luxury villa holiday specialist CV Villas (0207 261 5402; www.cvvillas.com). The villa sleeps up to 16 and is situated in the coastal hills of north west Sardinia, close to Portixeddu Beach. A week’s stay starts from £182 pp (£2,910 total).