Straight up with a smile: How the Connaught made the martini a star 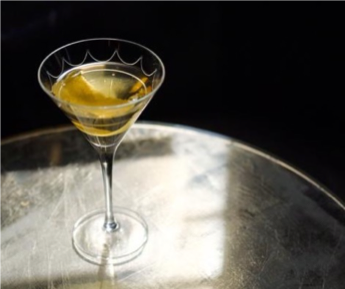 It’s one of the best bars not just in London but the world – and the iconic Connaught Bar in Mayfair is known the world over for its martini. City A.M. caught up with Ago Perrone, Director of Mixology at The Connaught Hotel, and Giorgio Bargiani, Head Mixologist at the Connaught Bar, to talk cocktails, creativity and the capital ahead of National Martini Day on Friday 19th June. They also share their top tips for the perfect drink, and a couple of recipes to experiment with.

The martini is more than a cocktail. From Bond to Sinatra to Churchill – “The only way to make a martini is with ice-cold gin, and a bow in the direction of France” – it’s a gloriously decadent part of life.

Luckily, London is not shy of places that have made the martini their own. The vermouth-covered carpet at Dukes and the luxuriant surrounds of the American Bar at the Savoy are certainly worth your time. But in Mayfair, the Connaught has gone above and beyond.

“The martini represents the perfect marriage between two of the most elegant and classic spirits, gin and vermouth, yet it has found its way into people’s heart and palates since it lends itself to so many variations and occasions,” say the duo behind the magic – Italians Ago Perrone and Giorgio Bargiani.

“It is also thanks to its classicism and its intriguing history – linked to literature and cinema – that the Martini is so iconic, not only as a drink but as a moment,” they say.

It’s certainly a ‘moment’ at the Connaught. Rather than behind a bar, the cocktail is made on a trolley wheeled directly to the table. Bartenders explain the signature vermouth blend, the choice of five aromatic bitters and the base spirit, the Connaught Bar Gin, and then set to work.

“The experience culminates in the final pour which on top of aerating the drink adds theatre and excitement,” they say. Anybody who has seen the near metre-long waterfall of an ice-cold martini from across the bar doesn’t stop talking about it for a week.

“We serve our martini always with our motto ‘straight up with style and don’t forget the smile.”

Perrone started bartending at home near Lake Como to fund a photography course, but soon found himself taken in by the chance to get creative behind the bar. After attending a bartending school he moved to London and by 2008 was given the keys to the soon-to-be-revamped Connaught Bar. Since then it’s regularly atop lists of the best cocktail bars in Europe and the world.

Bargiani comes from a family of restaurateurs in Pisa and after working in luxury bars both in Italy and the UK started at the Connaught in 2014. He’s now Head Mixologist alongside what he calls “one of the strongest bar teams I have ever seen.”

In short: they know their stuff. “Everything we do might seem pretty easy and natural once we deliver it, but the truth is that creating a blend that is flavoursome and balanced at the same time requires all of our dedication and knowledge,” they say.

“For the aromatic bitters, we wanted a collection of aromas that could give our Martini a unique element without moving away from the elegant classic.”

Sourcing and engineering the five bitters used at the Connaught – lavender, tonka, ginseng & bergamot, cardamom, coriander seeds – was a “labour of love” they tell us, and they’re just as serious about their choice of gin.

“There is so much variety in that category that we eventually decided to create our own Connaught Bar Gin for a mix of botanicals that would both embody our character and enhance our Martini cocktail. Star of Bombay is also a great base for any martini, it is a canvas for creativity and really lends itself to so many combinations.”

Unsurprisingly the pandemic has given both of these creative geniuses the chance to experiment at home.

“We seized this period as an opportunity to experiment with flavours at home but, above all, to come up with new ways of connecting people and supporting each other.

“Serving our guests and delivering great experiences is what we love the most, but in absence of this element, we have worked a lot to create bespoke home-made recipes that we could share with both consumers and bartenders and continued to be in touch through masterclasses, webinar but also charitable activities to ensure we could still be present and support our community – be this our network of colleagues, our guests or our local neighbourhood and frontline workers.”

One cannot ignore, of course, the damage that the Covid-19 crisis has already inflicted on London’s hospitality trade. It’s not difficult to find people pessimistic about the future of many establishments, but Ago and Giorgio are different – confident the capital will bounce back quickly.

“London is hospitality. This is the city where everyone working in the sector aspires to head to,” they say.

“The challenge has been unprecedented and like anywhere else in the world we will feel the impact for a while, but as a community we will find new creative ways to thrive again and perhaps more than ever before.”

“With determination and talent,” they argue, “you can mould your own path here and set new standards of creativity and excellence like nowhere else in Europe or the world. There is so much cultural variety that it is impossible not to be inspired and do something great in London.”

We’ll toast that – with a martini, please, gents.

Ago & Giorgio’s tips for the perfect martini

The secret for a perfect Martini lies in its simplicity, therefore in its details. Ice is paramount to achieve a great texture. Use crystal clear ice that you can easily make at home by pouring water into an icebox with open top. Freeze this for 36 hours. At this point, you will have a cloudy part and a clear part of the block that you need to split in order to use the crystal clear ice.

Store your vermouth in the fridge (like you would do with white wine) for an optimal temperature and if you want to go the extra mile, blend different vermouths to have a richer mix of aromas (e.g. Martini Extra Dry and Noilly Prat Dry).

The garnish might seem just a small detail, but its quality impacts the overall taste of the cocktail too. We use unwaxed organic lemon, twist and squeeze the zest while pouring the cocktail and around the glass rim for the aroma to hit the smell first. If you prefer olives over lemon, use unseated green olive in brine without olive oil.

Stir your Martini instead of shaking it. It’s a gentler and easier technique conveying a fresher taste and lighter texture to the drink thanks to a greater aeration.

Stir gin / vodka and vermouth over ice. Strain into a frozen martini glass where you have previously added 3 drops of orange bitter. Garnish with lemon zest

Cut 4 medium size apricots and keep the kernels. Put in a jar together with Martini Extra Dry (4 apricots per 1 entire bottle, or alternatively 1 apricot per 200ml). Let it rest for 12 hours, fine strain and store in the fridge.

Leave the St-Germain Elderflower liqueur rest open for a month to allow the oxidisation. The oxygen will work on the liquid over time and darken it.

Stir gin, vermouth and elderflower liqueur over crystal clear ice and strain into a frozen martini glass. Garnish with 3 drops of almond oil, one fresh cherry and a mandarin twist.