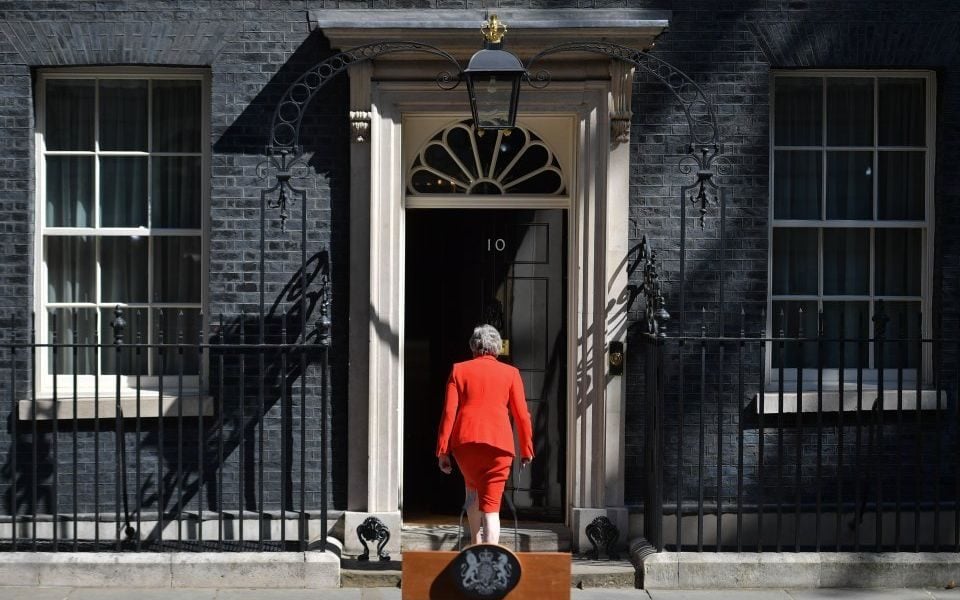 The departure of Prime Minister Theresa May ramps up the chances of Britain crashing out of the European Union without a deal, economists have warned following the PM’s speech confirming her resignation.

​Read more: Theresa May to resign as Conservative party leader on 7 June

May announced that she would resign from the post on 7 June in a tearful speech outside 10 Downing Street today, kicking off a Tory leadership race.

She said: “It will always remain a matter of deep regret to me that I was not able to deliver Brexit. My successor will have to find consensus where I have not.”

She said she had agreed with backbenchers that the process for selecting a new leader should begin the week after 7 June.

The news caused volatility in the pound, which had fallen slightly against the euro by 3pm, but had risen somewhat against the dollar. The FTSE 100 had climbed 0.8 per cent to 7,286.9.

Economists were quick to caution that a new leader could well oversee a no-deal Brexit, something analysts and investors broadly think would be economically damaging.

Ranko Berich, head of market analysis at Monex Europe, said: “Espousing a willingness to complete a no deal will probably be mandatory for aspiring May replacements, considering the savaging the Tories are receiving from the Brexit party both in national polls and European Union elections.”

Chief investment officer at UBS Global Wealth Management, Mark Haefele, said: “We believe a no-deal Brexit could take the pound as low as $1.150 and £0.970 versus the euro. At these levels we think the negative impact of a no-deal Brexit on the UK economy would be fairly reflected.”

In the case of a further Brexit delay, “lingering uncertainty would likely cause firms to delay investment, and add more volatility to sterling, with intermittent relief-rallies as investors hope for a negotiated outcome,” he said

According to Andrew Goodwin, associate director at Oxford Economics, said a “sharp depreciation” in sterling would follow a no-deal Brexit. He said: “Under those circumstances, consumers would face the less than tantalising prospect of a couple of years of much higher price hikes.”

Paul Dales, chief UK economist at Capital Economics said his organisation was increasingly moving away from its “deal by 31 October scenario,” which he thinks would see GDP growth rising from 1.5 per cent in 2019 to 2.2 per cent in 2021.

“We believe enough sane heads in the Tory party would abstain or vote against the government in a confidence vote – which the Opposition can call at any time – to stop it in its tracks,” he said.

Haefele said there was “a rising chance that the UK will be compelled to ask the EU for a further delay to Brexit”.

“Lingering uncertainty would likely cause firms to delay investment, and add more volatility to sterling, with intermittent relief-rallies as investors hope for a negotiated outcome,” he said.

Dales said: “Despite the political chaos the economy is in reasonable shape. The unemployment rate is at a 44-year low, wage growth is not far off its recent 10-year high.”

“The economy is well positioned to cope with a further delay to Brexit and we think it would probably be more resilient to a no deal Brexit than is widely believed.”