Each month, writers at Schroders pull together the most intriguing charts of the month.

The US came to a standstill on 21 August as people looked skyward to witness a remarkable solar eclipse. But as the moon blocked the sun it also temporarily blocked solar energy production.

California aims to generate 33% of electricity from renewable sources by 2020.

The main grid operator in the state, California Independent System Operator (CAISO), currently has around 29% of installed capacity in renewable energy sources. Of this 29%, almost half is in solar, close to 10,000 megawatts (MW).

As the chart highlights, installed capacity is not always available for distribution. Solar production varies by the weather and time of day.

Although California State experienced only a partial eclipse on 21 August, the impact on solar energy production was marked. Across the length of the state, obscuration (the amount of the sun covered by the moon) ranged from 58-76%.

Ahead of the eclipse, CAISO estimated this would likely result in a loss of around 4,194MW of solar power production. The grid operator had spent a year planning for the event, in order to ensure it could offset this impact and still meet electricity demand. At the time of the last US eclipse in 1979, no solar generation was connected to the California grid. 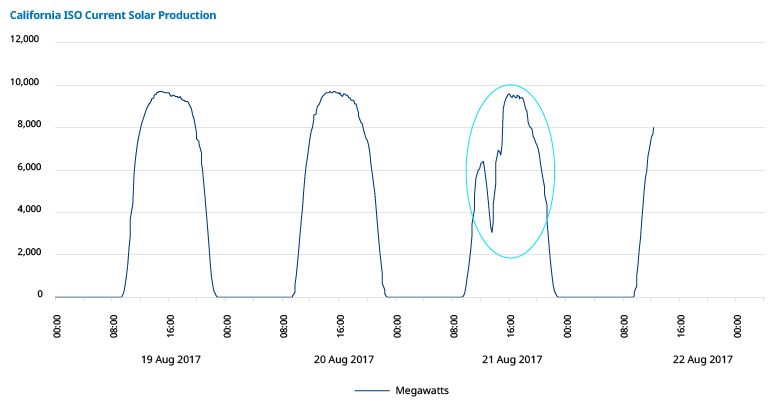 US dollar weakness is usually a positive signal for Asian stockmarket performance. It generally results in an increase in capital inflows, boosting demand for stocks in the region. It’s also good for those Asian companies which have loaded up on dollar debt in recent years, as the cost of servicing that debt is lowered. For a US dollar investor, local currency gains amplify stockmarket returns in the region.

Recent weakness in the greenback has seen the dollar index fall -8.9% year-to-date, but has coincided with robust returns for Asian stocks. The MSCI AC Asia ex Japan index has seen gains of 28.2% in the same period, comfortably outperforming returns from global equities.

It remains to be seen how long this run can last and whether it will reverse on the back of renewed US dollar strength or more hawkish signs on rates from the Federal Reserve. 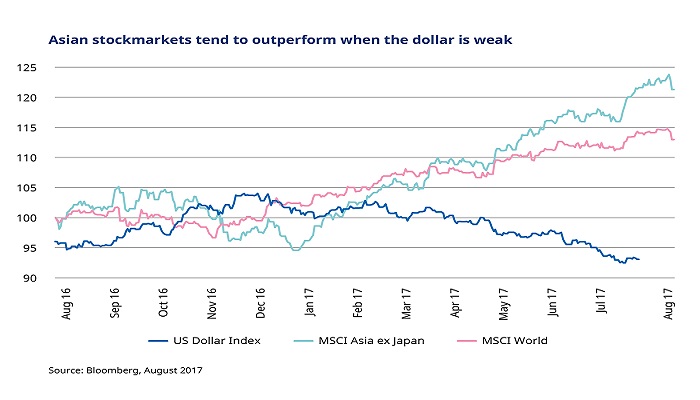 Bitcoin, the cryptocurrency, is still relatively new and not necessarily widely understood. It is defined as an open source peer-to-peer currency and a digital payment system. It operates without any central authority, bank or administrator, with payments processed directly between participants on an open network.

Its origins are also somewhat murky. It was founded by an unknown programmer. But this hasn’t stopped Bitcoin quadrupling in value, in US dollar terms, since the start of the year, following a 60% surge in August.

One source of increased demand for Bitcoin has come from initial coin offerings (ICOs) — unregulated issuances of crypto coins where start-up companies can raise money in bitcoin or other crypto currencies.

There is also a suggestion among analysts that the performance in August, taking place against a backdrop of increased market turbulence, indicates Bitcoin is coming to be regarded as something of a safe haven asset.

Aside from Bitcoin there are over 800 other ‘alt-coins’ with a total market capitalisation of around $50 billion. The spike in Bitcoin in August was precipitated by the cryptocurrency being split into Bitcoin and Bitcoin Cash following surging demand year-to-date.

The rapid increase in volume had caused difficulties in processing of payments with Bitcoin Cash designed to allow faster execution. There were also suggestions in the financial press of disagreements among key Bitcoin stakeholders. 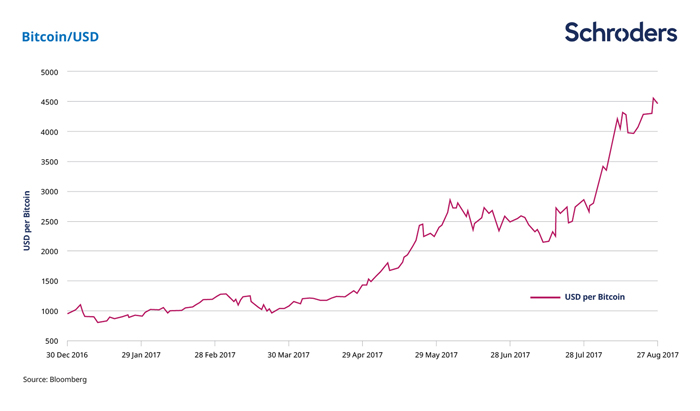 Short-sellers get their teeth into FANGs

Eight out of the 12 most-shorted stocks in the US are from the tech sector, and the short interest is growing, according to latest data from S3 Partners.

If, as is frequently argued, Elon Musk’s Tesla is categorised as a tech stock rather than a car manufacturer, that figure rises to nine out of 12.

Investors “short” a stock when they expect the price to fall.

The tech sector, which includes the so-called “FANG” quartet of Facebook, Amazon, Netflix and Google (now Alphabet), has outperformed strongly in recent years. As a result, valuations have risen to levels that make some investors (including our Value team) nervous. 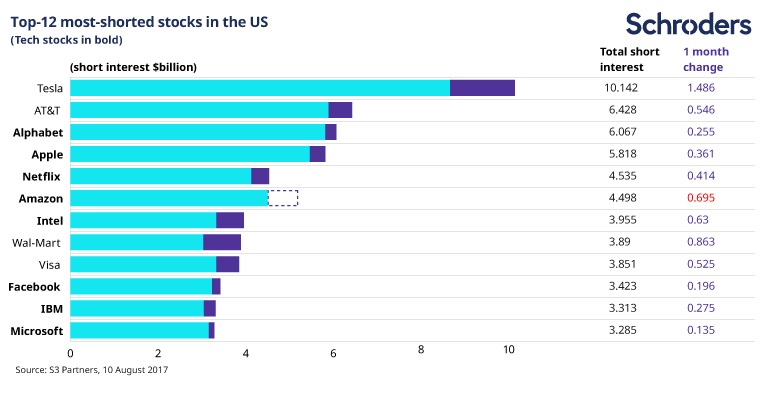 Last month, Schroders economists explained how steady global growth and low inflation meant we remain in a “Goldilocks” environment. This is a scenario where activity is – like the little girl’s porridge in the fairy tale – neither too hot nor too cold.

Chief Economist Keith Wade and his team continue to forecast global growth at 3% this year, after 2.6% in 2016. But they have trimmed their inflation forecast to 2.3% from 2.4%.

Looking into 2018, global growth is expected to remain stable at 3% with modest downgrades to the US, offset by upgrades to the eurozone and emerging markets. 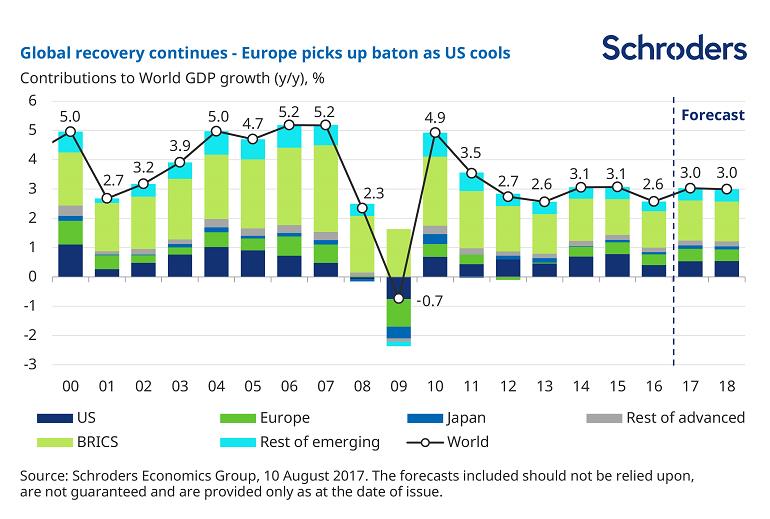 During the past few years of ultra-low interest rates, investors have largely favoured stable stocks offering attractive dividend yields. These were typically higher quality stocks in the healthcare and consumer staples sectors.

Sometimes described as “safe havens”, these are both sectors that enjoy demand for their products regardless of what’s going on in the economic cycle. As the chart below shows, the valuations of these two sectors ran up to peak levels in late 2015/early 2016 before starting to fall back again.

Both sectors are now significantly cheaper than they were a couple of years ago. However, they are still not far below their peak valuations and many investors would consider them to remain expensive, despite the recent declines. 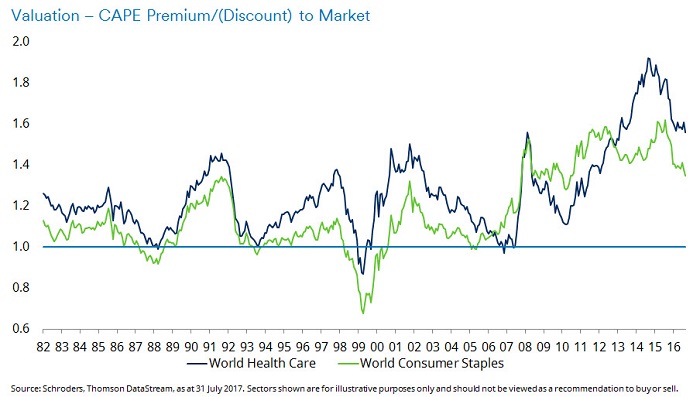 Despite some concern over the move away from the BBC this season, the charm of the iconic big white tent (where the baking contest takes place) appears to remain unscathed.

But the positive influence of quintessentially British shows like Downton Abbey and “Bake Off” could be about more than just food for the soul. They may have also contributed to a sharp acceleration in the UK’s food and drink exports to China in the past two years.

There has been a particularly steep climb in goods relating to “afternoon tea”.

In 2016, tea exports from the UK to China rose by 63%, and milk powder exports increased by 134%. Cake exports climbed 26% and spring water leapt by 139%, according to the Food and Drink Federation. 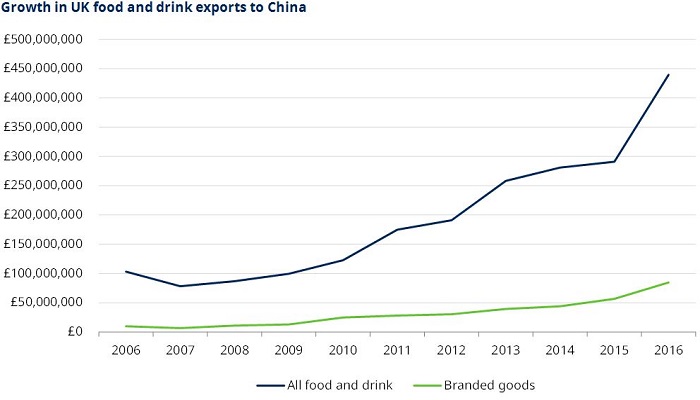