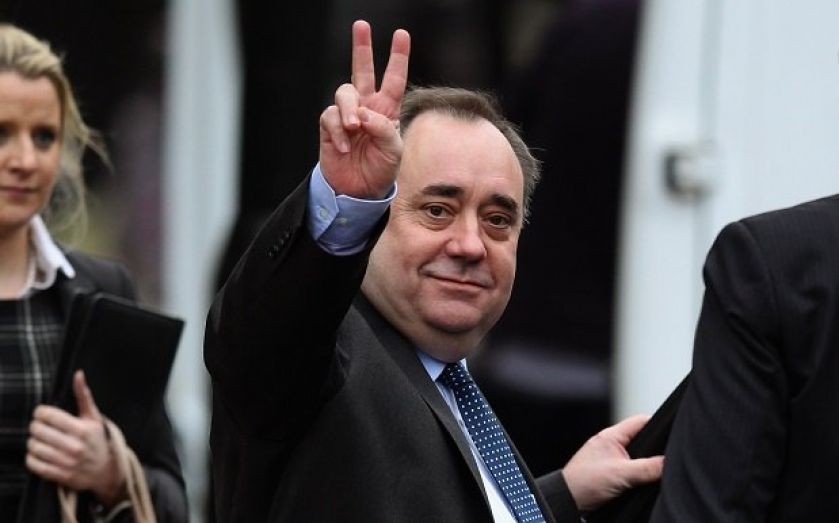 Well, that's it. The last debate on Scottish independence ended with a victory for the SNP leader Alex Salmond, according to a snap ICM poll for the Guardian.

71 per cent of those polled thought Salmond clenched it while only 29 per cent gave it to Darling.

Alistair Darling and Alex Salmond clashed over issues ranging from currency to the NHS. Salmond opened the debate saying the eyes of the world were focused on Scotland.

"No-one will run this country better than the people who live and work in Scotland.

"This is our time. It is our moment. Let us do it now," he added. Darling began his opening statement with an attack on the SNP leader, saying Salmond is "asking us take his word for it on everything" and that he wanted to create a separate state regardless of the costs or the risks.

The first question, unsurprisingly, focused on the future of Scotland's economy. Darling dived straight into the currency issue, claiming there were numerous dangers should Scotland withdraw from the Union, principally that Scotland's fiscal policy would to a large extent need the approval of the Bank of England.

Salmond was having none of it, answering directly "Yes, Scotland will be safe and secure as an independent country." He focused on the Social Democratic vision for Scotland, one which would in his view repair the damage done by the Thatcher revolution.

Next up was oil. The two men differed sharply over how much extractable oil there was left in the North Sea, with Darling arguing projected revenues from the North Sea have been over-estimated, and that oil was notoriously volatile and unreliable as a permanent source of wealth for an economy. Salmond countered, citing recent reports of the wealth of energy remaining in the North Sea and UK governments consistent underestimates of the amount of extractable oil left.

The battle over currency was heated. Salmond said there was nothing anyone could do to stop Scotland from using the pound. He challenged Darling to state whether if the people of Scotland back the plan to keep the pound would he accept that?

Darling refused to say what a plan B should be if Scotland votes yes, calling all options second best to the current arrangement. However, Salmond seized the moment when Darling conceded that an independent Scotland could use the pound sterling.

Both men throughout the debate were barely able to restrain themselves from raising their voices or interrupting eachother every 30 seconds.

On the NHS, the former Labour chancellor argued Salmond was peddling scare stories about privatisation. The Scottish first minister said he did not argue that the NHS faced privatisation but that it would face severe spending constraint should Scotland stay in the Union.

Other issues tackled in the debate included jobs, the future of Trident and Welfare spending. A buoyant Alex Salmond ended his closing statement saying "this is our time, our moment, let's seize it with both hands."

Alistair Darling rounded off the nights proceedings reiterating the importance of the currency question:  I make no apology for returning to the issue of currency, because it is fundamental to the economy of Scotland."

We have no option but to say politely but firmly No thanks to independence."