These were a 'noisy' set of Q1 results from RBS, but probably look 'worse than the reality'.

Back in the dividend-paying ranks and with shares up by as much as 25 per cent in 2019, The Royal Bank of Scotland (LSE:RBS) provided investors with a reality check as the state-backed lender warned its recent progress could be hampered by near-term challenges around Brexit.

The disappointing set of first quarter results unnerved the City, particularly after the announcement that respected CEO Ross McEwan is to go after more than five years in charge. Shares fell 5 per cent as analysts scaled back their earnings forecasts, although this guidance is unlikely to undo the recent momentum of RBS now being seen as a "buy".

Shore Capital reiterated its price target of 300p, while UBS remains at 290p as one of its three buy recommendations in UK banking — the others being Lloyds Banking Group (LSE:LLOY) and Barclays (LSE:BARC).

Much will now depend on an end to Brexit uncertainty, which RBS said was leading to business borrowing decisions being delayed and had made income growth “more challenging in the near term”. Bank margins also remain constrained, with future interest rate rises dependent on any Brexit deal. 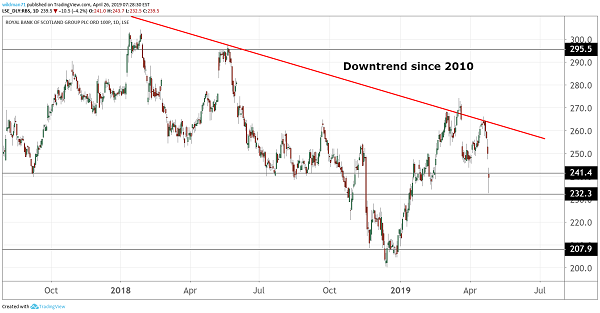 Across its retail and commercial businesses, RBS said its net interest margin of 2.07 per cent held steady on the previous quarter. It continues to support customers throughout the uncertainty, with strong mortgage growth in particular driving a £1.7 billion increase in net UK loans.

Overall, underlying profits were 9 per cent below the market consensus, with net interest income some 6 per cent below market forecasts and costs 1 per cent weaker. However, UBS analyst Jason Napier said the figures were "noisy" and impacted by accounting changes, meaning that the headline results "probably look worse than the reality".

The previous financial year had been a landmark one for the bank, with a bottom-line profit and the first dividend payments in ten years including the extra carrot of a 7.5p special dividend.

According to RBS-compiled consensus figures, the market expects ordinary and special dividends amounting to 15p a share this year, alongside share buy-backs totalling £1.4 billion.

This rises to 17p a share and £1.5 billion in 2020, as RBS reduces its common equity tier one ratio to a more normal 14.6 per cent in order to be able to release capital.

The buy-backs are likely to include the targeted purchase of the government's current 62.2 per cent stake, the presence of which continues to weigh on the share price performance. While the stock has performed well this year, it has so far been unable to revisit the 300p level last seen in 2015.

One of the key goals for RBS in 2019 will be to cut costs by another £300 million, which the bank said it was on track to achieve after a £45 million reduction in the first quarter. Longer term, it wants a cost/income ratio of under 50 per cent, although the current figure remains stubbornly high after increasing to 63.4 per cent from 60.5 per cent in the previous quarter.

Other targets for 2019 include a better customer experience and a £1 billion outlay on upgrading legacy infrastructure, improving systems and processes and delivering innovation.

UBS's Napier sees little change in this strategy or in the targets under a new CEO. The current head of RBS's commercial banking unit, Alison Rose, is seen as the front-runner for the job.