Get ready to bow down before your new mechanical overlords – everyone from Stephen Hawking to Elon Musk are warning of the dangers of intelligent machines. We look to science fiction for the likely outcome. 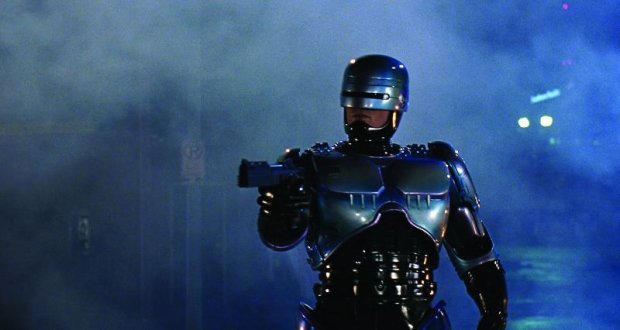 Sanctimonious, violent but ultimately just, at least we know a future run by Robocop would be fair. Fair, certainly, but fun? Not so much. “Detroit has cancer. That cancer is crime,” declared Robocop in 1987. If only someone had the guts to tell PC Robo to chill out. But it’s harsh to blame him for having a bee in his bonnet. He is, after all, the robotic reincarnation of a police officer who was brutally murdered by Detroit street thugs. As future overlords go, we could do much worse.

In this Pixar tale, it turns out robots from the future are simply adorable. Wall-e is a force for good, trundling along clearing up the rubbish humans have left all over the earth. WALL-E is here to teach us to be less greedy, do a bit of recycling, stop making such a mess everywhere, and he does it all using only two syllables (“wall-eeee”). Impressive work for a rusty toaster.

A Californian dream world in which people are more comfortable relating to their computerised toys than their fellow human beings ­– never mind a future dystopia, Her looks worryingly similar to the world we inhabit now. Scarlett Johansson plays Samantha, the sultry-voiced operating system with whom Joaquin Phoenix falls in love. As future robots go, she is on the more benign end of the spectrum. Still, in luring us into relationships with inanimate machines, Samantha and her ilk could spell the end of the human race.

OK, this is about as bad as it gets. The robots aren’t only evil, but they’ve taken over the world – AND THEY LOOK LIKE ARNOLD SCHWARZENEGGER. The Terminator is a ruthless killing machine that will stop at nothing to eradicate all humans. Enough to make you renounce your household appliances.

If you like your robots to have sex appeal, then you’ll surely fall for Ava, the eponymous machine in new release Ex-Machina. Created by a reclusive billionaire genius as the ultimate Turing test, she’s deliberately built on the wrong side of uncanny valley to see whether you’ll be attracted to her even though her wires are on show. A future full of Avas sounds like a never-ending game of Blind Date, only instead of being sent on a bad holiday, you end up going to war with the machines. Awkward.

If this is how robots turn out, then the future is just going to be weird. C3PO is a bumbling, prissy humanoid creation that would blow over in a strong breeze. He may be an excellent interpretor, but he’s also incredibly annoying and allows himself to be outsmarted at every turn by a washing machine drum on wheels. I’m not sure what the lesson for humanity is here, but he does look pretty bling in that gold chassis.

In Pacific Rim, these lumbering great machines provide the only meaningful protection from an onslaught of towering, monstrous creatures called Kaijus. Intended as a safer and less messy alternative to nuclear weapons, Jaegers are controlled by two pilots stationed inside the head of the robot. They are equipped with a special suit allowing them to simultaneously communicate with the machine. The pilots are telepathically connected via a neural bridge that allows them to control the Jaeger’s movement. Don’t fear the Jaeger, for they are the guardians of the human race.

2001’s HAL is as terrifying as the Terminator in his own rather effete way. He’s the sentient machine at the helm of an exploratory starship. He’s supposedly infallible, but appears to start making mistakes; he may have gone mad, or it may be deliberate – both equally worrying if you’re on his ship. The human crew decide to switch him off, and like any other sentient being, he’s not best pleased. In this vision of the future, robots are a potential menace, given too much responsibility over our lives. Sounds familiar.

Blade Runner poses a troubling question for the evolution of machines – what if they look and act so much like humans it becomes almost impossible to tell them apart. And what if you might be one yourself and not even know? This is the unenviable position Harrison Ford’s Rick Deckard finds himself in. In this possible future, these humanoid robots are the oppressed, leading feral lives fearing those who created them. Another ominous warning.