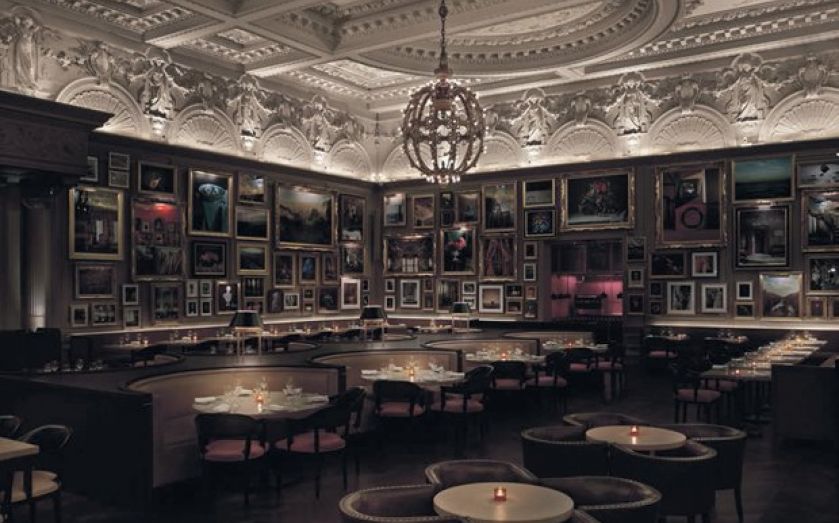 Berners Tavern sounds like a nice little place, doesn’t it? Like a Somerset country inn that’s been converted to a gastropub by an ex-Londoner with a moustache who has a passion for British ingredients and grows his own courgettes. It’s not, though. It’s the opposite of that. It’s a big, loud eating “experience”, a cross between the grand old dining room palaces of the early 20th century and the kind of restaurant that’s migrated from the US whose raison d’être is to get you sloshed enough to dance in the appended nightclub afterwards.

These places are always in hotels – there’s not enough space anywhere else. There’s no point going to an “it” restaurant if there are only half a dozen other people there to see you (people seen in Berners Tavern so far include Harry, Moss and Pixie, although the best I spotted was Winkleman). This one is in the London EDITION hotel, which demands capitalisation, as if it’s shouting the word into your cowering face through a rolled up newspaper.

Berners Tavern certainly has space: it’s vast. The ceiling towers like a cathedral of gastronomy. The cornicing looks like the skyline of tiny, faraway cities. If you plan on taking a trip to the bathroom, I hope you’ve been putting in the hours at the gym; it’s a hell of a schlep.

In fact, getting in to the restaurant is a task in itself; the door staff don’t just open the door – they interrogate you: “Why are you here”, “Are you sure you have a reservation?”, “Do you have any allegiance to known Communist groups or sympathisers?”

Gaining access to the inner sanctum of the lobby is like stepping onto the set of a Wes Anderson movie, with a hundred people performing a hundred tasks; bellboys and foreign dignitaries and minor celebrities bounce off each other like well shod whirling dervishes. Above it all looms an ominous reflective orb like the sentient metallic blob from Michael Crichton’s The Sphere. It follows you with its single, gleaming eye with a look that says: “I know…”

Why would you want to go there for dinner, you might ask. It sounds completely unconducive to a pleasant dining experience. Why? For the love of all that is righteous and holy, why?

Jason Atherton is why. He’s the blockbuster chef behind Michelin-stared Pollen Street Social and probably the most talented of Gordon Ramsay’s discarded protégés.

So there I was: I’d fought my way past the door staff, and ducked, weaved and elbowed my way to the restaurant, the silver eye boring into my back all the while. From here you can see the vast expanse of the dining room, even make out the faux-antique frames of the artwork that’s squeezed onto the walls like an ornate game of Tetris (there are, apparently, 185 in total). And there I stayed. Five minutes later I was still standing politely while the hostess and two waitresses had a natter. One of them made eye contact a couple of times in the way you might make eye contact with someone on the tube before looking away, slightly embarrassed. Maybe it’s unfair to mention it; maybe it was a matter of terrible urgency. Someone could have spilt Bollinger on their Louboutins, or upended a spritzer into their Chanel clutch. I bet it didn’t happen to Winkleman, though.

Winkleman aside (why do you keep mentioning Winkleman?), the crowd was mostly be-suited after-work types, bobbing their heads to the jaunty rumba soundtrack. It’s very post-Gatsby, but, you know, the Luhrmann version.

El Pye was otherwise engaged so I met a university friend who works with infectious diseases and was seeking relationship advice (the two things are apparently unrelated), which I am ill-placed to give, but made a spirited attempt at nonetheless.

It started well. I had a pork and pistachio pate that was rustic and homely enough to have come from the fictitious Somerset inn described above. She had the scallop ceviche served with a little ball of lime ice. It was simple and delicious; fancy without showing off.

For my main, the veal chop, which was as sweet and tender as a veal chop should be, albeit somewhat impinged upon by a dollop of lemon puree that infused the whole plate with a mild but lingering bitterness.

The halibut opposite was so small you could have glued it onto an envelope and posted it, which would probably be interpreted as some kind of fish-based protest against the privatisation of the postal service. It’s a shame, because what was there was excellent. For £24, though, I’d have wanted a second piece – the accompanying pan of squid ink risotto and calamari wasn’t enough to compensate.

Dessert was where the wheels properly fell off. The blackberry compote with goats cheese sorbet didn’t work. At all. The constituent parts tasted alright, but together it was like eating something you’ve found at the back of the fridge; it should be sweet but it’s haunted by the taste of cheese. The sweet potato brûlée was exactly like sweet potato made into a brûlée. I’ve spoken about desserts made out of potato before – if anyone could change my mind about them, it would be Atherton. He didn’t. It was too heavy and too stodgy and too… potatoey. He does make a divine spiced ice cream, though, which almost justifies the £7 by itself.

I didn’t go to the nightclub afterwards. Who the hell goes clubbing after a three course meal? Seriously, point them out – I want to look into their eyes to check if they have a soul. I bet they don’t. Whoever they are, they will probably love Berners Tavern – it’s essentially fine dining for people who want to chug pink cocktails and throw outrageous shapes. And there is nothing wrong with that. Really, there’s not. Listen, if it’s good enough for Winkleman…