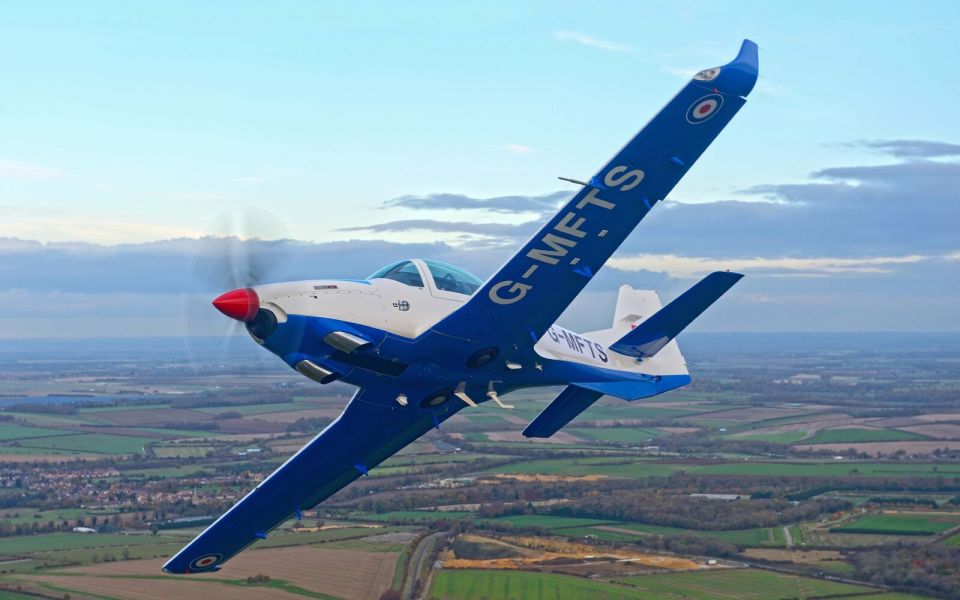 You may have heard that on 10 July, a spectacular centenary flypast is planned by the Royal Air Force (RAF) over central London.

Here's what you need to know about where to watch it, why it's happening, and what the timings are…

Read more: Take a look at the aircraft taking part in the RAF's huge centenary flypast

When is the RAF flypast?

The big day is Tuesday 10 July, with the event scheduled for 1pm.

The display is expected to be the centrepiece of the RAF's 100th anniversary celebrations, with a host of aircraft on show and celebrating the diverse roles played within the RAF through the generations.

So it's going to be big?

Yep. The RAF reckons this flypast will be the largest concentration of military aircraft seen over the capital in recent memory. The formation should pass over Buckingham Palace at around 1pm.

And which aircraft will take part?

The RAF has released a bumper list of all the aircraft expected to feature – though it has warned that all participation is subject to weather, aircraft serviceability and operational commitments.

Puma, Chinook, Juno, Lancaster, Hurricane, Spitfire, Tucano, Shadow, Sentinel and Voyager are among the names expected to take part – while the day is also set to be the first time the general public will get a glimpse of the RAF's next generation aircraft, the Lightning. 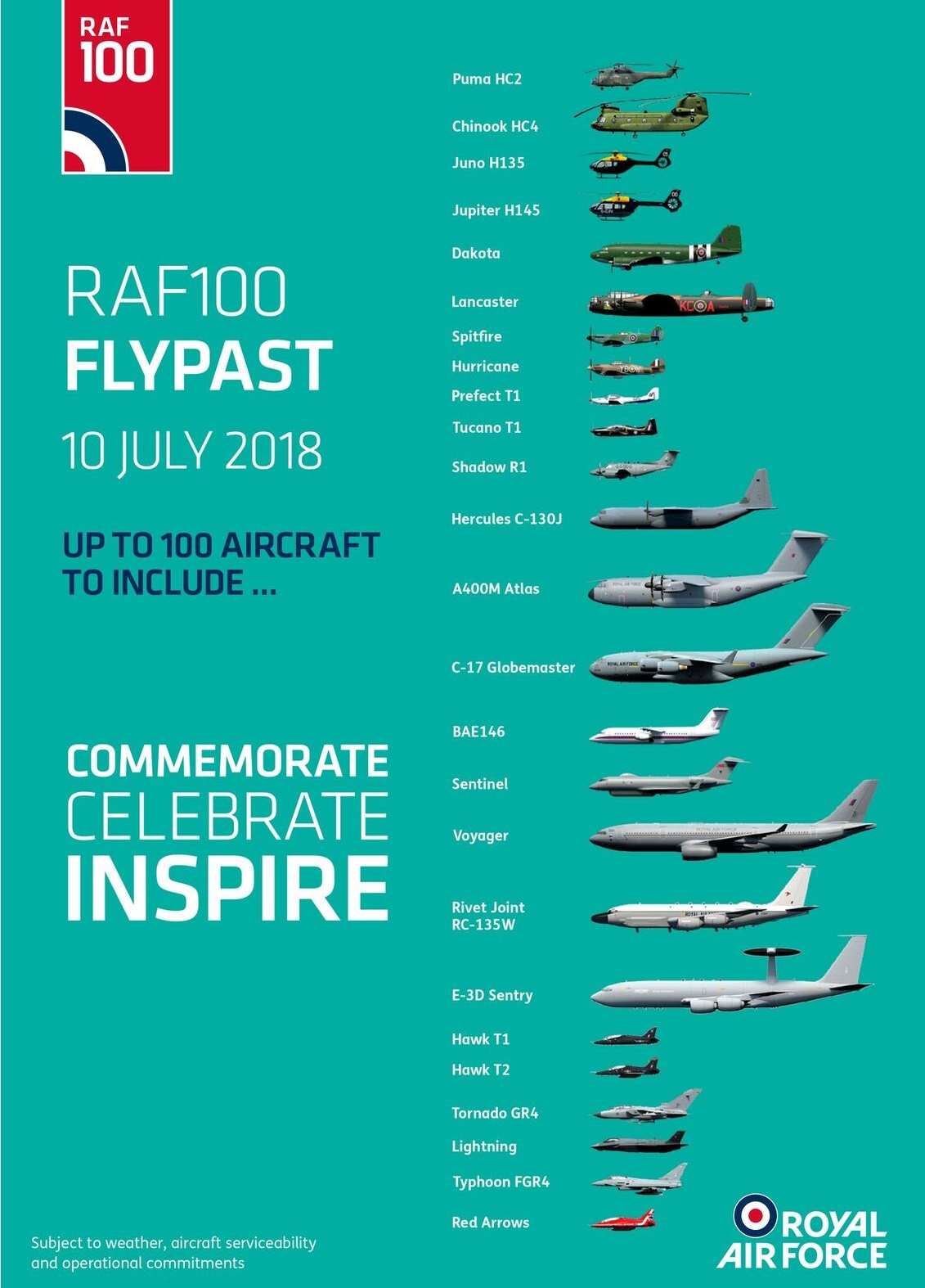 What's the order of events?

Ahead of the flypast itself, there will be a parade of 1,000 RAF personnel and another 300 lining the route. That starts at 11.25am, and will march up Horse Guards Road and The Mall towards the Palace.

So where exactly will the flypast be and when?

The flypast will begin to form up over Suffolk to the west of Ipswich around 12.45pm, skirting to the south of Ipswich itself and travelling towards Colchester.

It will pass to the north of Colchester, heading towards Marks Tey, Kelvedon and Witham before passing to the north and east of Chelmsford.

It will then continue in the same south-westerly direction, crossing the M25 to fly over Stapleford Abbotts and Hainault Forest, then onto central London.

The route to Buckingham Palace will see the formation pass over Redbridge, Wanstead, Leyton, the Olympic Park, Hackney, Bethnal Green, Shoreditch and the City of London, before the lead elements fly up The Mall and over the Palace at 1pm.

Once the aircraft have cleared central London they will begin to disperse into three groups, with the larger aircraft like Sentinel and Voyager heading in a south-westerly direction, passing over Runnymede at 1.08pm.

The training aircraft will head in a north-westerly direction over Hendon at 1.05pm, while the fast-jet element of the flypast, including Typhoon and Tornado, will fly in a westerly direction, reaching Heathrow at 1.10pm before onto Windsor and Maidenhead. They will then start to disperse and head back to their respective bases.

Where can I watch it?

Here's the route the flypast will take, and where you should be able to see it at certain points in the afternoon. The RAF says there will be viewing positions along the length of The Mall. 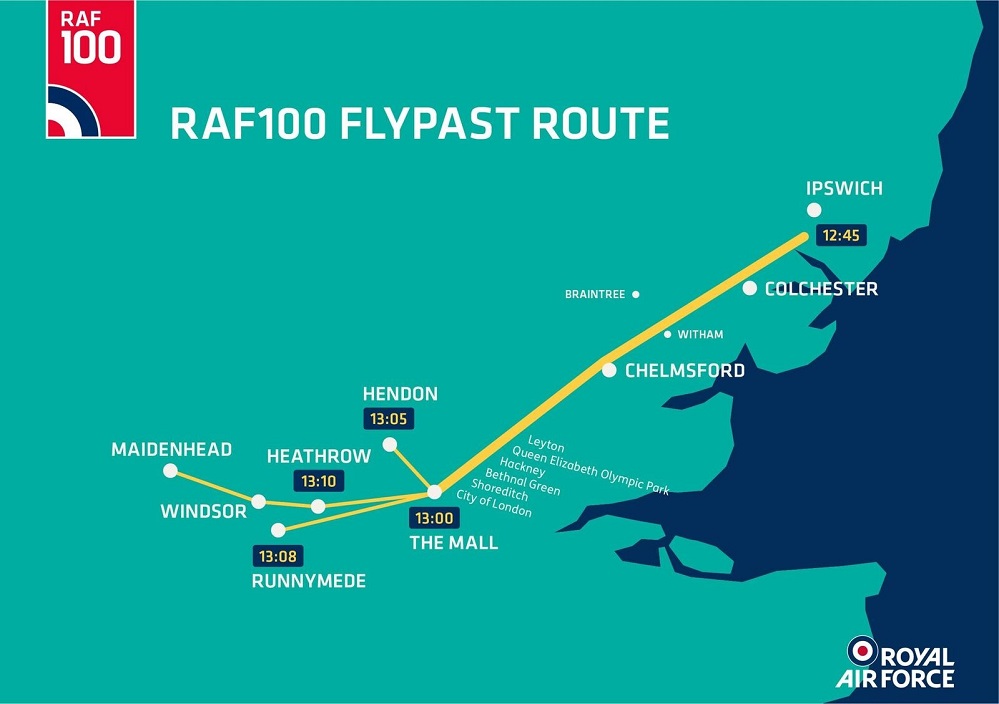 There will also be live coverage on the BBC, or you can stream it live on BBC iPlayer.

Is anything else going on?

Yes, there will also be an RAF100 Aircraft Tour on Horse Guards Parade between 6-9 July where interested members of the public can view and film a range of aircraft spanning the RAF's history, from WW1 and WW2 through to today.