Shares in embattled insurance outsourcer Quindell shot up today, following a report its board was on the cusp of recommending a £640m offer from law firm Slater & Gordon for its legal arm.

Quindell's share price jumped as much as 27 per cent to trade at around 127 pence per share this morning. This means the company's share price has increased over 200 per cent since the start of this year.

Investors are cheering the reported offer price, which is about £100m more than Quindell's current market value.

It follows a report over the weekend by the Sunday Times saying the deal was one step closer to being agreed. Quindell released a statement noting the article and confirmed it remains in discussion with Slater & Gordon.

It said: "A number of deal structures have been discussed with Slater & Gordon, including one with an up-front value of £640m and a share of receipts from settlement of Noise Induced Hearing Loss cases."

"However, there can be no certainty that these discussions will lead to any offer, or the disposal of, the PSD. Further announcements will be made, as appropriate, in due course."

Quindell initially announced it was in talks with the Australian law firm on 22 January. At the beginning of this month, the insurance claims processor released a statement saying the talks were still ongoing.

The company's share price has plummeted since the publication of a report by short-seller Gotham City.

It's since been beset by problems. By the end of 2014, chairman and founder Rob Terry had resigned, as had its broker, Canaccord Genuity, while investor Fidelity halved its stake. 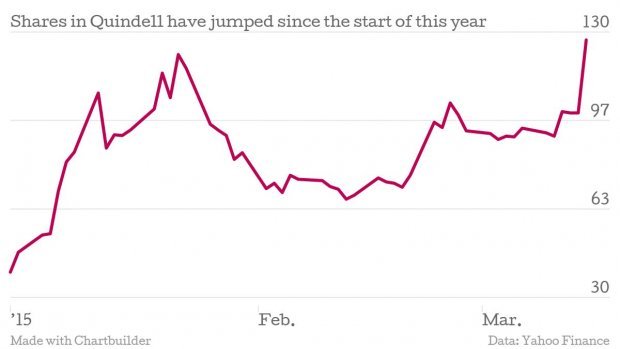